This section on game theory basics of war is relatively brief and non-comprehensive. The purpose of including a discussion of traditional war within an analysis of cyberwar is to provide some basics and points of reference for better understanding the challenges faced in cyberwar.

Players who choose not to arm themselves in preparation for war signal that they are not insecure or suspicious that other players may attack, and they seek to benefit from cooperation with other players.

Players who have armed themselves in preparation for offensive attacks may choose to attack other players.

The various combinations of actions in a two-player game are depicted in Figure 1. 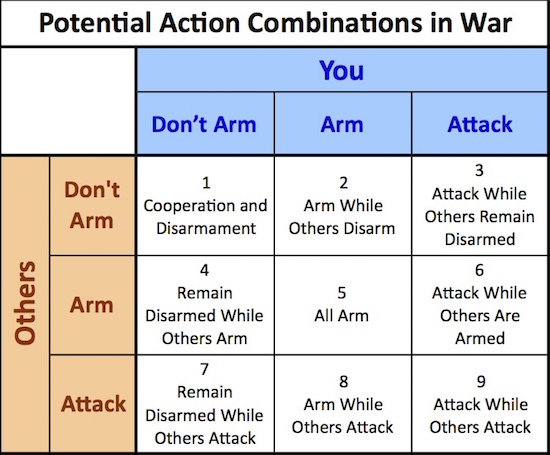 Benefits and Costs of Defensive Arming

A player faces both benefits and costs associated with choosing to arm himself against attack from other players, as opposed to choosing not to arm himself.

The Benefits of Arming for Defense

There are three clear benefits to a player who chooses to arm himself for defense. First, a player who arms against attacks is better able to defend himself from attack. That is, he will face lesser damages if he is attacked by another player.

Second, a player who arms himself increases the security of his land, resources, and people by deterring (lowering the probability) other players from attacking. More specifically, when others know a player is armed, they will have less incentive to attack because they know any damages or rewards associated with the attack will be minimized.

Third, arming oneself buys a player time to respond to other players’ actions. In particular, it generally takes time to arm oneself. As such, if a player is attacked while he is unarmed, he will incur (heavy) damages unless or until he becomes armed and is able to defend himself. Being unarmed, then, may cause a player to be hypersensitive to actions from other players trying to anticipate what others will do as soon as possible, so he can take action to protect himself as soon as there is any sign of attack. In contrast, if a player is already armed for defense, then he can be less wary of other players’ actions, since he will already be prepared in case of attack.

The Costs of Arming for Defense

Third, a player who arms himself potentially faces the costs associated with making other players feel defensive or insecure. If the weapons the player choosing to arm himself with are not clearly defensive in nature, then by arming himself, he may cause other players to feel less secure themselves. This is called the Security Dilemma. In this case, the other players may respond by arming themselves to increase their own security, and then possibly even attacking before they can be attacked themselves. The case in which a player who does not know if an attack is impending or not and thus attacks first to preempt attack by others is known as the reciprocal fear of surprise attack.

The Ambiguity of Arming for Defense

So there is an ambiguity associated with a player arming himself for defense.

On one hand, arming himself can increase the player’s safety, if it decreases either the probability others will attack or the amount of damages incurred if others do attack.

On the other hand, arming himself can decrease the player’s safety, if it induces a security dilemma for or reciprocal fear of surprise attack from other players.

Benefits and Costs of Offensive Arming and Attacking

The Benefits of Arming for Offense or Attacking

The Costs of Arming for Offense or Attacking

There are various costs associated with arming for offense and/or attacking. The first and most obvious cost is the direct cost of arming and/or attacking other players.

The third cost is that associated with developing a reputation as being an aggressive player. Such a reputation causes other players to feel less secure and more suspicious, to which they may very well respond by arming and potentially attacking (reciprocal fear of surprise attack). By arming for offense and/or attacking, the player may thus induce everyone else to become less secure.

As we have seen, there are ambiguities associated with arming. Sometimes arming can increase a player’s security, (i) by buying him time for responding to other players’ actions, (ii) by deterring other players from attacking, and/or (iii) by being able to mitigate damages associated with being attacked. Other times, arming can decrease a player’s security, (i) by making others feel less secure and subsequently arming themselves, and/or (ii) by making others more suspicious and potentially attacking preemptively. This begs the question as to which factors will determine whether a player’s arming himself will increase other players’ sense of security, and when will it decrease feelings of security? In other words, when will the security dilemma apply?

Whether Defensive Weapons Can Be Distinguished from Offensive

If weapons can easily be distinguished as being offensive or defensive, then there is no security dilemma. Weapons that are clearly defensive in nature include: large, immobile barriers against attack (e.g., fortresses); short-range guerilla warfare technologies; and militias of the people. Such weapons do not cause other players to feel threatened for their own security, and thus do not induce other players to arm themselves in response or attack preemptively.

Whether Defensive or Offense Has the Advantage

When we say that the offense has the advantage, we simply mean that it is easier to destroy the other’s army and take its territory than it is to defend one’s own…

Two questions of the offense-defense balance can be separated. First, does the state have to spend more or less than one dollar on defensive forces to offset each dollar spent by the other side on forces that could be used to attack? If the state has one dollar to spend on increasing its security, should it put it into offensive or defensive forces? Second, with a given inventory of forces, is it better to attack or defend? Is there an incentive to strike first or to absorb the other’s blow?

Jervis further notes that “technology and geography are the two main factors that determine whether the offense or defense has the advantage.”

Regarding technology, “When weapons are highly vulnerable, they must be employed before they are attacked.” Otherwise, technology tends to favor the defense.

Anything that increases the amount of ground an attacker has to cross, or impedes his progress across it, or makes him more vulnerable while crossing, increases the advantage accruing to the defense.

There is another issue that is important in determining whether a player feels secure or not in the face of another player’s arming himself: The amount of time the player has to make a decision regarding which action to take. In particular, how long can a player wait to receive unambiguous information from other players as to the intent of their actions? And how vulnerable to attack is the player?

According to Jervis, players that are larger in size, have more defensible borders, or have more protections against attack are less vulnerable to attack and thus have more time to decide how to respond to other players’ actions. Conversely, smaller countries with fewer buffer zones or countries that face more mobile (or long range) weapons are more vulnerable to attack. These countries have less time to respond to actions take by other players and they are more likely to “attack at the slightest provocation rather than wait to be attacked.”

Jervis provides a useful table for understanding the combinations of variables that are more likely to produce a security dilemma, which I have provided as Figure 2. 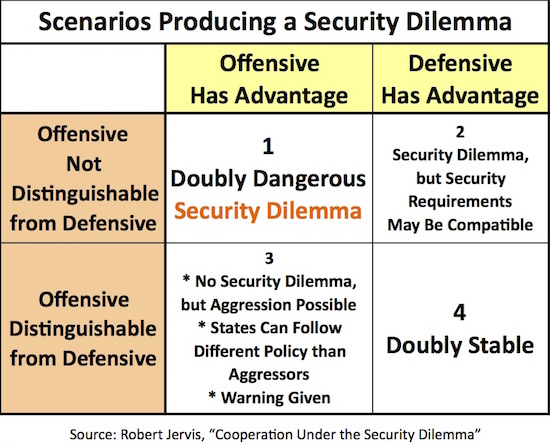 When offensive weapons are not clearly distinguishable from defensive weapons but defense has the advantage (cell 2 in Figure 2), then there still exists a security dilemma. However, players may be able to arm to make themselves more secure without causing other players to fear a preemptive attack, since, by definition it is more advantageous to defend than attack.

When offensive weapons are clearly distinguishable from defensive weapons and offense has the advantage (cell 3 in Figure 2), then there is no security dilemma. Player might feel threatened or insecure if others arm offensively, but they are correct in feeling insecure.

Offense having the advantage leads to an arms race between the players, together with incentives for preemptive attacks, which increases the chance of war. According to Jervis, if defense is at least as potent as offense, then defense can follow a different strategy by choosing to arm defensively and waiting to see what happens. As long as the defensive party can distinguish offensive from defensive weapons, he can wait until the offensive party starts to arm offensively, which will take time to complete, thereby giving the defensive party time to respond accordingly.

When offensive weapons are clearly distinguishable from defensive weapons and defense has the advantage (cell 4 in Figure 2), then the situation is “doubly stable,” since neither player will be either ambiguously threatened or preemptively attacked by the other player.