As of January 1, 2014, all public and private healthcare providers and other eligible professionals (EP) must have adopted and demonstrated “meaningful use” of electronic medical records (EMR) in order to maintain their existing Medicaid and Medicare reimbursement levels.

The adoption of EMRs created the big push necessary to compel many participants in the healthcare system to finally digitize their records and activities. The onslaught of digital healthcare information that is now becoming available is inducing massive changes in the way healthcare providers operate. In particular, payers (insurance companies, Medicare, and Medicaid) are now using “pay-for-performance” (P4P) systems. Under these new payment systems, a portion of the reimbursements that providers earn for healthcare services they provide patients have become contingent upon the providers achieving “good patient outcomes”. Part of the intent of P4P systems has been to encourage more “patient-centered care”, in which patients and providers increase their levels of collaboration, in an effort to increase the quality of healthcare services and outcomes for patients.

The ARRA also increased funds available for wellness programs. These programs provide encouragement and support for people to achieve and/or maintain healthy lifestyles.

The ACA was enacted to increase the quality and affordability of health insurance, lower the uninsured rate by expanding public and private insurance coverage, and reduce the costs of healthcare for individuals and the government. It introduced mechanisms like mandates, subsidies, and insurance exchanges. The law requires insurance companies to cover all applicants within new minimum standards and offer the same rates regardless of pre-existing conditions or sex. Additional reforms were increased competition, regulation, and incentives to streamline the delivery of healthcare.

The ongoing evolution of the healthcare industry, combined with the newly created rules and incentives engendered by the ARRA and the ACA, have created numerous tensions between doctors, patients, and payers. This analysis examines those tensions and attempts to assess how the different players will ultimately react.

Historically, physicians practicing in the US have had a strong desire for independence and autonomy. This is reflected by the preponderance of physicians working in smaller private practices, as opposed to working in larger groups or hospital settings. As from Suzanne M. Kirchhoff, “Physician Practices: Background, Organization, and Market Consolidation” notes,

Most Americans enter the health care system through their local physician’s office, which is the setting for 84% of primary care visits. Historically, physicians have operated in what the American Medical Association and others have called a “cottage industry” of small or solo practices around the country. Even now, the majority of the approximately 972,376 doctors and residents in the United States work mainly from smaller, office-based practices.

As Figure 1 (taken from “Clinical Integration – The Key to Real Reform”) illustrates, about half of physicians practice in offices with just one or two physicians.

In 1990, Medicare expenditures totaled $111 billion. That number has more than quintupled today [2012]. But even as Medicare costs have skyrocketed, the individual payments to physicians for services rendered have plummeted—particularly for surgical procedures. 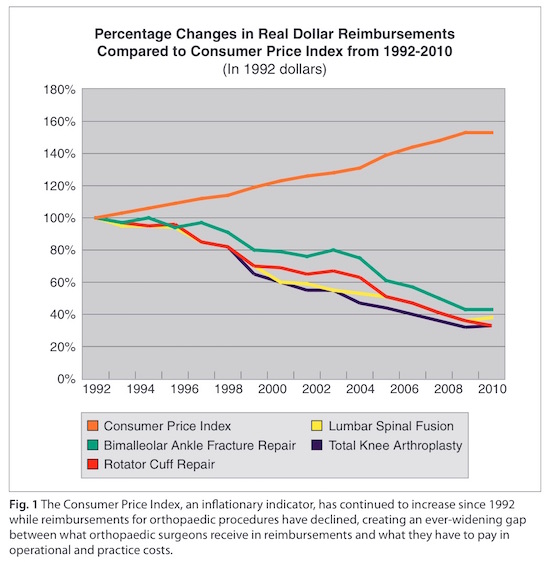 Another trend that’s been encouraging physicians to changing their status from being independent to being hospital-affiliated is the increasing divergence in reimbursements by provider affiliation. More specifically, reimbursements for the same exact procedure are greater when performed by physicians affiliated with hospitals than by independent physicians. In “When Hospitals Buy Doctors’ Offices, and Patient Fees Soar,” Margot Sanger-Katz explains this phenomenon in greater detail.

Medicare, the government health insurance program for those 65 and over or the disabled, pays one price to independent doctors and another to doctors who work for large health systems — even if they are performing the exact same service in the exact same place.

The heart doctors are a great example. In 2009, the federal government cut back on what it paid to cardiologists in private practice who offered certain tests to their patients…

But the government didn’t cut what it paid cardiologists who worked for a hospital and provided the same test. It actually paid those doctors more, because the payment systems were completely separate. In general, Medicare assumes that hospital care is by definition more expensive to provide than office-based care.

You can imagine the result: Over the past five years, the number of cardiologists in private practice has plummeted as more and more doctors sold their practices to nearby hospitals that weren’t subject to the new cuts. Between 2007 and 2012, the number of cardiologists working for hospitals more than tripled, according to a survey from the American College of Cardiology, while the percentage working in private practice fell to 36 percent from 59 percent. At the time of the survey, an additional 31 percent of practices were either in the midst of merger talks or considering it…

In the last few years, there have been increases in the number of doctors working for hospitals across the specialties.

Under the ARRA/ACA, Payers (insurance companies, Medicare, Medicaid) are changing the way they reimburse physicians. Specifically, payers are transitioning from a fee-for-service system to a pay-for-performance system. Under the traditional fee-for-service system, physicians are reimbursed for each treatment they provide patients. Under the new pay-for-performance system, a portion of physicians’ reimbursements is now dependent upon the quality of care they provide patients.

Quality of care is enhanced by

•  Greater access to information (achieved through investments in IT, EMR and other resources),

•  Greater coordination across providers (achieved though a combination of such factors as investments in IT and EMR, greater communication, and co-location of practices),

All of these inputs into enhancing quality of care require physicians to make greater time and money investments in the services they provide.

In addition to increasing physicians’ time and money costs, the transition from a fee-for-service system to a pay-for-performance system also ends up shifting much of the risks associated with the costs of caring for patients from the insurance companies onto the physicians.

While reimbursements for physicians’ services have been declining, the costs to physicians of practicing medicine have increased. In 1975 the Centers for Medicare and Medicaid Services (CMS) developed a measure of practice cost inflation called the Medicare Economic Index, (MEI). According to Wikipedia,

The MEI was designed to measure changes in costs of physician's time and operating expenses, adjusted for changes in physician productivity. 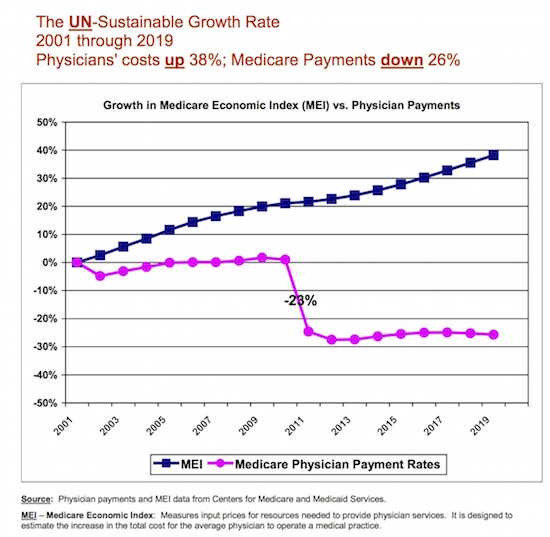 The people who take care of people know first-hand that many of today’s health care regulations are too complex and inefficient, yet new ones are imposed on the system everyday. Health care workers strive to keep up with these regulatory requirements but are frustrated when their time and energy is diverted from their primary purpose—providing quality healthcare to patients—to trying to decipher and comply with the bureaucratic controls that often seem detached from good care and efficient use of resources.

But how much time does a physician spend on paperwork and regulatory compliance, beyond writing diagnoses, medical orders and prescriptions? 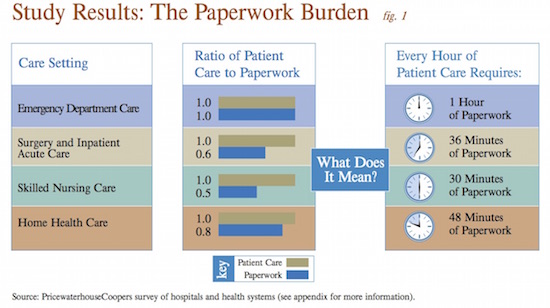 What it comes down to is that all the new regulations and compliance measures associated with the ARRA and the ACA will further increase the already tremendous burden on physicians.

The higher costs and greater regulations associated with practicing medicine, coupled with decreasing reimbursements, have been leading physicians to consolidate. Economies of scale help reduce the per-physician costs associated with performing insurance, regulations, and compliance requirements.

At the same time, larger practices and affiliations have more leverage in dealing with insurance payers and are thus able to negotiate higher reimbursement rates.