The players in the Food Technology Game include

Government establishes standards and regulations, which affect the price, health, and safety of food supplied by Farmers, Food Companies, and Retailers.

Farmers have different technologies available to them for increasing the productivity of their food supplies, such as machinery, chemicals, genetically engineering, and information/communication technologies.

When it comes to demand for food, Consumers care to greater or lesser extents about

That is, Consumers have different preferences over the use of certain technologies by Farmers, Food Companies and Retailers. Furthermore, Consumers’ preferences are dynamic – they change over time – in response both to new information and to social influences.

Aside from the re-engineering costs, there are also time lags associated with changing the formulations of food supplies by Farmers, Food Companies, and Retailers.

Farmers, Food Companies, and Retailers must choose which types of food to supply, based on their expectations of the quantity and longevity of demand for different food types by Consumers.

This analysis examines these different dynamics in the Food Technology Game.

Trends in Productivity of Food Supply

Before getting to the Game, let’s take a quick look at food production technologies and changes in the productivity of the food supply.

Figures 1A and 1B provide a list of food production technologies and productivities from the 1790s through 1997. I’ve highlighted in yellow when some of the major technologies were invented. 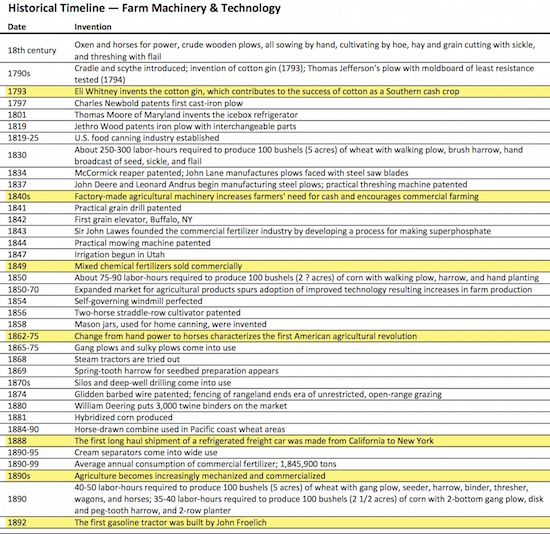 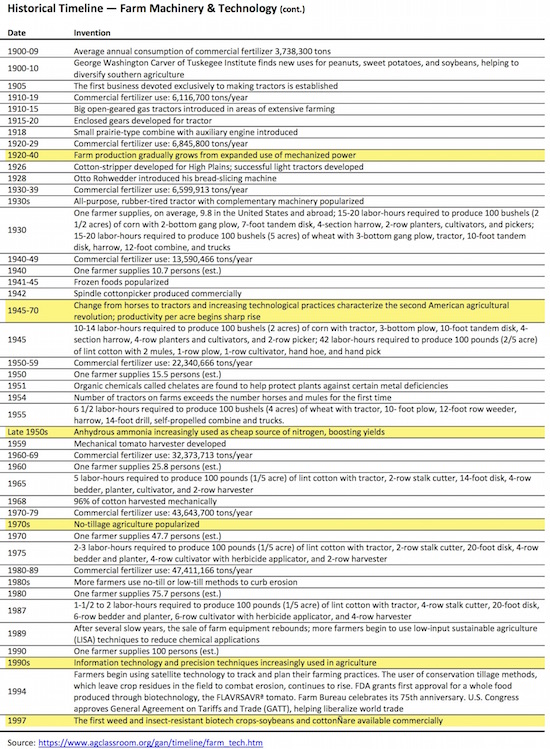 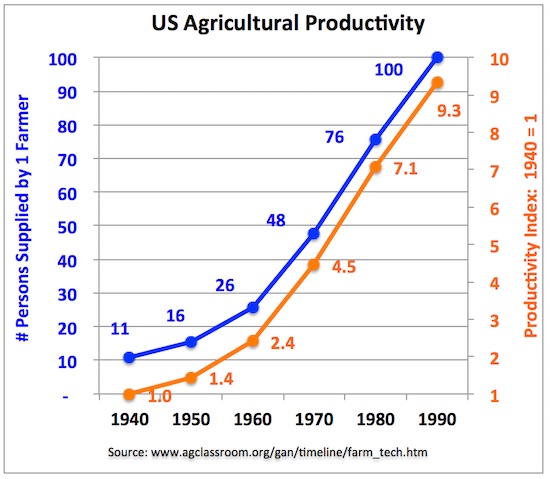 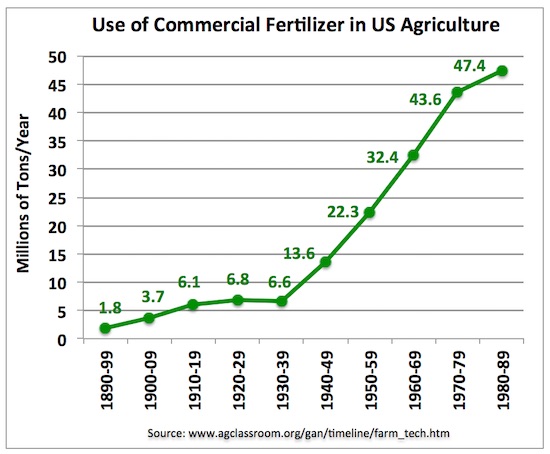 I initially thought that the invention of certain key types of agricultural machinery – the plow and the tractor, for example – would have been crucial for increasing agricultural productivity. However, generally speaking, machinery decreases the costs of generating output over a given piece of land. Fertilizer, however, increases the output produced per acre of land. So while machinery increases productivity linearly, fertilizer increases production exponentially.

Players in the Food Technology Game 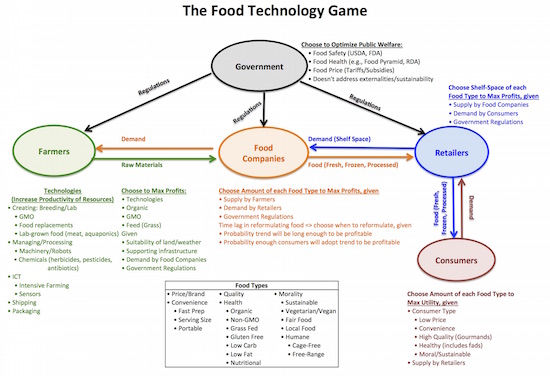 Choose each of following items to optimize public welfare:

Choose amounts of Food Types to maximize profits from sales of food to Retailers,

Choose the amount of shelf-space to allocate to each Food Company (Brand) and Food Type to maximize profits,

Each Consumer could be said to be a mixture of types, where each Consumer has a particular set of weights for each type.

Choose demand for each Food Type to maximize utility,

Given Food Types (See listing from Food Companies section above)

Externalities associated with the Production of Food Types

Externalities result in Farmers transferring costs generated by their own operations onto other Farmers and Consumers.

In particular, to the extent that

Government can minimize the impacts of externalities, either by properly enforcing the laws against pollution, by taxing pollution, and/or by subsidizing more sustainable methods.

An alternative to government intervention for forcing Food Suppliers to be more sustainable in their methods is for changes in Consumer demand to compel Food Suppliers to do so. As a case in point, starting in early 2015, Food Suppliers began announcing that they would switch from using traditionally produced eggs to using only cage-free eggs in their food products. (See, for example, Alexander C. Kaufman, “Nestlé Just Set The New Standard For Using Cage-Free Eggs.”) As more Food Suppliers announced that they too were switching, they began creating an increasingly large competitive disadvantage for the holdouts. We’ll see whether or not cage-free eggs eventually become the new norm.

Such social movements are often compelled by newly generated information, regarding either

Social influences on demand are types of direct network effects, where Consumer demand either increases or decreases as more Consumers consume the goods.

A psychological phenomenon whereby people do something primarily because other people are doing it, regardless of their own beliefs, which they may ignore or override. The bandwagon effect has wide implications, but is commonly seen in politics and consumer behavior.

The bandwagon effect is clearly seen in food fads. Food fads lead to

[T]he desire to own something that is very expensive or rare, for the supposed status one would gain by owning it.

The existence of time lags associated with the reformulation of food means that Farmers and Food Companies choose when to reformulate Food Types and Food Retailers will change their allocations of shelf-space when doing so becomes profitable, given

Gaming the Supply of Food Types

Higher quality foods and foods that are healthier or more moral/sustainable tend to command higher prices than their lower quality counterparts, either because Consumers seeking these types of foods are willing to pay higher prices for them, and/or because they are more costly to produce. As such, Farmers and Food Companies have an incentive to game the quality/morality of the food. That is, they have an incentive to actually provide lower quality food, while advertising it as being higher quality. In this way, they generate higher profits through higher prices without having to incur any of the associated costs.

For example, some Food Producers claim their products have been generated from organic or sustainable methods, when, in fact, they have not.

Another, less egregious, example of gaming the system is when Food Producers label their traditional products as conforming with the latest fad, for example, by labeling bottled water as being low-carb, low fat, or gluten free.

Some of the more interesting Food Technology trends are those that involve radical changes, either in the way food is generated or perceived. Two such trends are currently afoot: lab-grown foods and food replacements.

There are many different types of food being grown in labs or specialized greenhouses. These foods are specially engineered to require as few resources as possible, generate the least amount of waste as possible, and produce the most appealing (to the eye and taste) and nutritionally dense foods as possible.

What’s interesting is the dichotomy between two of the latest food movements:

It will be interesting to see how Consumers who advocate natural foods will react to lab-grown foods.

PlantLab is on a mission to change the way the world is fed. Through our revolutionary technology we can grow fruits and vegetables on a fraction of the land required for conventional farming. Not only do we greatly improve crop taste and nutritional value, we also eliminate the use of pesticides and drastically reduce the amount of water necessary. Given that our technology is geographically indiscriminate, we can almost eliminate the need for transportation and thus significantly curb pollution. Better food, better-fed people, and a healthier planet for our children and grandchildren.

Aquaponics refers to any system that combines conventional aquaculture (raising aquatic animals such as snails, fish, crayfish or prawns in tanks) with hydroponics (cultivating plants in water) in a symbiotic environment. In normal aquaculture, excretions from the animals being raised can accumulate in the water, increasing toxicity. In an aquaponic system, water from an aquaculture system is fed to a hydroponic system where the by-products are broken down by nitrification bacteria into nitrates and nitrites, which are utilized by the plants as nutrients, and the water is then recirculated back to the aquaculture system.

From Jacob Bunge, “Sizzling Steaks May Soon Be Lab-Grown”

Several startups are racing to be the first to fill U.S. consumers’ plates with laboratory-developed hamburgers and sausages that taste just as good as the kind from cattle and pigs.

The startups’ lofty goal is to remake modern animal agriculture, which the United Nations estimates consumes one-third of the world’s grains, with about a quarter of all land used for grazing. The companies say that growing meat with cells and bioreactors—similar to fermentors used to brew beer—consumes a fraction of the nutrients, creates far less waste and avoids the need for antibiotics and additives commonly used in meat production.

Another trend that is continuing on is in the way food is conceptualized by Consumers. Most people view food and the activity of eating as a combination of sources of (i) pleasure, (ii) social activities, and (iii) nutrition. While different Consumers place different weights on each of these characteristics at different times, I would hazard to say that most Consumers most often view the consumption of food as a source of pleasure.

However, there do exist plenty of Consumers who at one time or another would prefer to simply ingest a food replacement that has been engineered to be as nutritionally dense and easy to consume as possible. This is the market that food (meal) replacement companies target.

Clearly, food replacements are nothing new. Companies have been selling food replacements for decades, by those seeking to lose weight (e.g., Slim-Fast), pack on muscle (e.g., high protein meal replacements), or simply have a quick, nutritious meal.

It is for the purpose of techies who are seeking a quick, nutritious meal that several new technology companies are providing meal replacements. As Brian X. Chen, in “In Busy Silicon Valley, Protein Powder Is in Demand,” explains it,

Boom times in Silicon Valley call for hard work, and hard work — at least in technology land — means that coders, engineers and venture capitalists are turning to liquid meals with names like Schmoylent, Soylent, Schmilk and People Chow. The protein-packed products that come in powder form are inexpensive and quick and easy to make — just shake with water, or in the case of Schmilk, milk. While athletes and dieters have been drinking their dinner for years, Silicon Valley’s workers are now increasingly chugging their meals, too, so they can more quickly get back to their computer work.

In particular, Soylent describes its mission as follows.

Soylent™ was developed from a need for a simpler food source. Creator Robert Rhinehart and team developed Soylent after recognizing the disproportionate amount of time and money they spent creating nutritionally complete meals.

Soylent is a food product (classified as a food, not a supplement, by the FDA) designed for use as a staple meal by all adults. Each serving of Soylent provides maximum nutrition with minimum effort.

My guess is that, given the pleasure that so many people get from consuming “real” food, meal replacements will remain a niche market for the foreseeable future.