Being Healthy Shouldn’t Be This Hard

In 2018, Americans spent $3.67 Trillion on healthcare, amounting to 19.5% of GDP, up from 5.2% of GDP in 1960. It might not be such a bitter pill if Americans were becoming correspondingly healthier over time. But we’re not. Everyone knows that despite our hefty increases in spending over the decades, we’ve also become heftier ourselves, causing our health to deteriorate.

Essentially, we’re not eating right nor getting enough exercise, which has led us to become fat. And it’s not just the disadvantaged classes who have weight problems. Laziness and bad eating habits pervade society, from the rich (about 1/3 are obese) to the poor (almost half are obese). In fact, our bad habits (poor diet, inactivity, and smoking) contribute to 8 of the 10 top causes of death (2/3 of all deaths) in the US (see Figure 1). 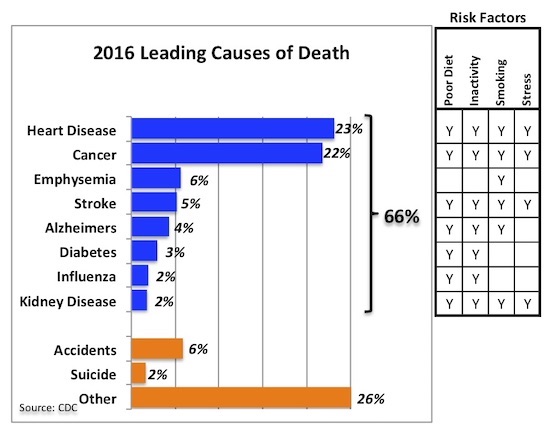 What’s so tough about being healthy that so many of us have so much trouble with it?

Since the post-WWII era, changes in technology and society have made it harder in many respects for us to maintain healthy lifestyles (more detailed information on post-WWII changes leading to unhealthy lifestyles can be found in a previous blogpost “Why Are Healthcare Costs So High?”). The follow issues have all contributed to the problem.

Relentless Messaging and Hectic Lifestyles Have Pushed Us Over the Edge

I believe labor-saving technologies and shifts toward more sedentary lifestyles have certainly contributed our health problems. And greater availability of cheap, processed foods has further exacerbated the situation. However, I believe that what has truly tipped the scales against our efforts to be healthy are two other changes in society: Relentless messaging to eat, while being simultaneously sapped of the willpower needed to resist those constant temptations.

We’ve been challenged by many other difficult tasks in our lives, such as learning to read or write, drive a car, or use a computer. Yet, there’s an important difference between these types of efforts and the effort needed to live a healthy life: the duration of effort needed to succeed. Specifically, learning to read and write takes a lot of effort in the beginning. However, once we learn how to do these things, they quickly become habitual — something we can do on autopilot, without requiring any conscious effort. Being healthy, on the other hand, requires constant, conscious effort and willpower, in the face of relentless temptation to stray. Unfortunately, our willpower is too often sapped due to overload by stress and other mental and emotional activities in our daily lives. If we were not otherwise being deprived of this energy, we would be better able to resist unhealthy temptations.

Two separate issues here need to be unpacked: (i) We are faced with relentless messaging to eat, which means we need conscious effort and willpower to stay the course of healthy living. Yet, (ii) our willpower has been drained by increasingly hectic and stressful lifestyles.

We Are Faced with Relentless Messaging to Eat

Food providers have mastered the art of making food widely available, easy to buy, and convenient to eat. Wherever we go, we are tempted with food, from grocery stores, restaurants, and gas stations; to electronics, office supply, and clothing stores; to work lunchrooms and recreation centers. Food is everywhere.

Even if food isn’t physically present, thanks to technology, food suppliers are continually finding new ways to bombard us with advertisements for food. Traditional sites we see food advertised include: Newspapers, magazines, and mail; TV, movies, and radio; buildings and billboards; buses and bus stops; and athletic clothing, equipment, and arenas. Of course, now that we’ve become attached to our phone screens, we’re constantly being flooded with ads on all the ad-supported sites we visit. All this doesn’t even include some of the more novel locations suppliers are finding to hit us with ads, such as on tattoos or in the middle of the street.

Changes in social norms, perhaps even more insidious than constant ad assaults, have also led us to increase our food intake. For example, portion sizes have increased: today’s portions are more than twice the size of portions served in the 1970s. When more food is placed is front us, we generally eat more, so larger portion are contributing to our weight problem. Also, we’re eating out more often than we used to, and we tend to eat more food in general — and more unhealthy food in particular — when we eat in restaurants.

Furthermore, it has become common for us to eat throughout the day, even while we’re doing other things, from surfing or working on our computers, to driving in our cars, to walking down the street. I have a cousin who lives in Switzerland. Years ago, when he was in the US for a visit, he remarked, “When did Americans become so thirsty?!? Everyone is drinking something as they walk down the road. If they’re thirsty, why don’t they have a glass of water before they leave?”

And as final example, as mentioned earlier, as our weight has increased, it has become more socially acceptable to be heavy. There’s less of stigma associated with being overweight, and accommodations have become more widely available for heavier people.

Our environment is increasingly characterized by cheap and easy access to food, relentless advertisements for food, and changes in social norms, all of which provide constant cues for us to eat. Given the relentless pressure, it requires increasing amounts of conscious effort and willpower to not overeat.

Our Willpower Has Been Sapped by Increasingly Hectic and Stressful Lifestyles

Our current, chaotic and stress-filled lives have been draining all our mental energy, leaving none left to resist other temptations, including the relentless invitation to eat. In The Science of Willpower, Lia Steakley at Stanford Medicine describes how stress makes it “harder to find our willpower”:

The biology of stress and the biology of willpower are simply incompatible. So any time we’re under chronic stress it’s harder to find our willpower. The fight-or-flight response floods the body with energy to act instinctively and steals it from the areas of the brain needed for wise decision-making. Stress also encourages you to focus on immediate, short-term goals and outcomes, but self-control requires keeping the big picture in mind. Learning how to better manage your stress …is one of the most important things you can do to improve your willpower.

Lia Steakley describes factors in our lives other than stress that are also draining our stores of willpower. For example, both sleep deprivation and bad nutrition impair our brain’s ability to use energy efficiently.

Furthermore, our need to do so many things at once – our constant multitasking – is also depleting our mental energy, leaving too little left to resist temptation. Behavioral Neuroscientist, Daniel Levitin says that when we multitask, we’re actually quickly switching between tasks. He notes that continual mental switching taxes our energy, “making us feel tired much more quickly than if we sustain attention on one thing.”

Finally, the sheer relentlessness of food temptations and the need to continually resist those temptations in and of themselves exhaust our willpower. As the American Psychological Association puts it:

In  an environment where unhealthy (and mouthwatering) food choices are everywhere, resisting temptation is likely to deplete willpower, chipping away at the resolve of even highly motivated dieters.

The difficult nature of making changes means that you will likely be putting in effort that will take you far beyond the point at which it is inspiring or fun. This junction is what I call The Grind, which starts when actions necessary to produce meaningful change become stressful, tiring, and tedious. The Grind is also the point at which your efforts toward change really count. The Grind is what separates those who are able to change from those who are not. Many people who reach this point in the process of change either ease up or give up because change is just too darned hard. But truly motivated people reach The Grind and keep on going.

Second, the APA suggests using the “out of sight, out of mind” principle to help avoid temptation. Keeping food out of sight or less readily accessible goes a long way in increasing our ability to resist.

Next, the APA suggests using a technique called an “implementation intention.” As the APA describes it:

Usually these intentions take the form of “if-then” statements that help people plan for situations that are likely to foil their resolve. For example, someone who is watching their alcohol intake might say before a party, “If anyone offers me a drink, then I’ll ask for club soda with lime.” Research among adolescents and adults has found that implementation intentions improve self-control, even among people whose willpower has been depleted by laboratory tasks. Having a plan in place ahead of time may allow you to make decisions in the moment without having to draw on your willpower.

Finally, the APA suggests we start by focusing on one goal at a time, taken in small steps, to avoid depleting our willpower when trying to achieve our goals.