A Comparison of Private System and Public System Healthcare Dollars

Being a data junkie and always wanting to see the numbers for myself, I decided to look at actual trends in US healthcare expenditures to see where the dollars are actually going. I went to the US Health and Human Services website and downloaded annual expenditures on healthcare from 1960 through 2007.

The first thing I looked at was total annual expenditures from 1960 through 2007 (blue line). These data show an exponential increase in healthcare expenditures from 1960 through 2007. The data are reported in nominal dollars (that is, not adjusted for inflation), which will tend to cause a more dramatic looking trend. To put these numbers into real, 2007-dollar terms ($2007), I pulled in the CPI from the BLS and deflated annual expenditures by inflation (green line). What this does is to increase the weights of expenditures in the distant past relative to more recent expenditures; that is, the early part of the expenditure curve shifts up. So, the historical exponential increase in healthcare spending hasn’t been quite as bad as it initially looked. Finally, to account for the increasing size of the population over time (healthcare expenditures have been going up in part because there are more people using healthcare than there used to be), I adjusted the annual expenditures by the size of the population, to get annual per-capita spending on healthcare (black line). What this final data series says is that more money has been spent on each person in the system each year, on the order of 4.5% compounded annually between 1960 and 2007, and on the order of 3.9% between 2000 and 2007.. 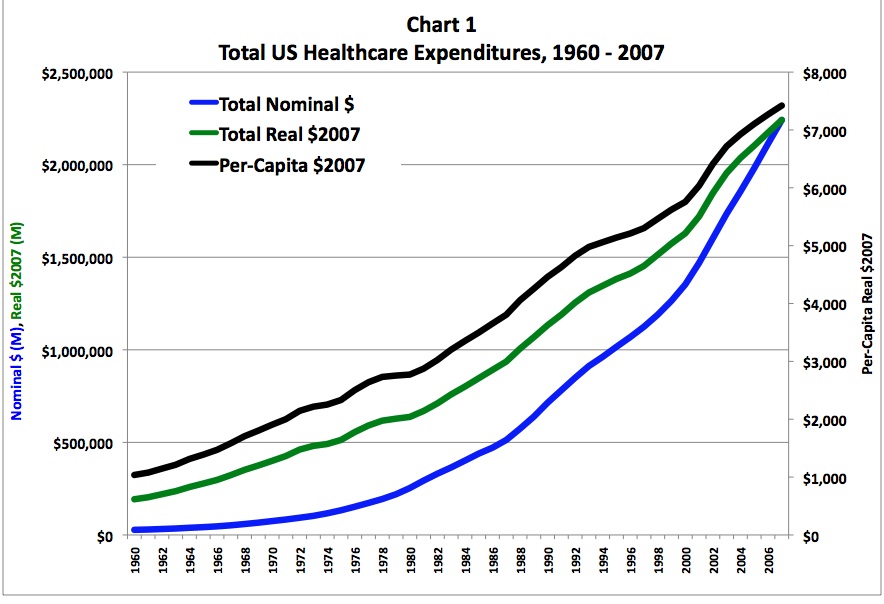 The next thing I looked at are trends in healthcare expenditures at the category level. What this more disaggregated picture tells us is that the same big categories of healthcare spending, hospital care, physicians/clinics, prescription drugs, administration costs, and nursing home care, have remained the big categories from 1960 through to the present. 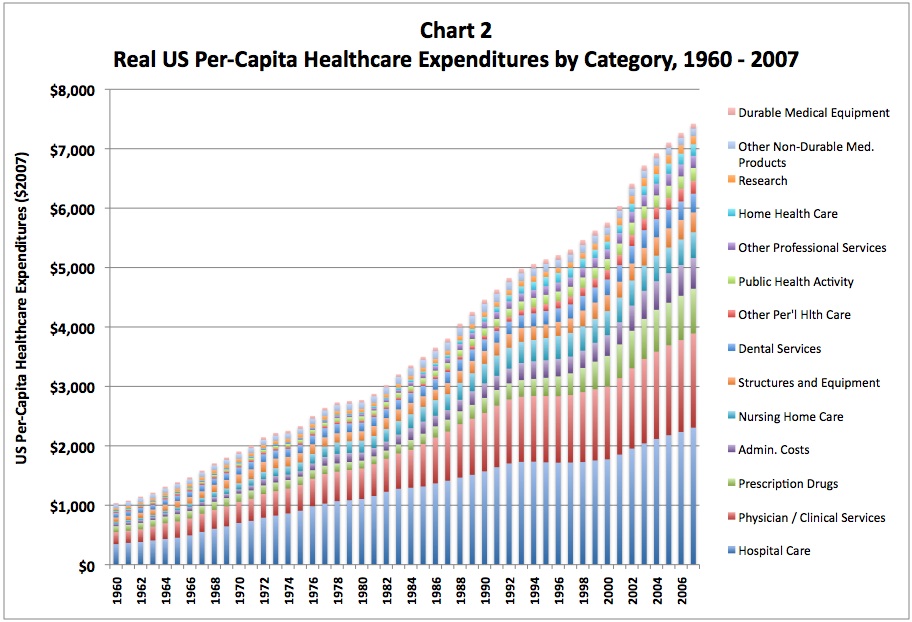 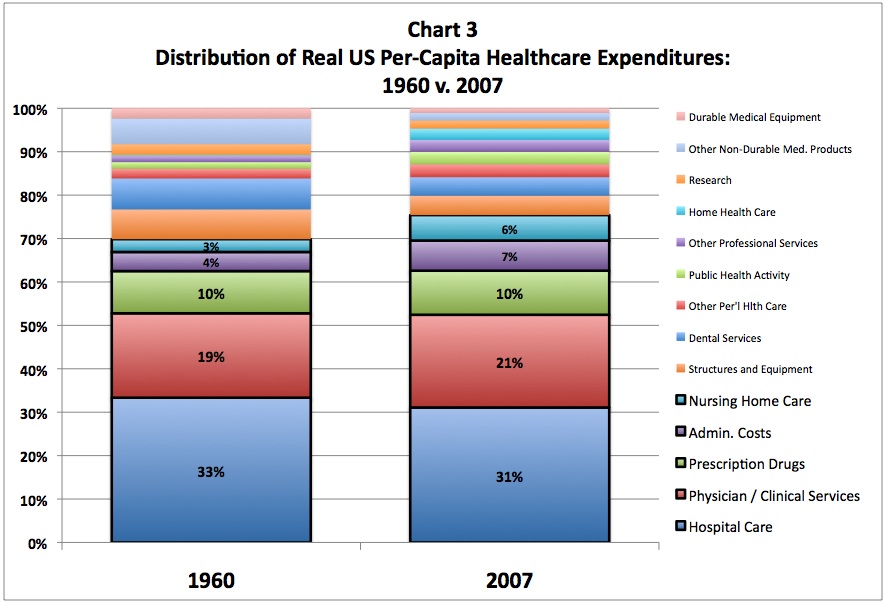 To get a big picture view of how the public vs. private burden for healthcare has changed over time, I compared the split for each of the five large categories of healthcare spending in 1960 to that in 2007. The comparison shows that for each of the top five categories, the public (government) share of expenditures increased significantly between 1960 and 2007. In other words, the government has been taking over a larger and larger portion of healthcare funding over time, starting at an aggregate level of 24% in 1960 and reaching 45% in 2007. 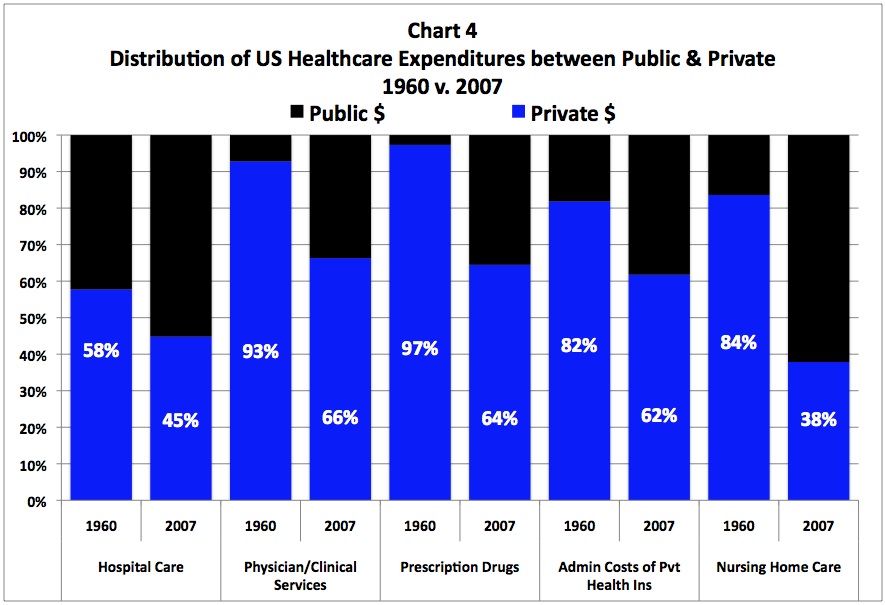 The next thing I did was to take a closer look at who’s paying for care and who’s receiving care in each of the five categories and see how these compositions have changed over time.

A few notes about the data:

By 2007 (see Chart 5C), private sources of funding had dropped from three-quarters to just over half of all funding for healthcare, whereas government funding had almost doubled, from just under a quarter to just under half. This is the same trend we saw in Chart 4. 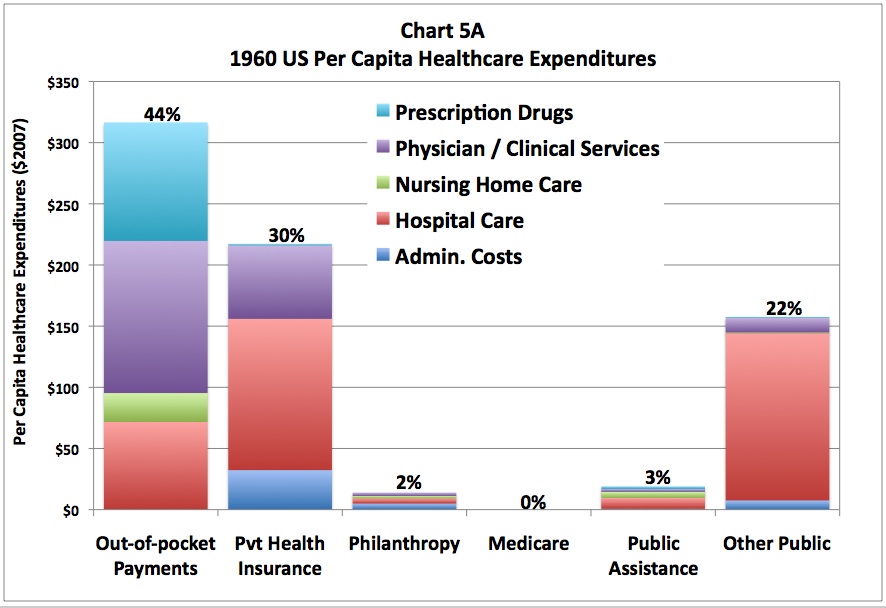 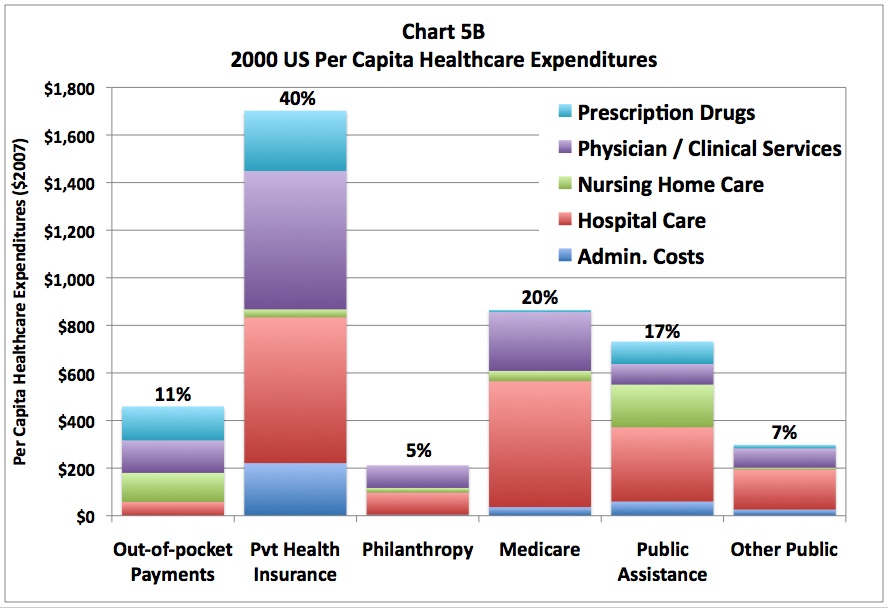 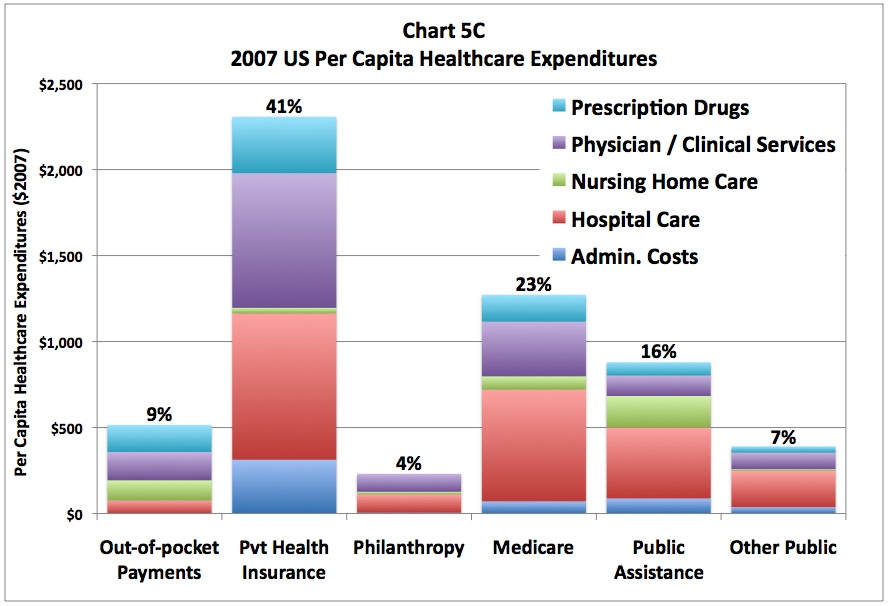 What I’m really concerned with is how the private payer system compares with the publicly funded system for “covered” patients. In this case, what I really need to look at are recent trends in private out-of-pocket plus insurance payments (Private Payments) versus Medicare payments. To this end I combined out-of-pocket and private insurance payments and compared them with Medicare payments by category for 2000 and 2007. 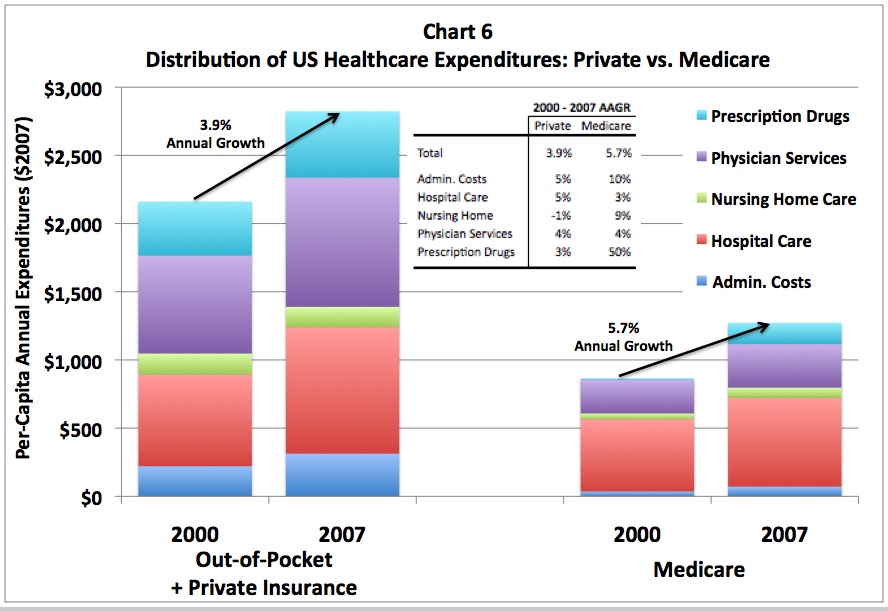 1. People in the US are spending more per person on healthcare each year, where the rate of increase is about 3.9% between 2000 and 2007.

Expenditures on healthcare are growing faster than GNP, which means people are spending more and more of their income on healthcare. While certainly a portion of the healthcare spending is waste, it cannot be disputed that improvements in medical information and technology have increased the quality of healthcare available to people over time. In a free-market society, it is perfectly natural for people to spend more of their income to enjoy better health.

2. Government has been funding a larger portion of healthcare in the US over time, starting at an aggregate level of 24% in 1960 and reaching 45% in 2007.

Given the fact that the US population is aging, and more specifically that the Baby Boomers are on the verge of retirement, the portion of the population covered by Medicare will increase over the next few years. So the trend toward increasing government funding of healthcare will continue even with no further legislation.

What I do not know is if the lower per-capita expenditures for Medicare patients relative to private system patients are entirely due to lower payments for the same services, or if they are also due to the use of fewer services.

In the latter case, if Medicare payments are lower than private system payemnts because Medicare patients receive fewer services, which we know isn't true because older people need more healthcare services than younger people do, then the implication is that the government rations healthcare for publicly funded patients.