A recent article in the NYT, “E-Records Get a Big Endorsement” by Steve Lohr, describes how hospitals are seeking a competitive edge” by offering subsidies to doctors to join the hospitals’ digital networks:

[I]n addition to federal support for computerizing patient records … [m]any [hospitals] are reaching out to their affiliated physicians — doctors with admitting privileges, though not employed by the hospital — offering technical help and some financial assistance to move from paper to electronic health records…

But hospitals are seeking a competitive edge, too. Digital links, analysts say, can also tighten the bonds between doctors and the hospital groups that subsidize the computerized records. In most local markets, independent physicians typically have admitting privileges at more than one nearby hospital, and so hospitals compete for doctors as well as patients…

In other words, the government-backed campaign to hasten the adoption of electronic health records has the potential not only to change how health care is delivered. It could also influence which institutions emerge as leaders in delivering care, as some local markets consolidate further…

The subsidy will be 50 percent of the total cost for physicians who simply install electronic health records that can communicate between the doctor’s office, labs and hospitals. But the subsidy will rise to 85 percent of the total costs of digital records for physicians who agree to share data — stripped of personal identifiers — on patient measures that include glucose levels for people with diabetes and post-operative procedures and prescriptions for heart patients. That could help … [hospitals] amass an ever-growing database of evidence indicating which treatments and procedures yield the best medical results…

Clearly, electronic medical records, insurance forms, and other inter-party communications will decrease the costs of healthcare administration, and they will decrease a significant portion of the medical errors that occur from miscommunications.

There are many interactions associated with the provision of healthcare: communications occur between doctors, patients, nurses, pharmacists, technicians, and so on. 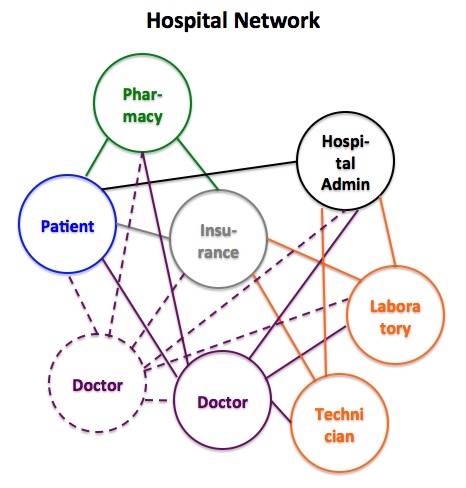 The healthcare system has been slow to adopt digitalized medical records because of the economics of doing so. It is expensive for a doctor to digitalize his medical practice. Yet, in order for him to benefit from doing so, a large portion of the other players he communicates with must also have digitalized their systems; otherwise the communication reverts back to the traditional, fragmented, scribbled record system. So until many other players have also upgraded their systems, individual early adopters will not receive much benefit from upgrading themselves. That is, it’s a chicken-and-egg problem: no one player will adopt until many of the other players adopt. Many will follow, but no one will lead.

The Government is subsidizing the digitalization of medical records to help get the ball rolling. By decreasing the costs to early adopters, the government is helping to make the adoption of electronic records cost effective for early adopters. Unfortunately, the government subsidies alone may not be enough. This will be the case, if, for example, the costs of digitalization net of the government subsidies still require a small (nonzero) portion of the other members of a physician’s network to adopt before the physician generates enough cost savings to make adoption worthwhile.

Think of it this way. The US healthcare system may be consider one massive network, in which all patients, physicians, pharmacies, labs, hospitals, insurance companies, and so on may potentially interact with one another. The Government makes subsidies for the adoption of electronic medical records available to all doctors in the US healthcare system.

This is where the hospital subsidies discussed in the article come in. By offering subsidies to doctors in their own local networks for adopting electronic medical records, hospitals are encouraging precisely those players who interact with one another the most to jointly upgrade to the new technology.

So what we have is that in a broad network system it’s not enough to offer general subsidies to network players to adopt a new technology. What is needed is to offer groups of players who actively transact with one another subsidies to jointly upgrade to the new system. In this way, network members will receive large enough benefits to make adoption worthwhile.

Note also that the while the hospitals must incur the costs of the subsidies, they will more than make up these costs by the benefits they will generate from having active members of their healthcare community plugged into their technology network. In other words, it’s not just the doctors who realize benefits by plugging into the hospital technology system. Rather, the hospitals themselves also benefit from having the doctors plugged in. That is, the benefits accrue in both directions.

By interlinking local healthcare communities through the adoption of digital medical records, hospital systems can establish a competitive advantage over other healthcare systems in several ways.

Second, if digital medical records are not compatible across healthcare systems, then hospitals can lock-in doctors and patients who join their system, by making it too costly to deal with members of other systems.

And third, being able to analyze the now easily available healthcare information, hospitals systems can help establish treatment guidelines for helping doctors in their care of patients. Such guidelines will increase the effectiveness and decrease the costs of medical treatment, thereby further enhancing the competitive position of the healthcare system.