A recent article in the NYT, “Fossil Fuels’ Hidden Cost Is in Billions, Study Says” by Matthew L. Wald, described a study that Congress ordered to be conducted “to measure the costs not incorporated into the price of a kilowatt-hour or a gallon of gasoline or diesel fuel.” The study ended up measuring only those costs associated with “excess mortality — increased human deaths as a result of criteria air pollutants emitted by power plants and vehicles.” The study concluded that [emphasis is mine]

Nearly 20,000 people die prematurely each year from such causes, according to the study’s authors, who valued each life at $6 million based on the dollar in 2000.

The idea of putting a value on human life is nothing new. According to Wikipedia:

The value of life (or price of life) is an economic value assigned to life in general, or to specific living organisms. In social and political sciences, it is the marginal cost of death prevention in a certain class of circumstances. As such, it is a statistical term, the cost of reducing the (average) number of deaths by one. It is an important issue in a wide range of disciplines including economics, health care, adoption, political economy, insurance, worker safety, environmental impact assessment, and globalization. 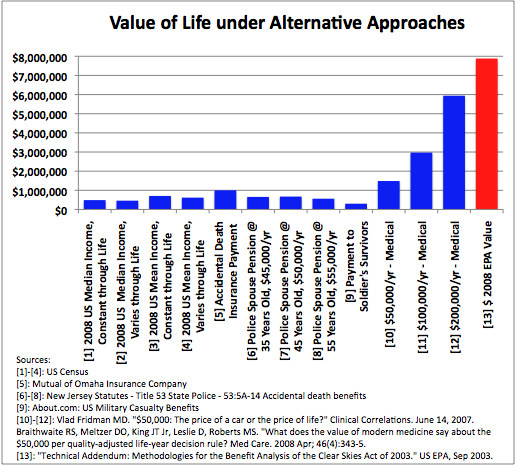 Methodologies for Estimating the Value of Life

How is the value of a human life calculated? There are several different ways of calculating the value of a life, based on market approaches, legal approaches, compensation for accidental death, and methods used by the government for medical and environmental policy purposes.

Estimates of the value of a life under alternative approaches are summarized in the following table, with details on how the estimates were derived described in the sections below. 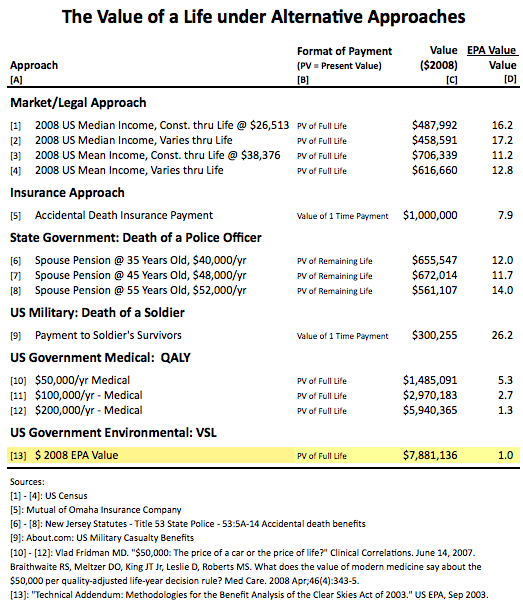 Clearly, the Cost Approach and the Market Approach are not relevant here. However, we could consider the Income Approach and assign a value to a person based in the present value of his future income. So what does the average American make? Here are the data from the US Census.

What the data show are that there are big differences in income depending on your age group, that is, people have different incomes at different stages in life. The data also show that the mean values are larger than the median values, which means that income is skewed, that is, there are some people in every age group with much larger incomes than the rest of their cohort. Taken together, these data suggest that the value of a life, or, more accurately, the value of the loss of a life, using the income approach will depend on (1) how old the person is and (2) how much income he has.

I couldn’t find a legal description of compensation for loss of life, but I did find the following that describes legal compensation in cases of personal injury:

In personal injury lawsuits, awards are designed to place the injured person in the position that he or she was in prior to the accident. However, because we cannot reverse time and prevent the accident from occurring, the only alternative for an injured person is an award of money damages. Although determining the amount of such damages is not an exact science, there are three main areas a jury evaluates before determining what they believe is an appropriate award:

* past and future medical bills;

* past and future lost wages; and

* past and future pain and suffering.

The typical advertisement for life insurance offers up to $1,000,000 in payment, less the cost of the insurance premiums.

…you can be protected with Accidental Death Insurance from Mutual of Omaha Insurance Company. Your loved ones can receive up to $1,000,000 in benefits upon your death -- payable regardless of any other insurance you may have and income tax free under current federal tax laws. Best of all, your premiums are easy on your checkbook with coverage starting at 83 cents a day.

The New Jersey State Police award the spouse of an officer killed in the line of duty an annual pension of 70% of the officer’s annual compensation until the spouse dies.

Upon the receipt of proper proofs of the death of a member on account of which an accidental death benefit is payable, there shall be paid to the surviving spouse a pension of 70% of final compensation or of adjusted final compensation, as appropriate, for the use of that spouse and children of the deceased, to continue for as long as the person qualifies as a "surviving spouse" for the purposes of this act.

5. Federal Government Approach: Death of a US Soldier

When a US soldier is killed in the line of duty, the soldier’s survivors are awarded lump-sum payments totaling $300,255 (see row [9] in summary table above), plus they are entitled to other benefits, e.g., for housing and medical care:

For those whose death is as a result of hostile actions and occurred in a designated combat operation or combat zone or while training for combat or performing hazardous duty, the payment is $100,000…

The SGLI [Servicemembers’ Group Life Insurance] payment is $200,000 unless the member elected a lesser amount or declined coverage in writing…

The Social Security Administration pays a lump sum death payment, up to $255, to the surviving spouse living with the member at the time of death…

In the course of previous debates about the cost-effectiveness of healthcare treatments, economist invented a system of measurement called the QALY, quality-adjusted life years:

… one QALY represents one year in perfect health. The benefit of this system is that it incorporates both the length of life and the quality in health care calculations. The QALY can range from 0 to 1: if a person has to live without an eye or without a leg, the QALY goes below 1, if a person only lives for ½ year after an intervention, the QALY is 0.5. If a person will live for 3 more years, but with “½” of a quality of life, the treatment is deemed as having 3*0.5=1.5 QALYs.

… In 2005, the National Institute for Health and Clinical Excellence (NICE) [in the United Kingdom] is believed to have set a threshold about £30,000 (around $55,500) per additional QALY as the cutoff for what treatment costs are acceptable. In the US, the process is a little different. The policy of the US Public Health Service Panel on cost-effectiveness is that any threshold should be recognized as a guide to health care spending decisions, not a determinant of such decisions.

However, in many health economics papers, this threshold value is listed as $50,000 (Ubel 2003; McGregor, 2003). This value represents the approximate cost of one year of dialysis treatment. Under Medicare rules, renal dialysis is a federal entitlement to all United States citizens, and is thus considered cost-effective by US standards. As such, any other treatment that costs $50,000 or less per QALY is considered cost-effective as well.

Recently, the $50,000 value has been questioned as being too low. In one recent study, Stanford economists reexamined the total costs of providing healthcare to dialysis patients and concluded, “Considering both inflation and new technologies in dialysis, they arrived at $129,000 as a more appropriate threshold for deciding coverage.” Another similar type of study also concluded that $50,000 is too low:

To estimate the value of a life under the QALY methodology, I used three alternative values for a QALY: $50,000, $100,000, and $200,000. For each of these three alternatives, I calculated a present value, assuming an individual lives 75 years and using a discount rate of 3%. The results are presented in rows [10] through [12] of the summary table above.

Kip Viscusi is an economist who has studied the value of human life issue at length using the wage-risk tradeoff approach. Viscusi describes this approach as follows:

The fatality risk-money tradeoff is known as the value of statistical life (VSL). In the case of the labor market, the VSL is the wage-fatality risk tradeoff revealed by workers’ decisions about how much extra pay they require to induce them to accept jobs that pose additional risk.

The transfer of an estimate of willingness-to-pay for risk reduction from the market context to the environmental policy context is appropriate when the populations have similar risk preferences, and the risk reduction magnitudes are comparable across both contexts. In this case, the benefit to an individual from a small risk reduction can be aggregated to a population-level estimate. For example, if the average person would be willing to pay $500 to reduce the probability of dying by 1 in 10,000, then a population of 10,000 individuals would be willing to pay $5 million to prevent one member of that population from dying prematurely. The $5 million figure is the VSL. Because it is not possible ex ante to identify the person whose life will be saved, this prevented mortality is considered a statistical life.

The $6 million value of a human life used in the fossil fuel mortality study is the value used by the US EPA (Environmental Protection Agency), and it is based on VSL studies [emphasis is mine].

The monetary benefit of reducing premature mortality risk was estimated using the “value of statistical lives saved” (VSL) approach, although the actual valuation is of small changes in mortality risk experienced by a large number of people. The VSL approach applies information from several published value-of-life studies, which themselves examine tradeoffs of monetary compensation for small additional mortality risks, to determine a reasonable benefit of preventing premature mortality. The mean value of avoiding one statistical death (i.e., the statistical incidence of a single death, equivalent to a product of a population risk times a population size that equals one) is estimated to be $6.1 million in 1999 dollars. This represents an intermediate value from a range of estimates that appear in the economics literature, and it is a value the EPA uses in rulemaking support analyses and in the Section 812 Reports to Congress. This estimate is the mean of a distribution fitted to the estimates from 26 value-of-life studies identified in the Section 812 reports as “applicable to policy analysis.”