A recent article in the NYT, “California Panel Considers Money From Climate Rules” by Jesse McKinley, describes different tactics for California’s implementation of a cap and trade system:

Offering an early glimpse of how California might manage a central element of its ambitious greenhouse-gas law, a state committee has recommended that residents receive cash or tax breaks resulting from auctions of emission allowances to industries and other polluters.

Under the proposal, described by the committee as a “household friendly” approach, Californians would receive 75 percent of the proceeds from emissions auctions, either in tax decreases or checks sent directly to residents…

In cap-and-trade systems, individual polluters are given allowances to pollute to a certain level, with the total number of permissible emissions slowly reduced year by year.

In some cases, the allowances have been offered to polluters without charge to soften the economic impact or to win the confidence of businesses, which will bear higher costs to reduce emissions and which can sell unused allowances. The cap-and-trade legislation passed by the United States House last summer had some free allowances, as does much of the legislation being considered in the Senate…

A couple of different proposals have been floating around for allocating rights-to-pollute, including:

In order to get a better idea of how cap and trade works and who ends up getting what under the various proposals, I came up with a simple example.

The average HH uses roughly 9,000 kWh per year in electricity (see column [D] in Figure 1). This means each of the utilities generates 3.6 million MWh per year for its residential customers (column [E] in Figure 1 = column [C] x column [D]).

So now we have the total emissions per year for each of the utilities associated with supplying residential customers with electricity (HH = households, M = million, MT = metric tons):

How do utilities go about reducing the amount of emissions associated with a given amount of power they generate?  (Of course, utilities can always buy power on the open market, instead of generating it themselves, and sell the purchased power to their customers.  However, purchasing power from other entities simply shifts the emissions burden to neighbors.)  To reduce emissions, fossil fuel plants (coal, gas, oil) can buy cleaner fuel (or clean their own); they can install scrubbers on their generators to filter out emissions; they can install carbon capture technology on their generators, capture the CO2, then store the captured CO2 under the ocean or underground; or they can install generators that produce power from cleaner sources (gas, solar, wind, nuclear, etc.).  However, expanding into new sources of resource generation also requires utilities to install infrastructure that will enable them to link the new generators into their transmission system.

are illustrated in Figure 2: 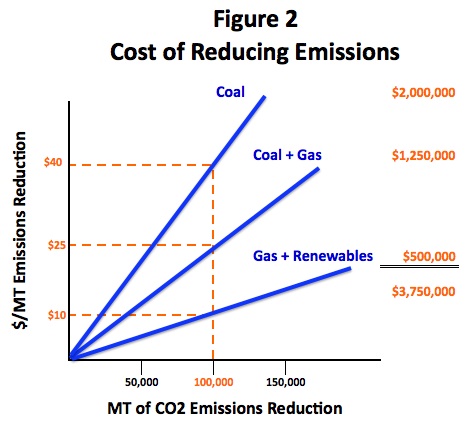 Now, instead of requiring each of the three utilities to reduce emissions by 100,000 MT, suppose that the requirement is that the 3 utilities combined must reduce their total emissions by 300,000 MT.  The costs for each of the utilities of reducing emissions by different amounts derived from Figure 2 above are displayed in Figure 3 below: 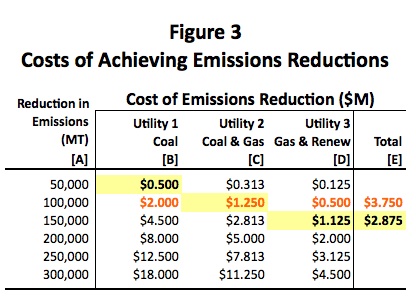 Alternatively, as seen in the numbers highlighted with a yellow background in Figure 3, we see that the 3 utilities combined could also achieve a total reduction of 300,000 units by having

This is how cap and trade works: total allowable emissions are capped (requiring a reduction of 300,000 MT in the example provided), and polluters trade the rights to pollute with each other.  As compared with the scenario in which each polluter is forced to reduce emissions by a certain amount (as seen in columns [E], [F], and [G] in Figure 4), cap and trade ends up with the polluters for whom reductions in pollution are most expensive continuing to pollute more, while buying rights to pollute from polluters who have reduced their own emissions more at lower costs.

Continuing on with the example, let’s say Utility 1 and Utility 3 settle on a price of $20 per ton for the 50,000 MT at issue.  In this case, the utilities total costs of supplying power to their residential customers would increase by (see columns [H], [I], and [J] in Figure 4):

In other words, total cost per HH of supplying electricity will increase more for the utilities for whom it is more expensive to reduce emissions; and these also tend to be the utilities that start out with largest amounts of emissions.  That is, Figure 4 shows that Utility 1 started out with the most emissions, 1.11 million metric tons, vs. 0.86 million metric tons for Utility 2 and 0.31 million metric tons for Utility 3 (column [D]), while Utility 1 also ended up reducing emissions the least, by 50,000 metric tons, vs. 100,000 ton reduction by Utility 2 and 150,000 tons reduction by Utility 3 (column [H]).

Continue on to Part 2.

Continue on to Part 3.