Has the Time for Electric Cars Finally Come?

A recent article in the NYT, “Sites to Refuel Electric Cars Gain a Big Dose of Funds” by Nelson D. Schwartz,described the latest development in the evolution of the market for electric cars:

Better Place, the closely watched start-up that hopes to create vast networks of charge spots to power electric cars, is set to receive a vote of confidence on Monday, in the form of $350 million in new venture capital.  Although Better Place will most likely require billions more in financing, this investment is an important step for the company...

“Better Place is a huge experiment in how you sell and fuel vehicles, and these investors are becoming convinced this will make money … It is a financial validation. Now we need to see technical validation and consumer validation.”

…Better Place and its backers will have to persuade consumers to move away from the internal-combustion engines that characterized motor vehicles for more than a century, while also winning the support of major automakers.

Under Better Place’s plan, consumers would buy electric vehicles made by the big automakers but get the batteries from Better Place and pay a fee according to the distance they drive. The blueprint calls for thousands of conventional charge points, as well as switching stations where a robotic device could replace a battery in less time than it takes to fill a tank of gas. These stations are needed because batteries have a range of only about 100 miles, or 160 kilometers, and recharging takes up to five hours. Changing batteries en route would make long journeys more convenient.

After reading the NYT article cited above and thinking about the recent emergence of electric cars, I decided to poke around a bit into the history of electric vehicles.  Much to my edification, I discovered that during the early development of the horseless carriage, between the late 1800s and early 1900s, there was a battle for dominance across three different types of engine technologies – steam engines, electric engines, and internal combustion engines – before the market eventually settled on the internal combustion engine:

By the turn of the century, America was prosperous and cars, now available in steam, electric, or gasoline versions, were becoming more popular. The years 1899 and 1900 were the high point of electric cars in America, as they outsold all other types of cars. Electric vehicles had many advantages over their competitors in the early 1900s. They did not have the vibration, smell, and noise associated with gasoline cars. Changing gears on gasoline cars was the most difficult part of driving, while electric vehicles did not require gear changes. While steam-powered cars also had no gear shifting, they suffered from long start-up times of up to 45 minutes on cold mornings. The steam cars had less range before needing water than an electric's range on a single charge. The only good roads of the period were in town, causing most travel to be local commuting, a perfect situation for electric vehicles, since their range was limited. The electric vehicle was the preferred choice of many because it did not require the manual effort to start, as with the hand crank on gasoline vehicles, and there was no wrestling with a gear shifter.

While basic electric cars cost under $1,000, most early electric vehicles were ornate, massive carriages designed for the upper class. They had fancy interiors, with expensive materials, and averaged $3,000 by 1910 [about $66,000 in $2009]. Electric vehicles enjoyed success into the 1920s with production peaking in 1912.

The decline of the electric vehicle was brought about by several major developments:

*  By the 1920s, America had a better system of roads that now connected cities, bringing with it the need for longer-range vehicles.

*  The discovery of Texas crude oil reduced the price of gasoline so that it was affordable to the average consumer.

*  The invention of the electric starter by Charles Kettering in 1912 eliminated the need for the hand crank.

*  The initiation of mass production of internal combustion engine vehicles by Henry Ford made these vehicles widely available and affordable in the $500 to $1,000 price range. By contrast, the price of the less efficiently produced electric vehicles continued to rise. In 1912, an electric roadster sold for $1,750, while a gasoline car sold for $650.

Interest in the development of electric vehicles reemerged again during the gas crises of the 1970s:

Electric vehicles had all but disappeared by 1935. The years following until the 1960s were dead years for electric vehicle development and for use as personal transportation.

The 1960s and 1970s saw a need for alternative fueled vehicles to reduce the problems of exhaust emissions from internal combustion engines and to reduce the dependency on imported foreign crude oil. Many attempts to produce practical electric vehicles occurred during the years from 1960 to the present.

WTRG Economics provides an informative graphical illustration of the history of oil prices: 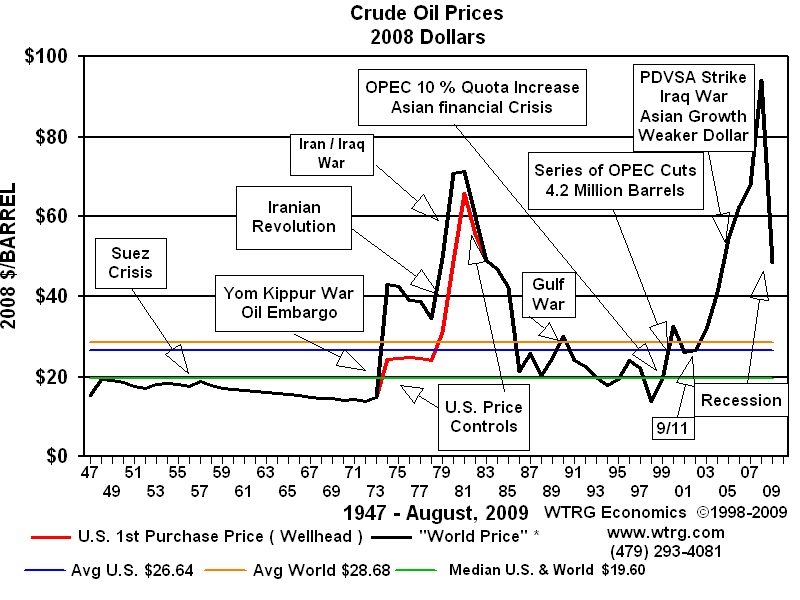 However, once the price of gas started to retreat once again during the early 1980s, so did interest in electric vehicles, due to their persistent inability to compete with traditional internal combustion powered vehicles.  Interest again reemerged during the 1990s, mostly from the impetus of clean air regulations.  “Primary among these is the U.S. 1990 Clean Air Act Amendment, the U.S. 1992 Energy Policy Act, and regulations issued by the California Air Resources Board (CARB).”  Now, after the continued on-again, off-again evolution of electric vehicle technology, and the currently expected permanence of both clean air regulations and higher gas prices, it looks like electric vehicles might finally become competitive enough in the years ahead on price and performance issues to be able to enter the market and coexist with internal combustion powered (and hybrid) vehicles.

Has the Time for Electric Cars Finally Come?

The market for electric cars provides an interesting hardware-software game, due to the very large amounts of capital required to develop both the hardware – the electric cars themselves – as well as the requisite “software” – the network of refueling/recharging stations. 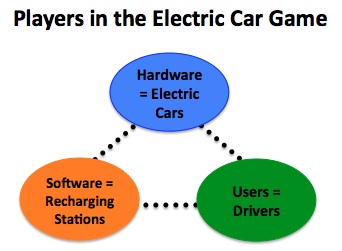 There is a ready supply of traditional (i.e., internal combustion) vehicles that provide the essential features required of an automobile –  speed, power and range – at affordable prices, together with the requisite ubiquitous availability of refueling stations.  As such, any proposed entrant into this market must be able to compete with the existing hardware and refueling/recharging infrastructure on features, price, and easy access.

Even in its more modern incarnation, development of electric vehicles has been progressing for fifty years.  Yet, never during this time have the developers come close enough to achieving a marketable product so as to warrant any real consideration of establishing the complementary refueling infrastructure.  The fact that investors are now convinced enough of the impending reality of electric cars to justify granting hundreds of millions of dollars toward development of recharging infrastructure provides huge validation that the time may actually have come.