A recent article in the NYT, "The Fight Over Who Sets Prices at the Online Mall" by Brad Stone, discusses that battle between manufacturers, who want retailers to abide by price floors, and retailers, who want the freedom to set prices as low as they please:

Wary of the Internet’s tendency to relentlessly drive down prices, major brands and manufacturers — and now, book publishers — are striking back, deploying a variety of tactics and tools to control how their products are presented and priced online…

In many cases that freedom stems from a 2007 Supreme Court ruling in the case of Leegin Creative Leather Products v. PSKS. The ruling gave manufacturers considerably more leeway to dictate retail prices … For offline retailers like Wal-Mart Stores and Best Buy, that means not dropping below those prices in the circulars and ads in newspapers. But online retailers have a greater burden. Manufacturers consider the product pages on sites like eBay and Amazon.com to be ads, and they complain whenever e-commerce sites set prices below the minimum price. This leads the sites to replace prices with notes that say things like “To see our price, add this item to your cart”… As a result, those prices also did not show up on search sites like Google Product Search and PriceGrabber.com. The trend has arguably weakened one of the implicit promises of e-commerce: that quick searches and visits to comparison shopping sites will yield the best deals.

Most online retailers complain that the missing prices confuse consumers and give an advantage to big chains like Wal-Mart, which do not bear the same burden in their stores… “We think consumers are best served when the retail marketplace is open and transparent and retailers have an opportunity to offer the best prices and services, and are not controlled from above by manufacturers” ...

Manufacturers, of course, have a different view. They say the competitiveness of the Internet has unlocked a race to the bottom — with everyone from large corporations to garage-based sellers ravenously discounting products, and even selling them at a loss, in an effort to capture market share and attention from search engines and comparison shopping sites. They also worry that their largest retail partners may be unwilling to match the online price cuts and could stop carrying their products altogether…

Instead of selling e-books wholesale to retailers like Amazon.com, the publishers want to sell them directly, setting prices and having the retailer act as an agent, taking a fixed 30 percent commission. 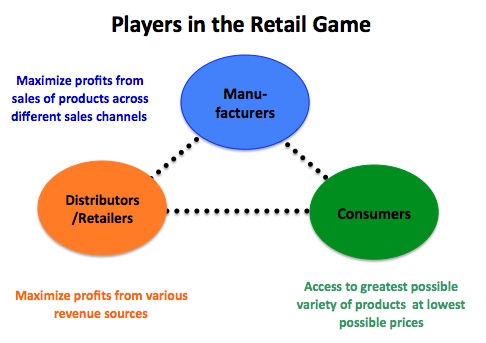 For example, take the case of pharmaceuticals.  Estimates of the average cost of bringing a new drug through the various FDA approval stages to market ranges between $802M and $1.7B.  And that doesn’t include the costs of all the money spent on R&D for drugs that never made it to the market.  In order for drug companies to remain viable in the long term, they must be able to charge high enough prices for their drugs that make it to market to cover (1) the variable costs of producing the drugs (perhaps a few cents each for cheaper drugs), (2) the fixed costs of bringing successful new drugs to market ($802M - $1.7B each), and (3) the costs spent on all the drugs that never made it to market (billions of dollars).

Most countries outside the US, especially those like Canada with nationalized healthcare systems, put price caps on the amount they will pay for pharmaceuticals.  If the price caps cover the variable costs of manufacturing the drugs plus a bit more, then manufacturers can recover some portion of their research costs by selling their drugs at the low, capped prices to users in those markets. However, they cannot cover all their costs of development at these prices, so they charge US patients higher prices to cover all the costs not recoverable from lower priced sales to Canada and Europe (and pretty much everywhere else outside the US).  In other words, drug companies can only afford to sell their drugs to the rest of the world at the low prices other countries are willing to pay, if drug users in the US pay the higher prices that cover the majority of successful and unsuccessful drug development costs.  If drug manufacturers cannot prevent US consumers from paying the same lower prices that consumers outside the US pay, they will no longer be able to afford to bring new drugs to market.

In yet other cases, the manufacturers want to establish minimum prices for all retail sales, so as to make sure retailers are compensated for special services they provide end users.  This is the idea behind retail price maintenance (RPM).  For example, consider car dealer showrooms.  It is expensive for car dealers to maintain showrooms to display the various automobile models they offer for sale and to train their salesmen in the ins and outs of each of the models so the salesmen can better educate consumers.  Yet most people, manufacturers, retailers, and consumers alike, would agree that dealer showrooms provide significant value to consumers and help them to choose the cars that’s best for them.  To encourage dealers to maintain showrooms for customers, automobile manufacturers will set minimum prices for their products to ensure dealers with showrooms can recover the costs of providing the special services.

Now suppose that the automobile manufacturers cannot ensure minimum prices.  In this case, what will happen is that people will go to the showrooms to see the cars in person and get the information they need from the educated dealers, then when they decide which car is best for them, they will go to eBay and buy the car there because the price on eBay is lower than the price charged by the dealer with the showroom.  In the end, the dealers with showrooms will be driven out of business by the dealers on eBay.  Consumers will end up paying low prices for their cars, but they won’t be able to go to showrooms to see the cars and get the information they need from informed salesmen.

Gray market activity involves products that are diverted from one channel and sold through others channels, to the “wrong” customer or for the “wrong” price.

Products obtained by retailers on the gray market enable them to charge lower prices and make sales they wouldn’t otherwise have been able to make, either to customers new to the market (i.e., customers who now decide to buy because of the very low price) or to customers cannibalized from other market sectors (segments).

The gray market products and loss leaders (and any other products sold at prices that are "too low" will to attract buyers to their stores (websites) that the retailers otherwise would not be able to attract with more "reasonable" prices. In turn, the higher volumes of customers enable retailers to generate

To be clear, the reason some retailers are able to charge very low prices and still stay in business is due to their ability to generate revenues from sources other than just sales to customers (such as sales from ads).  Without these additional revenue sources, these low-priced retailers would be forced to charge higher prices, or they would soon go out of business.

Consumers are interested in having the greatest possible variety of products offered at the lowest possible prices.

Outcome of the Retail Game 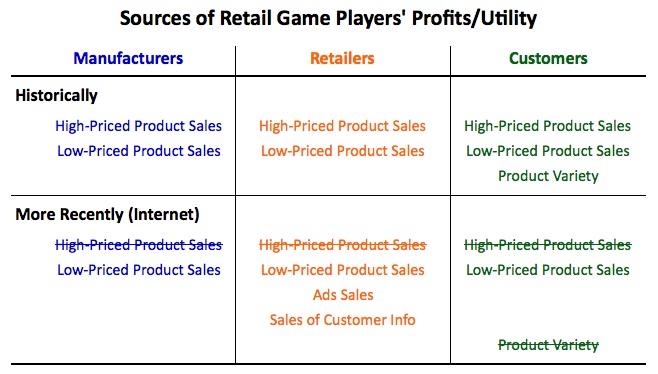 Historically, manufacturers have sold their products to some segments/channels at “high” prices and other segments at “low” prices.  Certainly there has always been channel diversion (gray market activity), but, historically, it has been small enough so as not to threaten the manufacturers’ business model.  While there have always been low-priced retailers, they have survived based on a model of generated high sales volumes at low margins.  Most retailers, however, have set their prices high enough to generate enough sales to make a decent profit.  Customers have enjoyed access to a variety of product offerings.  Product sales to customers who have been able and willing to pay higher prices have subsidized product sales at lower prices to customers who have been unable or unwilling to pay the higher prices.

More recently, with the advent of the Internet and the development of price comparison websites, it has been much more difficult for manufacturers to have their products sold at "high" prices to customers who have historically been able and willing to pay high prices.  This is due to several reasons, some legitimate, but others not.

Each of these three legitimate uses of the Internet have increasingly decreased the margins that retailers, and in turn manufacturers, can generate on sales of products.

Together, the legitimate and illegitimate sources putting downward pressure on retail prices has threatened the viability of many product manufacturers, in particular, those manufacturers of products (1) that consumers do not need to touch or feel before they buy and/or (2) do not have large transportation (shipment) costs.  If the manufacturers were to continue down the traditonal route, then the customers would gain in the short run by being able to pay lower prices than ever before.  Internet sellers would also gain in the short run from the ad revenues they generate from high volume customer traffic.  In the longer run, however, many manufacturers would not be able to continue to offer the same product quality and/or variety.  Consumers would this end up with low prices but fewer offerings.

Rather than continue on with the traditional retail model as a way for manufacturers to run their businesses, however, as the article indicates, more manufacturers are enforcing minimum prices and/or considering cutting out the retailers and, instead, offering direct-to-consumer sales.  Both these tactics ease the pricing pressures that lead to the race to the bottom.  Manufacturers who are able either to enforce minimum prices or change with the times may very well end up continuing to generate reasonable profits while also continuing to provide product quality and variety to consumers.