Historical Trends in Industry Funding for R&D and Patenting

In recent articles in both the NYT and the Harvard Business Review, Nathan Myhrvold, former CTO of Microsoft and current Founder of Intellectual Ventures (IV), defended his company against being labeled a “patent troll” and described the actual intent of IV:

What weʼre really trying to do is create a capital market for inventions akin to the venture capital market that supports start-ups and the private equity market that revitalizes inefficient companies. Our goal is to make applied research a profitable activity that attracts vastly more private investment than it does today so that the number of inventions generated soars…

I believe that invention is set to become the next software: a high-value asset that will serve as the foundation for new business models, liquid markets, and investment strategies…  like software, the business of invention would function better if it were separated from manufacturing and developed on its own by a strong capital market that funded and monetized inventions…

Before assessing Myhrvold’s intent as stated in the first paragraph above, it is important to understand the distinction between invention and innovation.  Invention is the creation of a new idea, which, in many cases, can be formalized into a patent.  Innovation is the commercialization (development and monetization) of an invention.  Wikipedia provides the following description: “Invention is the embodiment of something new. While both invention and innovation have ‘uniqueness’ implications, innovation also carries an undertone of profitability and market performance expectation.”

What Myhrvold envisions is the following, as illustrated in the diagram below:  Companies like Intellectual Ventures (patents funds) would attract funding from investors to be used to fund inventions from private inventors.  The resulting patents would be aggregated into portfolios owned and/or managed by the patent funds.  The funds would commercialize the patents, generally by licensing out portfolios of patents.  Due to their transaction cost efficiencies and risk diversification natures, the portfolios of patents will be more valuable than the sum of the values of the individual patents.  Returns on the funds associated with commercializing their patents would be divided between the owners of the patent funds (e.g., Intellectual Ventures) and their investors. 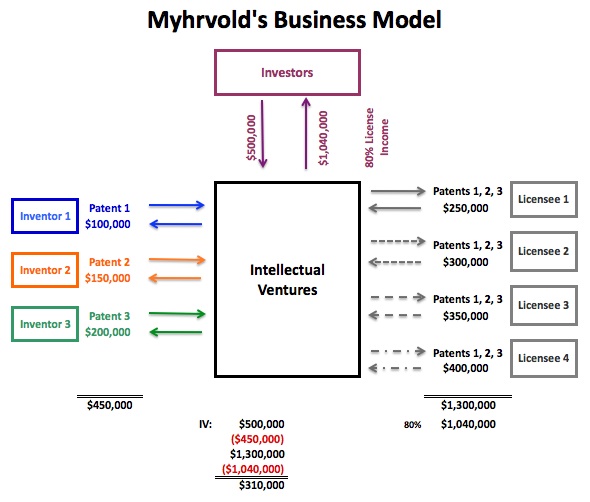 Historical Trends in Industry Funding for R&D and Patenting

Myrhvold’s intent is to increase the amount of funding available from private entities to increase the number of inventions applicable to private industry.  Data are available for the historical amounts of R&D provided from all sources (public and private) and used in all R&D venues in the US (industry, colleges and universities, research labs, etc.).  The portion of R&D corresponding to the segment Myrhvold is interested in is those funds provided by industry for industry R&D.  Note that R&D includes the funds used both for invention as well as innovation.  Ideally, we would like to see the industry funds devoted solely to research and the creation of patents, while excluding funding for the development of patents into marketable products.  However, the breakout of spending by each of these two subcategories is not available.

I’ve provided the R&D data series in the graph below, together with total US GDP and what I label as private GDP, which is the portion of US GDP that excludes government spending: 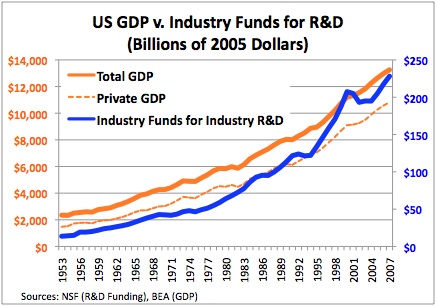 The next graph looks at historical trends in industry R&D as a percentage of US GDP and indicates that the portion of total funds available that are directed toward industry R&D has been increasing over time: 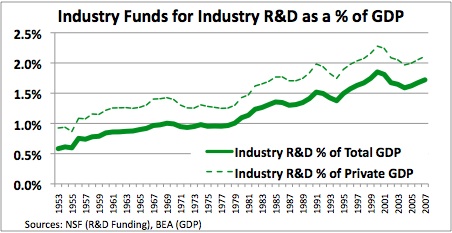 The next graph shows historical trends in the number of US patent applications per dollar of US industry R&D, abbreviated as patents per dollar, together with its inverse, dollars per patent. 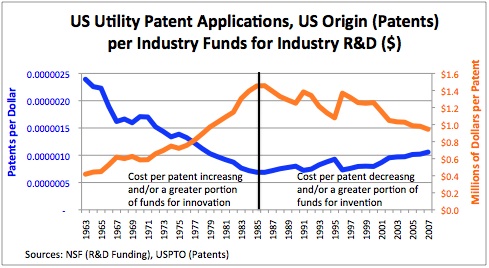 The data indicate that a dollar of R&D funds bought increasingly fewer patents between 1963 and 1985-1986, but then the trend reversed during 1985-1986.  What this means is that either

What actually happened during the period is probably some combination of the two.

Regardless of the facts that (1) total industry funds for R&D has been increasing over time, and (2) more recently (i.e., sine 1985-1986) either a larger portion of funding has been allocated toward generating patents, and/or the costs of generating patents have been decreasing, Myhrvold believes that too little funding has been made available for industry inventions, and he intends to increase the amounts of funding available for inventions through the creation of private capital markets.

Let’s consider the idea of funding the creation of patents.  This type of transaction system will only work if the amount the funders are willing to pay inventors to generate inventions is no less than the amount inventors are willing to accept to generate those inventions.  So, how much are funders willing to pay for the generation of patents, and how much are inventors willing to accept?  The answer lays in the expectations both funders and inventors have about the contribution of patents to the stream of profits they end up generating.  If both parties are in agreement about the portion of the final expected profits associated with a commercialized or licensed invention that is attributable to the underlying patent, then the model should work.

How might expectations between the parties differ?  I describe a couple of possible points of contention below.

First, in his HBR article, Myhrvold indicates that “Statistics on the true risk of investing in inventions are sketchy, but government reports suggest that just 1% to 3% of patents generate a profit for their inventors.”   Detached funders will discount the expected value of any given patent by 97 to 99 percent to account for the fact that only a small portion of patents end up being valuable.  However, inventors are much more inclined to believe that their patents fall into the 1 – 3% portion of profitable patents.  As such, inventors will be more inclined to discount the expected value of their patents by much less than will the funders.  In other words, inventors will be inclined to believe their patents are worth more than will funders of those patents.

Second, the value of patents is context specific.  Given its repository of patents and products, its know-how, its relationships, and such, IBM may be able to generate greater profits from a particular patent on a computer technology than, say, Cisco.  In this case, the patent at issue will be more valuable to IBM, that is, IBM will be willing to pay more for the patent, than Cisco.  A detached funder will be much more likely to understand this issue and discount the value of the patent to account for the fact that the patent might not end up with its ideal commercializer.  An inventor, on the other hand, will tend to focus more on the possibilities of his patent in its most valuable context, and thus value his patent more than the funders do.

Third, these days, most technologies are systems that combine patents and know-how from many different sources.  As a case in point, Steve Jobs has made a point of noting publically that the iPhone incorporates technologies from 200 patents (see for example this article). What can we then say about the portion of the iPhone’s value that is attributable to any one of those 200 patents?  It’s tough to say.  However, the inventor of one of those 200 patents will be more inclined to believe that his patent is the make-it-or-break-it piece of the system and thus value his patent more than would a disinterested funder.

Finally, in his HBR article, Myhrvold notes that patents are a lot more valuable when they are aggregated into portfolios:

Any one of the patents would have some value, but as a package the value is much more compelling, because customers save the time and expense of tracking down all the patent holders and negotiating separate deals. Customers can easily get all the patents they need to roll out an innovative product faster and at the same time reduce the risk that theyʼll miss a necessary license and get blindsided by an infringement suit.

Most of our large customers understand this approach and want to license our patents in bundles of 1,000 or more…That said, constructing such portfolios is far from easy. One of the biggest challenges we face is discerning which kinds of inventions are most valuable to our strategic investors and other customers. Companies are not used to talking about such needs with others. And sometimes they just havenʼt thought that far ahead.

When patents are aggregated into portfolios, it is the aggregators who realize the extra value created, not the inventors.  Suppose, for example, that a licensor would pay $10,000 for each of 1,000 patents licensed separately (for a total license fee of $10M), but he would pay $20M to license the portfolio of 1,000 patents.  The inventors of the individual patents will be inclined value their patent based on the $20M generated from the portfolio licensed as a whole, rather than the $10M generated from individual licenses.  As such, the inventors will be inclined to place higher values on their patents than do funders.

Given the large discrepancies between the value inventors are apt to place on their patents as compared to the value that the funders are likely to assess for any number of reasons, it would not be surprising if Myhrvold’s capital markets don’t attract as many inventors as the funders would like.