Who Is the Smart Grid Technology Leader?

One of the hot technology trends over the past many months has been development of the smart grid (SG).  Reading Smart Grid News and other industry, and even mainstream, publications reveals an enormous amount of coverage of smart grid (SG) developments, both technical and commercial. Most of the coverage seems to be focused in two areas, smart meters and the standards-setting process.

Of course there’s much interest in smart meters, since (1) they offer exciting new opportunities for consumer control over their energy usage and cost, and (2) they have become controversial to regulators and consumer groups.  The other focus area in SG coverage is the very complex but crucial technical standardization process, driven by the National Institute for Standards and Technology (NIST).

My colleague, Lloyd Nirenberg, Ph.D. of Rocket Science Capital Advisors, LLC and I were discussing the development of the smart grid. Our attention ended up focusing on competition. We think the SG competitive battles will play out under the constraints of another big issue that has been largely ignored: the intellectual property (IP) (i.e., patents) that is not provided for standardization, but rather, is held for competitive advantage.

In the standards setting context, the SG community has focused its attention on making standards-associated IP available under generally equal terms. But regarding IP that is independent of the standards issue, there is a real danger of vendors and utilities infringing on IP rights of firms holding that non-standards-related IP.

Our intuition that IP has been largely ignored in SG context was confirmed by some quick searches we recently performed on Smart Grid News. A search on “smart grid” yielded 1,135 articles. Further searching on “wireless” yielded 125 results. But searches on either "intellectual property" or “patent” yielded only 9 articles each.

With this IP deficiency in mind, we decided to examine the space of SG patents to learn (1) which companies have the biggest SG patent portfolios, and (2) which technologies have received the most SG patents. We compiled a database of SG patents. The goal was to extract only those patents that relate specifically to the SG -- we defined the SG as a communications and control overlay on the traditional energy generation and transmission system --  and to exclude patents associated with the traditional generation and transmission of energy.

We immediately ran into several complications, some of which we’ll describe and explain our work-arounds. The long and short of it is that you cannot get much from searching patent databases for “smart grid”…but with some good judgment, you can see the structure of IP in the SG value chain.

Before I get into our analysis, let me first provide a better understanding of exactly what the smart grid is.

What Is the Smart Grid?

The US Department of Energy (DoE) describes the smart grid as follows.

Grid 2030 vision calls for the construction of a 21st century electric system that connects everyone to abundant, affordable, clean, efficient, and reliable electric power anytime, anywhere. We can achieve this through a smart grid, which would integrate advanced functions into the nation's electric grid to enhance reliability, efficiency, and security, and would also contribute to the climate change strategic goal of reducing carbon emissions. These advancements will be achieved by modernizing the electric grid with information-age technologies, such as microprocessors, communications, advanced computing, and information technologies.

Electric grid stakeholders representing utilities, technology providers, researchers, policymakers, and consumers have worked together to define the functions of a smart grid. Through regional meetings convened under the Modern Grid Strategy project of the National Energy Technology Laboratory (NETL), these stakeholders have identified the following characteristics or performance features of a smart grid:

•  Accommodating all generation and storage options

Similar to the DoE’s segmentation of smart grid performance features into seven categories, the National Institute of Standards and Technology (NIST) has developed its NIST Framework and Roadmap for Smart Grid Interoperability Standards Release 1.0, in which it has partitioned the various smart grid technologies into eight categories:

Currently, utilities are focusing on developing AMI to implement residential demand response and to serve as the chief mechanism for implementing dynamic pricing. It consists of the communications hardware and software and associated system and data management software that creates a two-way network between advanced meters and utility business systems, enabling collection and distribution of information to customers and other parties, such as the competitive retail supplier or the utility itself. AMI provides customers real-time (or near real-time) pricing of electricity, and it can help utilities achieve necessary load reductions.

Focuses on maximizing performance of feeders, transformers, and other components of networked distribution systems and integrating with transmission systems and customer operations. As Smart Grid capabilities, such as AMI and demand response, are developed, and as large numbers of distributed energy resources and plug-in electric vehicles (PEVs) are deployed, the automation of distribution systems becomes increasingly more important to the efficient and reliable operation of the overall power system. The anticipated benefits of distribution grid management include increased reliability, reductions in peak loads, and improved capabilities for managing distributed sources of renewable energy.

Monitoring and display of power-system components and performance across interconnections and wide geographic areas in near real-time. The goals of situational awareness are to enable understanding and, ultimately, optimize management of power-network components, behavior, and performance, as well as to anticipate, prevent, or respond to problems before disruptions can arise.

Mechanisms and incentives for utilities, business and residential customers to cut energy use during times of peak demand or when power reliability is at risk.  Demand response is necessary for optimizing the balance of power supply and demand.

The Smart Grid domains and subdomains will use a variety of public and private communication networks, both wired and wireless. Given this variety of networking environments, the identification of performance metrics and core operational requirements of different applications, actors, and domains—in addition to the development, implementation, and maintenance of appropriate security and access controls—is critical to the Smart Grid.

Encompasses measures to ensure the confidentiality, integrity and availability of the electronic information communication systems and the control systems necessary for the management, operation, and protection of the Smart Grid’s energy, information technology, and telecommunications infrastructures.

Our analysis of the SG patents was focused on the first five NIST categories listed above.

To compile our final database of SG patents we had to deal with two difficulties in particular when searching the database of US patents that we must mention. First, we were able to conduct keyword searches on the WIPS patent database (a subscription-based, online patent search database) only of words, and not of phrases.  In other words, while we would have liked to extract only those patents with the phrase “smart grid”, we were forced to settle for extracting patents that contained both the words “smart” and “grid”.  As such, the original search generated many more irrelevant patents than we would have started with, if we had been able to search using phrases. There were many more detailed, logical problems associated with using keywords precisely, which we believe we have solved.

Secondly, in this SG case, the method of using keyword searches proved to be difficult, since the exact same terminology (keywords) is used to describe technologies related to

For example, “ground fault detection” may apply to both semiconductor design as well as transmission systems. “Fourier transform” may apply to phasor measurement units or modulation systems for chips.

As such, the original database we compiled using keywords associated with the SG also pulled in large numbers of patents from these other technology areas.  It thus turned out to be quite a chore to manually wade through the patents generated from the original keyword searches and try to isolate those that related specifically to the SG.

Ultimately, using a variety of key word phrases, we compiled a set of 23,000 US patent applications and grants, nominally all for SG applications. We read the summary page and first claim for each and winnowed this huge sample down to 2,880 patents that we verified as applying specifically to SG, of which 2,469 are company-owned. We do not claim, however, that every SG patent is contained in these 23,000 patents, but we do say most of the ones in the first five NIST categories described above are covered.

This work revealed there are strong leaders in SG technology, as judged by the size of their patent portfolios. The results are a bit surprising.

As of Jul-09, the SG IP in our database (2,469 company-owned patents covering 5 NIST categories) is spread among 697 companies, but a relatively few companies dominate (see Chart 1):

Despite the media focus on AMI, it is Situational Awareness that has the most SG patents by far (1,236), consistent with utility focus on the operational effectiveness of transmission and distribution. 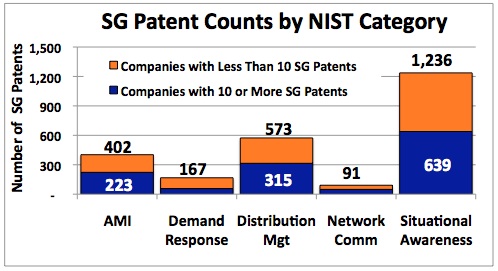 The dominant firms in SG IP are shown in Chart 3. ABB and GE are clearly the IP leaders. Generally, it is the vendors to the power utility firms that are the holders of the SG patents. We found only one utility (Tokyo Electric Power Co.) among the top 39 SG patent holders, as shown in Chart 2. This chart shows how

CHART 3: Which Firms Own the Most SG Patents?

It’s easy to conclude the Smart Grid patent space will continue to be dominated by the hardware and software vendors. But these same vendors will also use that IP to compete for leadership in sales to the utilities, who mainly want the benefits from Smart Grid developments without the costs of the associated research.