Inflation or Deflation? The Answer in a Nutshell

I don't normally write about macro issues.  However, there has been a tremendous amount of debate in the media over whether the US imminently faces inflation or deflation.  I've read a lot of articles on the subject and spent some time trying to puzzle out the issue for myself.  And then after being asked for my opinion on the issue by several friends and family members, I decided to write this blog entry.

In the run-up of the economy associated with the expanding real estate and financial assets bubble, inflation in the US markets started to really heat up.  Food and energy prices in particular started rising rapidly during 2007 and the first half of 2008 (as illustrated in Chart 1). 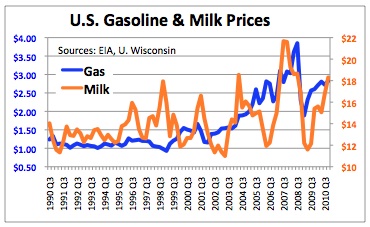 Then the bubble collapsed during the summer of 2008, and the economy sank into a deep recession, from which it’s been trying to recover since then.  With the collapse of the real estate and financial assets bubble in 2008, real estate prices have collapsed, financial institutions have been deleveraging (trying to get rid of their debt), and prices have generally dropped.

During the run-up, the rapidly increasing prices fueled much discussion of inflation (rising prices).  However, during the months after the collapse, all talk switched to that of deflation (falling prices).  Yet, as the government started pumping money into the economy (the stimulus programs QE1 and QE2), talk of inflation started popping up again.  Over the past several months, there has been much argument over whether the economy will continue to experience deflation or revert to inflation.

It’s been hard enough for industry experts to discern the major issues, while normal people have been completely flummoxed.  So, are we going to have inflation or deflation?  The simple answer is: yes.

In discussions of whether the near future holds inflation or deflation and the amount of growth in US GNP, there are four issues that will help to answer most questions.

1.  The developing world is consuming an increasing portion of global resources.  Trends toward increasing globalization over the past thirty years or so have helped the developing world (BRIC – Brazil, Russia, India, China) begin to grow to such an extent that their economies have been increasingly impacting the global economy. 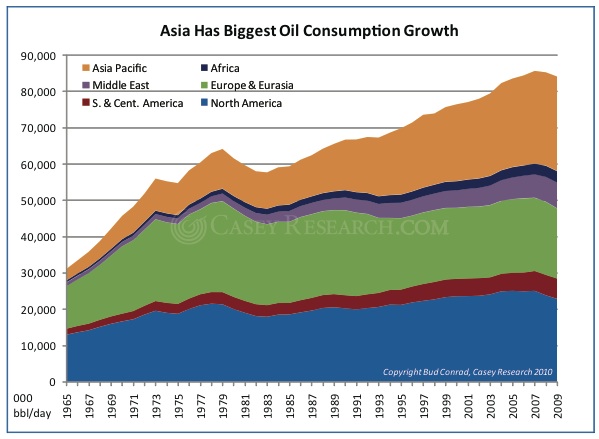 For example, Chart 2 shows how Asia Pacific’s share of the world’s total oil consumption has been increasing since the early 1980s. 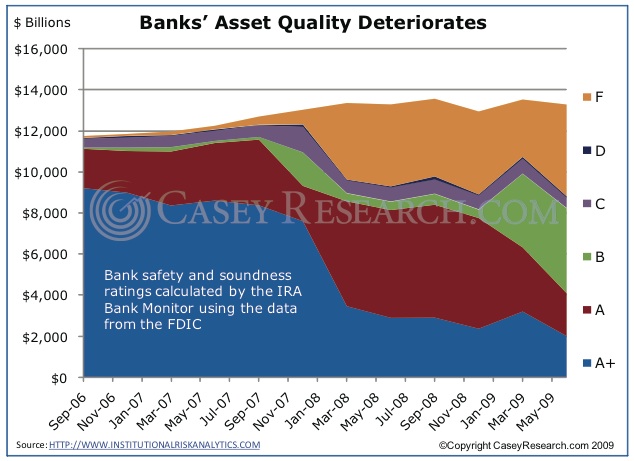 In order to lessen the pain experienced by consumers (home owners) facing mortgages and debt they can no longer afford, the government has continued to introduce regulations and stimulus money.  Such government intervention, though, has prevented the financial and real estate industries from cleaning out their toxic assets.  As long as banks continues to hold so much bad debt, the real estate industry (and other durable asset industries) will not be able to recover.   In other words, as long as the government continues to intervene in the financial markets, thereby deterring the cleansing of toxic assets from the system, real estate and other hard asset prices will continue to experience deflation. 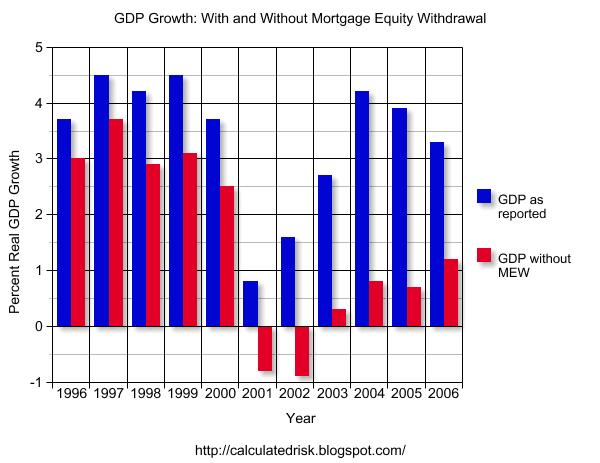 Chart 4 shows that without MEWs feeding consumer consumption, GDP growth rates would have been only about 1% per year during the early and mid 2000s, rather than the 4% the economy actually experienced.  Since the bubble has collapsed and many real estate financing schemes have been revealed as fraudulent, real estate prices have collapsed and will continue to wallow until the debt has been cleansed from the system.  In the meantime, the MEWs that fueled the high GDP growth during the recent past will not be available to fuel growth in the (near) future.  This means that the US economy will experience only low GDP growth rates into the near future.

4.  Its difficult to play the investment game when you don’t know what the rules are. As long as the government continues to propose massive new regulations (e.g., financial industry overhaul, cap and trade, Obamacare, industry bailouts, changing tax laws, etc.), investors will be hard-pressed to determine which investment projects will be worthwhile.  As such, many investors will delay investing in new projects and wait on the sidelines, until uncertainty associated with the government proposals has been resolved.