Which Students Should Community Colleges Cut?

What Are the Socially Optimal Alternatives for Community Colleges?

At the same time, the article questions the ability of community colleges to effectively transition students into four-year colleges:

"Unless two-year colleges substantially improve their success at getting their graduates into four-year colleges and universities, the end result will be a substantial decline in baccalaureate degree attainment rates in future years"…

In California, an admissions system that favors students who are already enrolled could make it difficult for incoming freshmen to win spots in classes. That has given rise to a proposal to place perennial students—those who accumulate credit after credit without ever graduating—at the back of the line.

To many in community-college administration, accessibility remains a near-sacred obligation..."Our two-year schools are open-admission institutions. They accept students who have high school diplomas."

… [S]ome community colleges are considering establishing an academic bar. "They're saying, 'Maybe we should set a floor—a certain level of skills you need to have' " to win admittance.

This article begs several question.  Three in particular stand out:

According to the American Association of Community Colleges (emphasis is mine),

Community colleges are centers of educational opportunity. They are an American invention that put publicly funded higher education at close-to-home facilities … they have been inclusive institutions that welcome all who desire to learn, regardless of wealth, heritage, or previous academic experience. The process of making higher education available to the maximum number of people continues to evolve at 1,173 public and independent community colleges.

• serve its community as a community-based institution of higher education

From the American Association of Community Colleges Fast Facts (Data are derived from the most current information available as of December 2009):

I was interested in understanding more about the students enrolled in community colleges.  This type of information is not available at the national level, but it is available for the California Community Colleges system (CCC system).  So to delve a little deeper into the data, I focused my analysis on California.

The California Community Colleges is the largest higher education system in the nation.  It is comprised of 72 districts, 112 colleges and enrolls more than 2.9 million students. Community colleges provide basic skills education, workforce training and courses that prepare students for transfer to four-year universities. The colleges also offer opportunities for personal enrichment and lifelong learning.

According to the Fall 2009 enrollment status of CCC system students (see following table and graph),

This distribution of students has remained relatively constant since at least 2007. 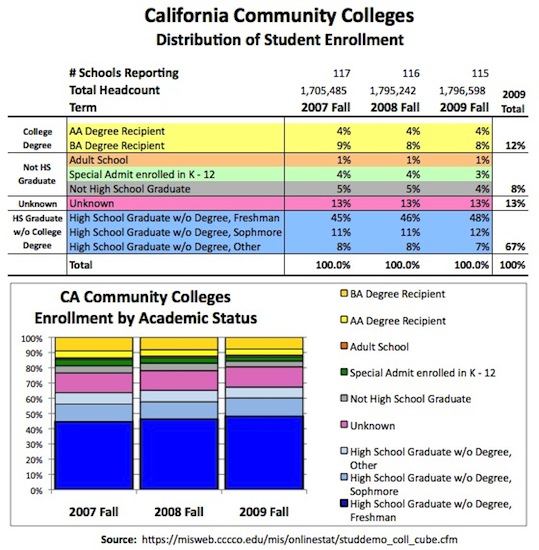 What this distributions says is that the CCC system is serving its community members at different capacities:

According to the article (emphasis mine),

Some educational experts are skeptical that community colleges will ever serve as an effective bridge to baccalaureate degrees. While the new Pearson Foundation survey and other polls consistently show a majority of community college entrants aiming for a four-year degree, a recent report from the National Center for Education Statistics shows that fewer than 12% of students who entered a two-year school in 2004 had a baccalaureate degree by 2009.

There is a strong implication here that the community colleges have a mission to transition students into 4-year schools and have them receive bachelor degrees, and that the system is failing in this mission.  Is this an accurate expectation?

How likely is it that students who entered community college in 2004 would have met all these requirements?

I would surmise that students who choose community colleges over four-year colleges either:

To the extent that my presumption is accurate, community college students would therefore be very unlikely to have met the requirements listed above for earning a baccalaureate degree within five years of starting their studies.  In this case it would be unreasonable to expect a majority of community college students to earn a bachelor’s degree within five years of starting college.

After considering the five-year graduation rates at California’s four-year institutions, especially the Cal State and technical/vocational schools, the 12% rate for community college students does not seem so dismal.

Well then, if CCC system students are not earning baccalaureate degrees within five years of entering the CCC system, what other goals might they be achieving?  The CCC system collects information from entering students about the goals they hope to achieve from attending community college. The question is asked as follows:

Enter up to three goals with the primary goal entered first, then the secondary goal, then the tertiary goal.

A:  Obtain an AA degree and transfer to a 4-year institution.

B:  Transfer to a 4-year institution without an AA degree.

Unfortunately, I did not have access to the students’ responses to this question.  However the options given suggests that students might have any number of valid reasons for enrolling in community college other than eventually earning a bachelor’s degree. As such, I would say that the fact that only a minority of CCC system entering students earn a bachelor’s degree within 5 certainly does not years mean the community colleges are not meeting their missions or otherwise providing a valuable service to the community.

The CCC system provides enrollment counts, retention rates (received outcomes for classes), and success rates (successfully passed classes) for students enrolled in each of 24 academic programs.  I decided to use this information to see how committed CCC system students are. 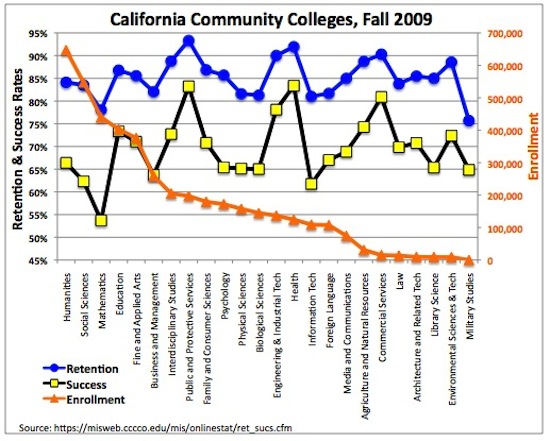 A further examination of the data (not presented here) shows that the retention and success rates have been stable at least since 2007.

What this information shows is that

If students in the different academic programs all had similar abilities, resources, and motivation, then the retention and success rates would be similar across programs.  The fact that the different programs actually exhibit different retention and success rates suggests that, in contrast, students in the individual programs differ as to abilities, resources, and/or motivation.

One of the more important aspects of motivation is the value of earning an AA in a particular area.  The high success rates of students in Public and Protective Services, Health, and Commercial Services suggests that earning an AA in these areas might be more valuable than earning an AA in, say, Biology, Physics, or Psychology.

Now let’s look at a further breakdown of retention and success rates by (1) programs with high, medium, and low enrollments, and (2) age of students: 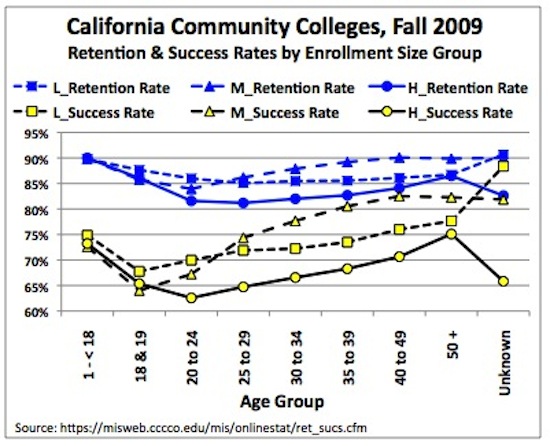 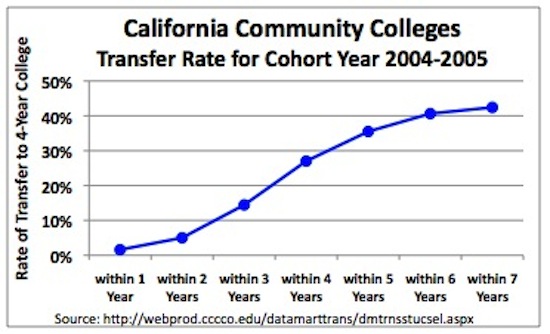 If I look at a finer breakdown of transfer rates by age group, I see that a significant minority of younger students transfer to four-year colleges within seven years, but that the transfer rates decrease with age group: 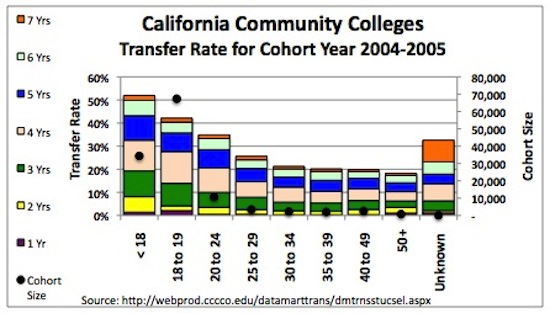 What Are California Community Colleges Achieving?

Non-HS Graduates (At Least 12% of Students)

HS Graduate (At Least 67% of Students)

College Graduate (At Least 8% of Students)

How successful are community colleges in facilitating their students’ goals?  It’s difficult to say.  To know for sure, I would have to have information on the ultimate disposition of the community college students for each of these groupings.  Unfortunately, I do not have this information.

What I can glean from the information provided is that

Based on success rates, I conclude that most students in the system are becoming more educated, in which case community colleges are providing a nontrivial amount of value to the community.

Based on transfer rates, I conclude that community colleges are facilitating the transition to four-year institutions for a significant portion of its students.

Based on associate degree awards, I conclude that community colleges are providing a nontrivial number of its students with two-year degrees.

What Are the Socially Optimal Alternatives for Community Colleges?

According to budget data for the CCC system, student fee revenues cover only a very small portion (4 – 6%) of the total costs of running the schools.  The vast majority of funding comes from state apportionments (43 – 45%) and local property taxes (30 – 32%). 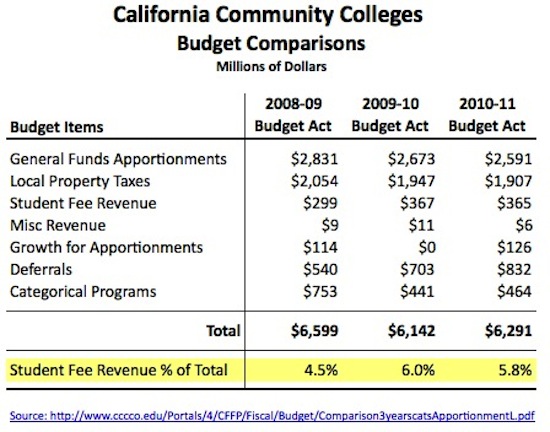 What this means is that raising tuition will not solve the bigger financial problems community colleges are facing, but it will impede their mission by decreasing accessibility.

Community colleges provide social benefits to the communities they serve.  If forced to make cutbacks, they should figure out which of their offering provide the more value to the community and which provide less and target the cutbacks for the programs that are providing less social value.

One aspect of value is providing opportunities that students cannot obtain elsewhere.  This begs the question: What are the alternatives available to each of the various students groups?  Community colleges provide among the least-cost, most convenient alternatives to students in each group.  This suggests that one alternative is to decrease access to those who can afford to pay for alternatives, such as private tutoring.

Fairness might entail limiting the opportunity available to each student.  In this sense, one alternative is to decrease access to students who are lingering in the system.

Efficiency considerations might entail decreasing offerings in areas with low student success rates.  On the other hand, these might be the problem areas (e.g., remedial education) precisely where students need the most access to be productive members of society.