Will Adoption of Electronic Medical Records Live up to the Promise?

Proponents of electronic medical records (EMR) claim their full-scale adoption will lower the costs of providing healthcare, improve the quality of healthcare, and save lives.

In the latest step toward the computerization of Americans' medical information, President-elect Barack Obama said in a speech Thursday that the government will push for electronic health records for all Americans within five years in order to save both dollars and lives.

"To improve the quality of our health care while lowering its cost, we will make the immediate investments necessary to ensure that, within five years, all of America's medical records are computerized," Obama said in a speech from George Mason University in Fairfax, Va. "This will cut waste, eliminate red tape and reduce the need to repeat expensive medical tests."

"But it just won't save billions of dollars and thousands of jobs; it will save lives by reducing the deadly but preventable medical errors that pervade our health-care system," he said.

Will electronic medical records actually live up to these promises?

An analysis was undertaken to examine all the various plusses and minuses – in terms of costs, quality of care and efficiency of care – electronic medical records are expected to achieve and have been found to have achieved with their implementation in the US.

This blog entry provides a summary of the actual/expected gains and losses found and answers the question posed above as to whether or not adoption and use of EMR systems will reduce medical errors.

A full copy of the report is available here for download.

A summary of gains and losses for each of providers, payers, and patients is presented in Figure 6 below.

What is clear from the analysis is that just about all of the fiscal costs incurred to adopt EMR/EHR systems are borne by the providers in the short run, while the benefits to physicians are only realized later on, some in terms of fiscal benefits, and other in terms of quality of care and efficiency gains, which may or may not translate into fiscal gains in the long run.

Payers incur lower costs relative to those incurred by physicians to adopt EMR/EHR systems, yet they receive substantial benefits, in the longer term, in terms of lower costs and greater quality of care and efficiency, which will most likely enable greater profits in the long run.

With the adoption of EMR/EHR systems patients incur both quality of care and efficiency costs and benefits, notable of which is loss in privacy.

What also becomes clear from the analysis is that while private parties (physicians) incur most of the fiscal costs, the total benefits realized accrue to society in the form of better quality of care for patients and a potentially more efficient healthcare system. 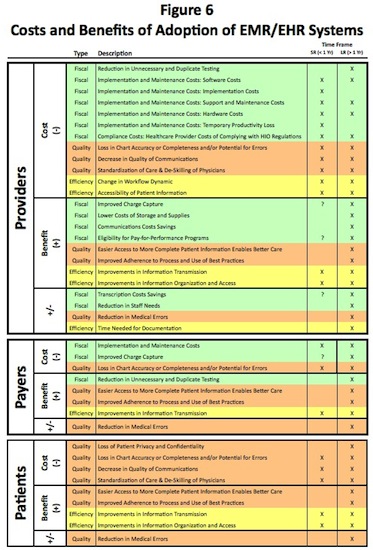 Areas with the Potential for Most Gains

The analysis of gains and losses associated with the adoption of EMR/EHR systems provides an indication of areas with the potential for the greatest amount of gains.

First, there is the potential for adoption of EMR/EHR systems to prevent medical errors and save lives through automatic checks, for example, for drug interactions, patient allergies, or wrong dosages.

Second, there is the potential for an eventual reduction in unnecessary testing. In the longer term, when a significant portion of healthcare providers have adopted EMR/EHR systems, the ability of providers to aggregate patient information across different providers will reduce the need for some duplicate testing. However, these benefits will not start to accrue until “enough” providers have adopted EMR/EHR systems. On the other hand, much of the “unnecessary” testing that goes on today in response to physicians’ fear of lawsuits and patients’ demands for the latest tests and treatments will not (necessarily) be reduced by adoption of EMR/EHR systems.

Third, the use of checklists and alerts enabled by adoption of EMR/EHR systems will lead to greater adherence to process in those cases when physicians have not previously been fully informed of recent findings or best practices. However, greater adherence to process will not (necessarily) be achieved in those cases where physicians are aware of the standards but believe they are not appropriate for the patient at hand.

Fourth, efficiency gains will probably be large for those members of the healthcare system who need to access, organize, or transmit information contained in patient records.

Areas with the Potential for Most Losses

The analysis of gains and losses associated with the adoption of EMR/EHR systems suggests there is the potential for significant losses.

Second, with the ability of physicians to justifiably (and unjustifiably) capture more revenue with the same treatment of patients, there is the potential for total payments for medical services to increase without any corresponding changes to the quantity or quality of care provided.

Third, the adoption of EMR/EHR systems will require healthcare providers to incur significantly greater costs of operations in the form of higher IT costs (hardware, software, support) than those which are currently needed to support paper records. There will also be added administrative costs in the form of compliance with EMR/EHR systems-related standards, reporting of patient data, and applications for incentive payments.

Fourth, an unfortunate but inevitable cost associated with adoption of EMR/EHR systems is the greater reliance on computer systems and the associated decrease in verbal/visual communications among members of the healthcare system. Notable is the decrease in patient-physician non-verbal communications associated with physicians’ need to look at the computer screen rather than be able to look at the patient while entering and accessing patient information.

Finally, there’s the potential for de-skilling of physicians and associated losses of creativity and independent thinking that will result from the standardization of care, together with physicians’ mode of recording of patient data.

To What Extent Will Adoption of EMR/EHR Systems Reduce Medical Errors?

One of the most highly touted benefits associated with adoption of EMR/EHR systems is the decrease in medical errors that will result from automated checks for drug interactions, patient allergies, or wrong dosages. However, the analysis indicates that while there will most assuredly be decreases in certain types of medical errors, adoption of EMR/EHR systems will also create new types of errors. The question then becomes: will the potential for reduction in some errors be greater or less than the potential for increases in other errors?

Clearly, adoption of EMR/EHR systems will prevent many errors that are due to mistakes or lack of knowledge, such as drug interactions, allergies, and inaccurate or inappropriate dosing of medications.

However, adoption of EMR/EHR systems will not reduce the overuse of healthcare services associated with physician advocacy/enthusiasm or referrals, or those associated with patient requests for the latest treatment or medication, assuming insurance reimbursement is not an issue.

Additionally, adoption of EMR/EHR systems will introduce new types of errors, such as those associated with data juxtaposition, cut and paste of information from one patient’s records into another, the unintentional posting of one patient’s data in another patient’s files, or those associated with software or hardware glitches. System vendors/users should be educated as to the potential of these types of issues to cause inaccuracies in patient files, so as to minimize their occurrence to the greatest extent possible.

The new workflow processes and the ways in which healthcare providers interact with the new technology will also lead to unpredicted outcomes. Along these lines, Harrison et al. (2007) note

This is another area in which system adopters should be alerted so they may be on the lookout for negative outcomes. To the extent that a non-punitive reporting process exists in the healthcare facility, and its use is encouraged by facility operators, many of the newly emergent errors may be reduced and/or eliminated over time.