Let me summarize what I have covered so far.

1.  My goal is to look at a new society being established in which each citizen is endowed with the rights of life, liberty, and the pursuit of happiness.

2.  The citizens of the new society which to establish a government to uphold their rights.

3.  I proposed that such a government should satisfy the following criteria:

A.  Government should intervene in the lives of the citizens only when the total social benefits of doing so outweigh the costs

B.  The government should provide and enforce laws and infrastructure to facilitate a civil society, that is, governments should

i.  Hold citizens accountable for their actions

ii.  Provide citizens with a civil and criminal justice system

C.  The government should facilitate an efficient economy. Since free markets are efficient when they lead to competitive equilibria, government intervention will only be warranted (necessary not sufficient condition) when there are market failures

i.  When markets are characterized by asymmetric information, government can improve social welfare by

a.  requiring information disclosure by parties with private information

b.  putting the legal liability on parties with private information

c.  provide for insurance in other risky situations

ii.  When markets are characterized by externalities, government can improve social welfare by taxing or subsidizing citizens actions

iii.  When markets are characterized by natural monopoly, government can improve social welfare by establishing a regulated monopoly

iv.  When markets are characterized as public goods, government can improve social welfare by subsidizing or directly providing for the provision of public goods

Make sure to include in that portion of the total economy that government should account for all aspects of the burden of government on the nation:

Let’s see what portion of the total economy government has actually accounted for:

If you include the costs citizens must incur to comply with government laws and regulations, the portion of the current economy that government now accounts for is 60%:

Sources of information in the above two graphs:

Is it possible for a people to be free and to be able to pursue happiness, if more than half of the nation’s resources are taken from its citizens and expended by government?

What happened to a government that would serve only to facilitate a civil society and an efficient economy?

Let’s take a closer look at where Federal outlays are occurring: 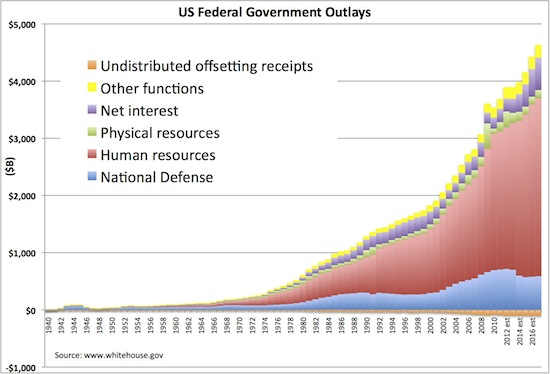 The vast majority (67%) of 2011 Federal outlays are spent on human resources. Let’s take a closer look at where that human resources spending is going. 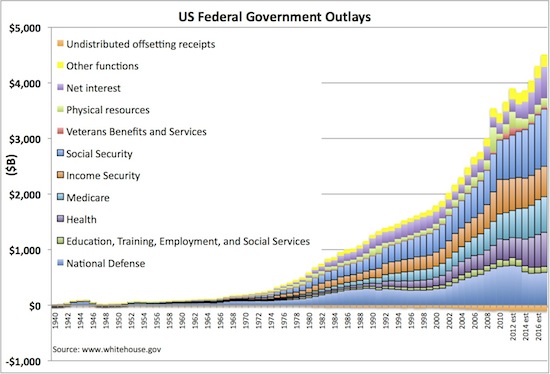 The data indicate that in 2011 the portion of Federal outlays were:

From the Heritage Foundation:

As scholar James Q. Wilson has stated, “The poorest Americans today live a better life than all but the richest persons a hundred years ago.” In 2005, the typical household defined as poor by the government had a car and air conditioning. For entertainment, the household had two color televisions, cable or satellite TV, a DVD player, and a VCR. If there were children, especially boys, in the home, the family had a game system, such as an Xbox or a PlayStation. In the kitchen, the household had a refrigerator, an oven and stove, and a microwave. Other household conveniences included a clothes washer, clothes dryer, ceiling fans, a cordless phone, and a coffee maker.

At the same time, if people know the government will provide for them, then they have less (no?) incentive to provide for themselves. This creates a serious moral hazard problem, especially as it relates to people saving for retirement.

Thomas Jefferson believed that each generation was responsible for creating its own laws and paying for its own debts. As Richard K. Matthews in The Radical Politics of Thomas Jefferson: A Revisionist View, describes Jefferson’s beliefs:

Each generation is responsible for its own monetary matters; if one generation contracts debt which it cannot pay, the succeeding generation (calculated by Jefferson on the basis of mortality tables to evolve every nineteen years) is under no compulsion to do so. Furthermore, by making this principle public policy (i.e., known to the world), both borrowers and lenders are liable either for observing these rules or paying for the consequences.

In the nineteenth year, automatic termination applies to all the laws and constitutions of the society. Quite simply, this means that approximately every twenty years, if not more often, society must reaffirm or construct anew all of its statutes and institutions… He {Jefferson] wants to institutionalize revolution in order to keep the Spirit of 1776 perpetually alive. By this bold innovation, he hopes, first, to sustain every man’s interest in governing himself, as opposed to being either politically and economically ruled from the grave or being government by a permanent aristocracy ; and second, to keep the positive laws of society in harmony with the evolutionary progress of man.

When government intervenes, who decides when the problem has been sufficiently addressed?

To the extent that certain citizens set higher expectations than others, those citizens are imposing greater burdens on taxpayers, thereby depriving citizens of liberty.

How clean should the air and water be?

How much government-reimbursed medical care should old people receive?

How many roads or bridges should be built? How large or sturdy should they be?

How many policeman are enough to provide “adequate” safety?

How much information disclosure is “enough”? For pharmaceutical companies? For investors? For used car buyers?

How much access should businesses be required to provide for disabled individuals?

What happens when the burden of government becomes too much for the productive people who are paying the costs?