Why Are Healthcare Costs So High? - Part 1

Trends in Total US Healthcare Expenditures

Trends in Healthcare Expenditures by Condition

The total annual costs of healthcare paid by each individual is the sum of the healthcare premiums he pays and the out-of-pocket costs he incurs:

Roughly speaking, the annual insurance premium an individual pays is the average of the total annual costs paid by his insurance company for the healthcare costs incurred by all individuals in his (age) group. What this means is that if the healthcare costs of one individual rise, then that individual does not bear the full burden of the costs increase, but rather, the burden is shared by all members of the group. This is the very nature of risk-pooling, and it works fine when all the members in the group face the same risks.

Out-of-pocket costs for healthcare depend on the type of coverage an individual has, plus the amount of healthcare individuals use.

Moving on, the amount of healthcare an individual will use/need during the year depends on several factors:

Obviously, people can’t control whether they have bad genes or bad luck. However, they can control the type of lifestyle they live and whether they comply with their doctors’ recommendations.

This begs the following question: To what extent are healthcare costs attributable to factors that people cannot control (bad genes and bad luck), as opposed to factors that they can control (lifestyle and compliance)?

Most people would probably agree to have society (government) subsidize healthcare costs associated with factors people cannot control. However, to the extent that people choose to not control those factors over which they do have power, then to what extent should society be responsible for subsidizing those people’s higher healthcare costs?

Clearly, the issue becomes more important as the costs of healthcare have increased so dramatically over the years.

Trends in Total US Healthcare Expenditures

To what extent are healthcare costs attributable by factors that people cannot control (bad genes and bad luck) as opposed to factors that they can control (lifestyle and compliance)? 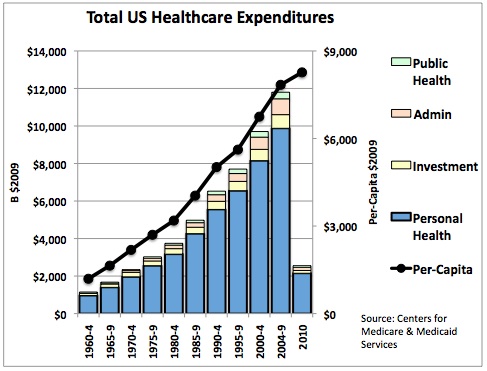 Averages and growth rates for per-capita healthcare expenditures (the black line in Figure 1) are provided in Figure 2.

During the first half of the 1960s, $1,193 was spent per person annually on personal healthcare , and by the 2010, that number had grown to $8,266. While growth rates in per-capita spending have decreased over time, the absolute levels have increased almost seven times during the period. 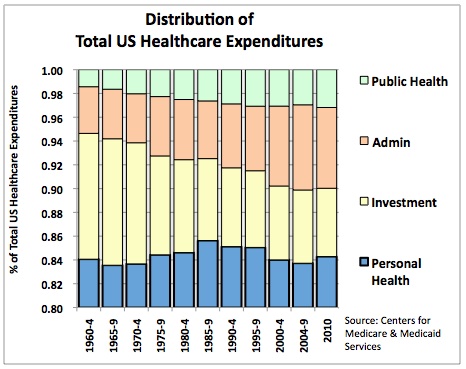 As seen in Figure 3,

The Other Personal Healthcare Expenditures category includes in decreasing order of 2010 expenditures:

Figures 5 and 6 present the distribution of personal healthcare expenditures over the period. 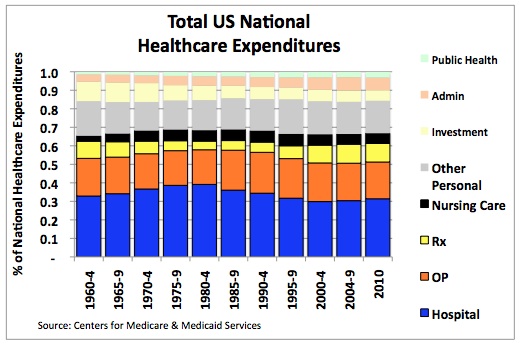 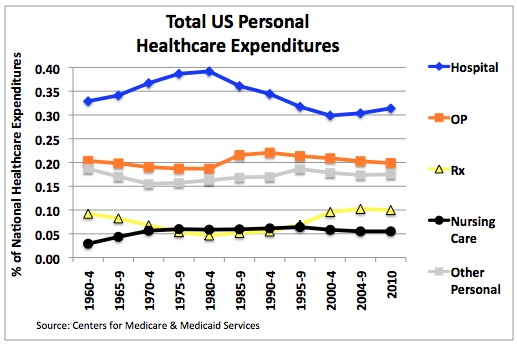 Figures 4 through 6 indicate that there seems to have been a shift in the trend of healthcare spending between the 1980 – 1984 period and the 1985 – 1989 period. More specifically,

Trends in Healthcare Expenditures by Condition

In 1996, the US Department of Health and Human Services (DHHS) began its MEPS Survey, which collects survey information on healthcare expenditures for specific medical conditions.

The Medical Expenditure Panel Survey, which began in 1996, is a set of large-scale surveys of families and individuals, their medical providers (doctors, hospitals, pharmacies, etc.), and employers across the United States. MEPS collects data on the specific health services that Americans use, how frequently they use them, the cost of these services, and how they are paid for, as well as data on the cost, scope, and breadth of health insurance held by and available to U.S. workers.

The MEPS survey reports expenditures for different medical conditions separately, depending on whether the expenditures were incurred for hospital inpatients (HIP) or in emergency rooms (ER), as outpatient services in physicians offices (OP), or for prescription medication (Rx). 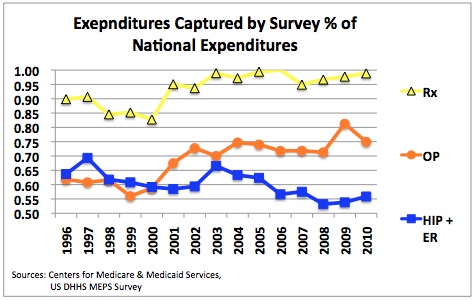 Figure 7 shows that the Survey data are relatively complete for prescription data, but that the surveys fail to capture about one quarter of healthcare expenditures in physician offices and almost half of expenditures in hospitals. Nevertheless, the portion of data captured in the MEPS Surveys is large enough so as to give us a good indication of what’s going on.

The MEPS Surveys include healthcare expenditures on patients that fall into 56 different medical conditions. However, as seen in Figure 8, the top 20 conditions account three-fourths of all MEPS expenditures. 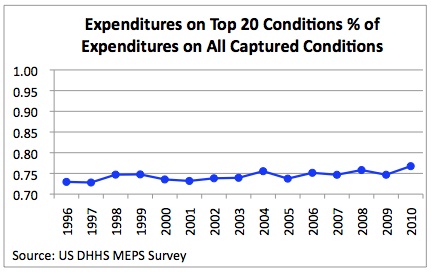 Figures 9 and display the total historical expenditures captured by the MEPS Surveys for the top 20 medical conditions. The numbers in parentheses in the figure legends indicates the 1996 – 2010 growth rate in total expenditures for each condition. Of the top 20 conditions,

As an aside, according to F Xavier Pi-Sunyer, "Health Implications of Obesity," the following diseases are associated with overweight and obese individuals:

Other sources (e.g., the American Diabetes Association) note that people with diabetes tend to have higher rates of depression.  Taken together, this means that at least 7 of the top 10 conditions may be associated with being overweight/obese. (This issue will be discussed further in another blog post.)

In other words, the large increases in expenditures for the top 20 medical conditions is mostly explained by increases, often substantially, in the numbers of patients being treated for the conditions, rather than increases in the costs of treating each patient with the conditions.

Also, most of the increases in healthcare expenditures are going for patients who have healthcare problems that are at least somewhat under their control (lifestyle and compliance issues), as opposed to healthcare issues not under their direct control (genes or accidents).

To the extent that relatively healthy people are forced to subsidize the costs of high-intensity healthcare users, the healthy people appear to be paying a lot of money for healthcare conditions suffered by people receiving the subsidies that are largely prevantable, if the recipients were only to take the appropriate measures.

My next blog post examines the distribution  of healthcare dollars across the population: Why Are Healthcare Costs So High? - Part 2