The Structure of the Currency Game

Definition of Volume of Trade

Patterns in Volume of Trade by Country GDP

In my previous blog entry, “Making Sense of the Currency Wars”, I discussed the basics of exchange rates – how they’re defined, how they’re determined, and the pros and cons of having a strong or weak currency – and I discussed currency wars – how they work and how they affect participant economies. I also defined how currency (exchange rate) wars form a game between countries, where the losses of losers would appear to far outweigh the gains of winners. In this blog entry, I take a closer look at the currency game.

The Structure of the Currency Game

Who a country trades with and how much they trade will depend on several factors, including

•  What different countries’ needs are (supply vs. demand)

•  What the exchange rates between countries are (relative prices)

The greater is the volume of trade (exports and/or imports) between two countries (blocs), the greater will be the impact on those two countries’ imports and exports resulting from any changes in the exchange rate.

Definition of Volume of Trade

whereas relative volumes are measured as absolute volumes relative to countries’ GDPs:

A few brief points of note:

•  Countries may very well run trade surpluses (X > M) or trade deficits (X < M) for short periods of time. However, theoretically, over the long run, any imbalances should be forced away, so that the value of a country’s total exports over time will equal the value of its total imports (valued in country i’s currency, where Eijt is the exchange rate between country i and country j at time t):

In reality, though, different types of political relationships between countries enable countries to maintain trade imbalances with particular trading partners for significant periods of time.

•  In any given period, one country’s exports is another country’s imports, so total global trade is a zero-sum game (valued in a numeraire currency):

Patterns in Volume of Trade by Country GDP

Q: Are the countries that are largest in terms of GDP the same counties that have the largest absolute or relative volumes of trade? 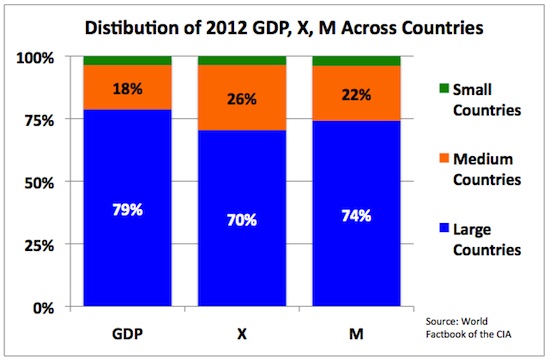 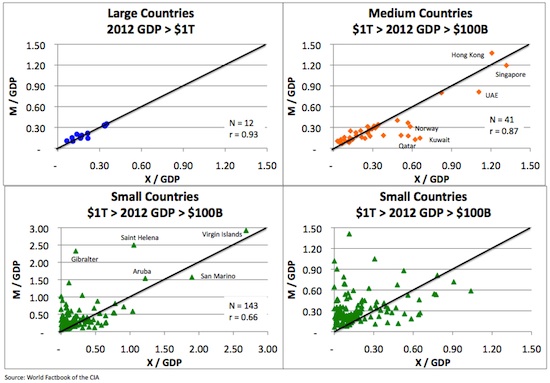 The data in Figure 2 show that

•  The larger countries tend to trade relatively less (though the data show they trade absolutely more) than most medium and small countries.

•  The larger countries have more balanced trade, that is, exports more closely approximate imports, than that for most medium and small countries.

•  The countries with large excess exports tend to be oil countries.

Now that we see that many of the countries that are relatively heavy exporters are oil countries, let’s exclude those countries from the results in Figure 1 and see what we get. The medium sized oil countries are Iran, Saudi Arabia, Nigeria, Norway, Algeria, UAE, Qatar, Kuwait, Angola, and Cuba. Figure 3 presents the same information from Figure 1, after excluding the oil countries. 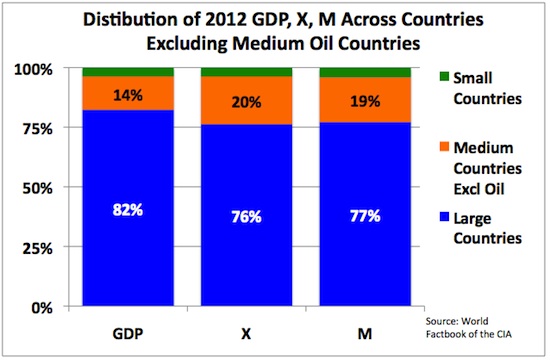 Figure 3 shows that if we exclude the oil countries from the analysis, then

•  Relative exports approximately equal relative imports for large countries and for medium sized countries; that is, the oil countries are the ones with disproportionately large trade surpluses (X > M).

So the data show that medium-sized countries tend to rely relatively more on trade than do large countries.

Figure 4 provides a list of the world’s largest traders, together with information on their GDP, currency, and trade volume. 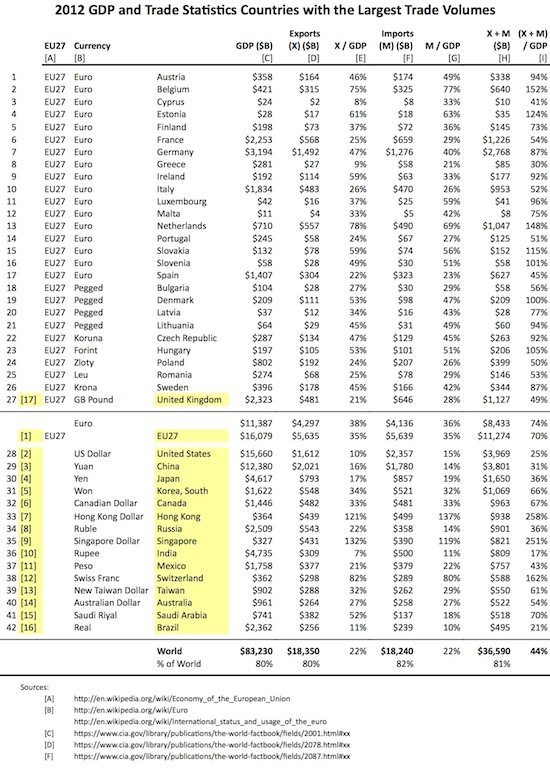 The trading bloc formed by the 27 countries in the European Union, known as EU27, represents the largest trading volume (exports plus imports) by a single bloc, $11.3 T in 2012, or 31% of global trade ($36.6 T in 2012). However, the EU27 consists of countries that use different currencies. If we consider only those countries within the European Union that use a single currency, then we are left with 21 countries comprising the Eurozone, which represent a total of $8.4 T in total trade, or 23% of global trade.

An analysis of the Currency Game would ideally consider the Eurozone as a single bloc (player), with Hungry, UK, the Czech Republic, Sweden, Romania, and Poland each as separate players, since they each use different currencies. However, trade data are aggregated for the EU27 bloc as a whole, rather than for only for the Eurozone countries. As such, the analysis presented below considers EU27 to be a single player, rather than the ideal, 7 distinct players. Since it is such a large country, however, I do provide information separately for the UK, in addition to information for EU27.

Now that we have a list of the largest trading countries/blocs, the next step is to see who they trade with.

The European Commission provides country level data on who trades with who and how much. The data show that for the 16 largest countries/blocs identified in Figure 4, excluding Taiwan, for which data weren’t available, each country/bloc has roughly the same pattern of trade: a large number of trading partners with whom they trade a small amount and a few partners with whom they trade a large amount (see Figure 5). In other words, for large countries the relationship between number and size of trading partners may be defined by a power law. 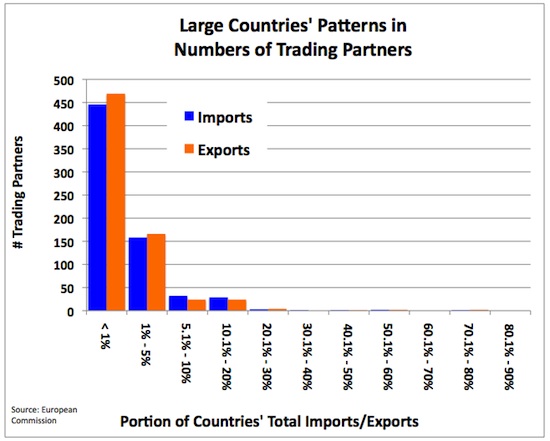 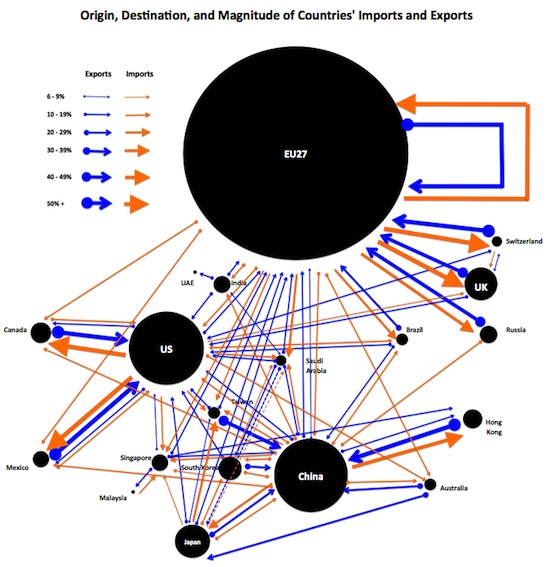 The size of each arrow represents the relative volume of a country’s trade that is exported out of or imported into that country to or from another. For example, the large blue arrow from Canada to the US indicates that more than 50% of Canada’s exports flow to the US, and the large orange arrow from the US to Canada indicates that more than 50% of Canada’s imports also come from the US.

•  The largest trading countries/blocs, are all heavily connected to one another -- as well as to many other smaller countries -- via exports and imports.

•  Certain countries are satellites of other countries, in the sense that each satellite relies on a dominant country for a majority of its exports and imports. In particular

o   Canada and Mexico are both satellites of the US

o   Hong Kong is a satellite of China

o   Switzerland is a satellite of EU27

•  Increases in strength or weakness of a dominant country’s currency will have a momentous impact on trade flows to and from satellite countries.  In particular, in light of the recent slide of the Euro due to the financial crisis, Switzerland’s exports to Euro countries have been seriously impacted. This explains Switzerland’s response of weakening the Swiss Franc in an attempt to counter the recent decreases in Swiss exports Swiss exports to the Eurozone associated with rising prices of Swiss exports in euros.

There are two issues raised in the analysis that remain unexplained, but whose answers lie outside the scope of this analysis:

•  Why do medium-sized countries, where size is based on GDP, trade disproportionately more than large countries do?

•  Why do patterns in numbers of trading partners, together with associated volumes of trade, follow a power law?