Identify Patterns or Clusters in Research

Determine the Lay of the Land For Existing Research Areas

Determine the Lay of the Land For Potential New Research Areas

Managers of research and development (R&D) centers tasked with commercializing technologies face a dilemma. Only a small portion of the center’s discoveries are patentable. And patents generate prestige for both the institute and the researchers. As a result there is a strong desire to patent any discovery that is patentable. However, filing for patents and paying maintenance fees is costly, and the great majority of patents cannot be monetized. The challenge facing center managers, then, is to direct researchers to focus their attention on new discoveries that generate patents that are more able to be monetized.

Proper management of a center’s patents must surely start with generating a database containing descriptive elements of the center’s patents. After such a database has been created, a center manager can progress more easily into various types of patent mappings. If used effectively, patent mapping can serve as a tool for R&D center managers to effectively direct researchers to generate discoveries that are more able to be monetized.

The United States Patent and Trademark Office (USPTO) database contains most of the patents filed globally (applied for and issued), since the US is the most profitable market for most technologies. The following data elements relevant for managing a center’s research portfolio are available from the USPTO database:

Creating a database of center research information containing these basic elements should be a relatively quick and straightforward process. Rough assessments of patent groupings may be assessed by sorting the database on classification codes and dates.

Starting with a commercialized product, one can assess the entire concept (value) chain associated with that end product. The concept chain starts with identifying all of the patents and technologies embodied in the final product. These are identified as the green bubbles in the right vertical panel of Figure 1. 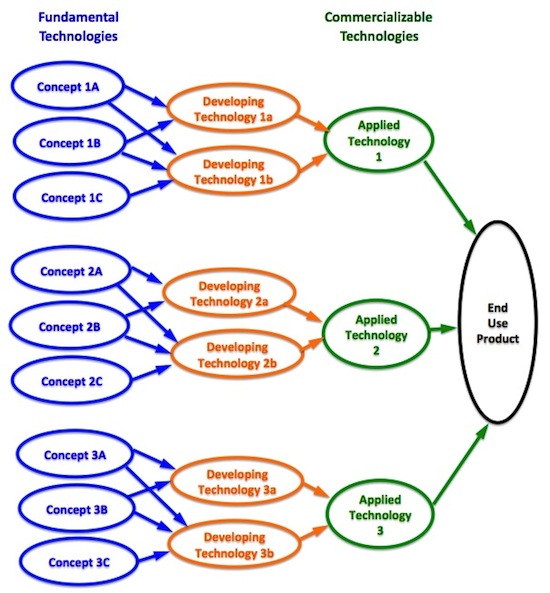 R&D center managers may utilize the types of concept chains depicted in Figure 1 in several ways to direct research.

Identify Patterns or Clusters in Research

Figure 2A: Identifying Patterns in Research 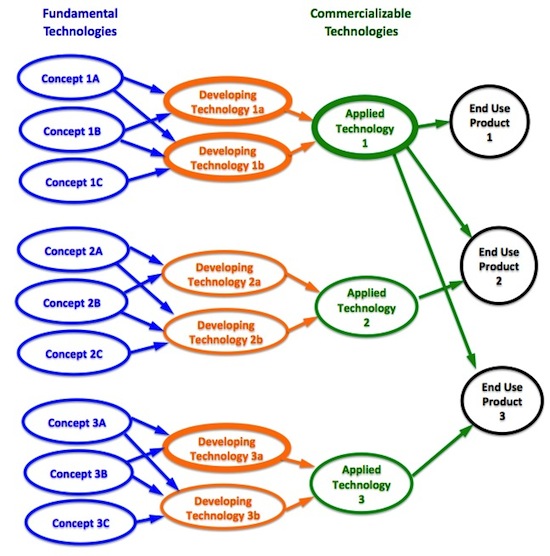 Figure 2B: Identifying Patterns in Research 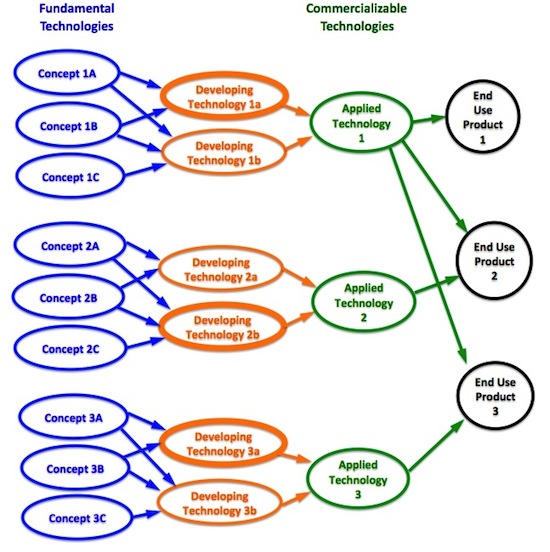 Suppose after mapping out the patents in the research areas, the center manager identifies his center’s patents as being associated with the thick bubbles in Figure 2A. Such a clustering of center patents in the area of Technology 1 would suggests that the center has a particular strength of expertise in that area.

Determine the Lay of the Land For Existing Research Areas

Figure 3: Establishing the Lay of the Land for Existing Research Areas 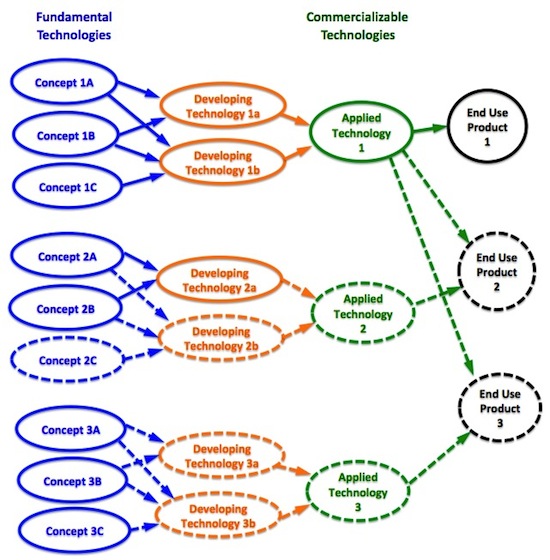 Once the lay of the land, as that displayed in Figure 3, has been established, the next step for center managers is to establish:

•  Which institutions are associated with each of the established concepts, that is, who are the research center’s competitors?

•  Which of concept areas might the center be able to pursue, that is, where does the center’s actual and potential expertise lie?

•  Given the established concepts and the requisite new developments, how likely is the center to be in successfully developing new commercializable products?

Determine the Lay of the Land For Potential New Research Areas

Center managers can also use concept chains to determine whether or not a proposed avenue of research should be pursued. The center manager accomplishes this in a similar manner to that established in the previous section, Determine the Lay of the Land for Existing Research Areas. The center manager identifies all existing patents in the research area and arranges the existing patents into a concept chain, from most fundamental to most applied, as in Figure 3.

Alternatively, suppose a researcher proposed pursuing an area corresponding to one such as Developing Technology 3a in Figure 3. If the center also has the expertise and resources to simultaneously pursue Developing Technology 3b in Figure 3, then supporting research in those areas might, in fact, be a promising use of center resources. Otherwise, the lack of requisite complementary expertise will inhibit the center’s success in that area.

By updating concept mappings over time, center managers can establish the progress of the center.

•  Research chains that are being completed by the center over time represent progress and areas for continued support.

•  Research chains that are being populated more quickly by competitors may represent areas that should be cut back by the center.

•  Research chains that are being established by others that connect to the center’s areas of expertise represent new potential areas of research.

Of course, the diagrams presented in the sections above are extremely simplistic. The end user technologies that generally come to mind, such as smart phones and laptop computers, embody hundreds, if not thousands, of patents and other technologies and know-how. Even the major component technologies contained in such products as smart phones and laptops -- such as processors, memory modules, operating systems, touchscreens, cameras, and GPS systems, just to name a few – themselves contain tens or hundreds of patents and technologies.

Generally speaking, all but the very largest research centers or companies will tend to cover only component or sub-component technologies that are licensed out to be used in larger systems. Additionally, single, isolated patents generated by research centers within specific technology areas tend to be of little value, due to (1) the prolific numbers of patents existing within many of even the most narrowly defined technology areas, and (2) the uncertainty surrounding the validity of any given patent (assuming the patent has not been upheld as being valid during the litigation process).

►  Focus on the most narrowly defined possible component or product areas, and

►  Encourage research that clusters within those narrowly defined areas.

In other words, rather than identifying end-use products presented in the diagrams above as smart phones or laptops, research centers should focus instead on technologies such as component modules that provide new functionalities for existing smart phones or laptops. This will increase the likelihood that center researchers will end up generating commercializable patents.

* Stephen W. Cheung is an independent contributor to this article. He currently works in engineering and technology development at a medical equipment maker in the San Francisco Bay Area. His undergraduate and graduate work were all in physics.