Will Traditional Retailers Continue to Struggle in On-Line Sales Markets?

Will Traditional Retailer Continue to “Struggle” with On-Line Sales?

A recent article in the WSJ, “Web Sales Remain Small for Many Retailers” by Shelly Banjo and Paul Ziobro describes the difficulties that retailers have been having trying to grow their online sales into significant portions of their businesses:

Nearly two decades after the Web revolutionized shopping, many big retailers are still struggling to turn the Internet into a big part of their business…

Online purchases accounted for just 5.8% of total U.S. retail sales in the second quarter of 2013, up from 5.1% a year earlier.

They note the small portions that online sales constitute for specific retailers, including Walmart, Target, and PetSmart. In particular,

•  While Walmart “has never reported its actual online performance,” it did say that “Web-based sales contributed [a paltry] 0.1 to 0.2 percentage point to Wal-Mart's 2.4% increase in U.S. comparable-store sales in fiscal 2013.”

•  “… A Target spokesman said that the retailer tells investors online sales currently make up less than 2% of its $73 billion in overall sales.”

•  “A PetSmart spokeswoman said the chain considers e-commerce a growth opportunity but because it currently represents less than 1% of its sales, it isn't a material part of the company's business.”

They further report that Amazon has continued to dominate online sales for its various markets:

Amazon.com Inc. sells more online than its next 12 biggest competitors combined, including Staples Inc. and Wal-Mart… Despite its greater online scale, Amazon continues to grow quickly and command a hefty share of new Internet sales.

The article provides a weak response by the lagging retailers to the situation, namely that online sales become muddled with in-store sales, so it doesn’t make sense to report on-lines separately from total sales:

Retailers including Target, Belk Inc. and PetSmart told the SEC that separating online figures doesn't give an accurate picture of their sales gains, because customers continually shift purchases between their stores, websites and mobile-phone applications.

Retailers have branded this the "omnichannel" approach, arguing that they don't care how a customer completes a purchase as long as they don't buy from a competitor…

Will multichannel retailers continue to struggle with growing their on-line sales portions of their businesses? Why does Amazon continue to dominate these markets?

The article is misleading in that it suggests that traditional retailers are on equal footing with Amazon when it comes to on-line sales. As such, any inability of retailers to successfully compete with Amazon or otherwise grow their online sales portions of their businesses reflects weaknesses in the retailers’ business strategies.

Yet, traditional retailers are not, in fact, on a par with Amazon.

Readers may recall the tremendous notoriety that the Webvan and Pets.com failures generated during the Dot-com bubble. Both ventures failed largely because low value-to-bulk items are simply not amenable to on-line sales. From “10 Biggest IPO Flops in History” by Dave Roos

Few dot-com flameouts were as public and well-publicized as Pets.com … Pets.com made its name through a witty advertising campaign featuring an exuberant stoner-dude sock puppet and the slogan, "Pets.com. Because pets can't drive"...

Blind to the fact that pet supplies made for lousy online sales (imagine the shipping costs on a 50-pound bag of dog food), Pets.com attracted big-name investors…

Pets.com had its IPO in 2000 and raised an impressive $82 million, but that wasn't anywhere near enough to make up for a leaky business plan. The stock went from a high of $14 per share at the IPO to a low of 22 cents a share…

Let’s start with the current market segment shares of traditional (bricks-and-mortar) retailers, such as Target and WalMart, as compared with market shares of Amazon, as displayed in Figure 1. 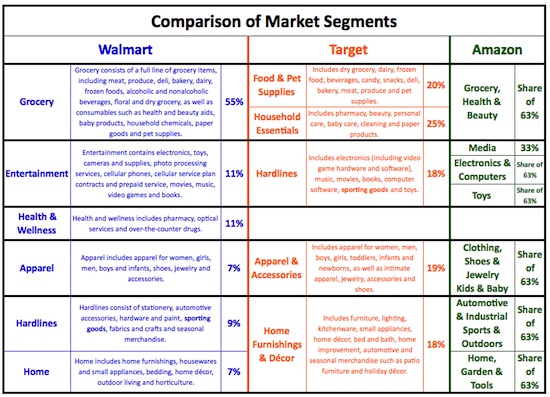 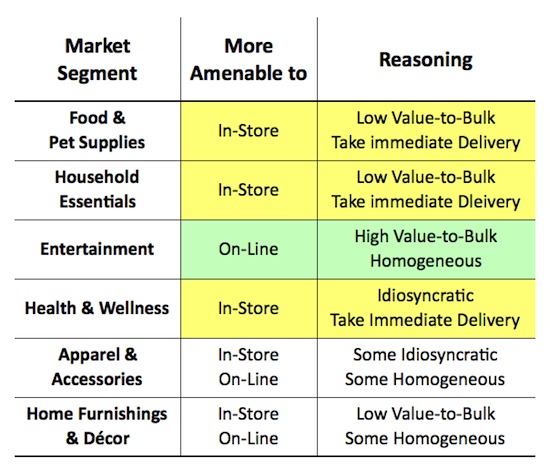 By definition, traditional retailers, with their bricks-and-mortar infrastructure, generate sales through in-store purchases (abstracting from traditional mail-order fulfillments). That is, they have a competitive advantage towards in-store sales. As such, when faced with competition from sellers with a competitive advantage towards on-line sales (e.g., Amazon.com), traditional retailers would optimize profits by shifting their offerings towards those products that are more amenable to in-store purchases. In the cases of Target and WalMart, this means 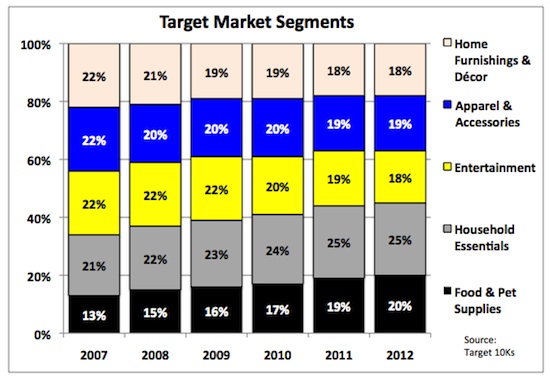 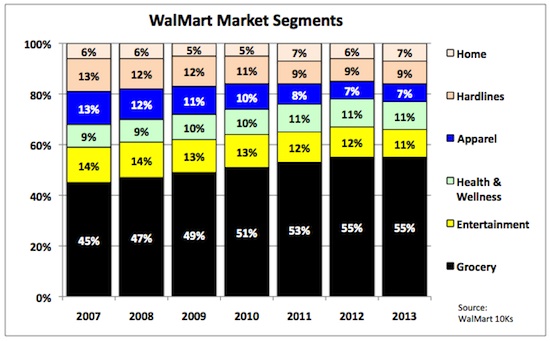 Amazon was established to be a pure-play on-line supplier. When it first started the company focused on sales of precisely those items that are most amenable to on-line sales: media. From Amazon’s 1990 10K Report:

Amazon.com, Inc. ("Amazon.com" or the "Company"), the Internet's number one book, music and video retailer, opened its virtual doors on the Web in July 1995. Amazon.com, one of the most widely known, used and cited commerce sites on the Web, offers more than 4.7 million book, music CD, video, DVD, computer game and other titles.

Over time, Amazon started offering sales in other, non-media segments, as seen in Figure 5. 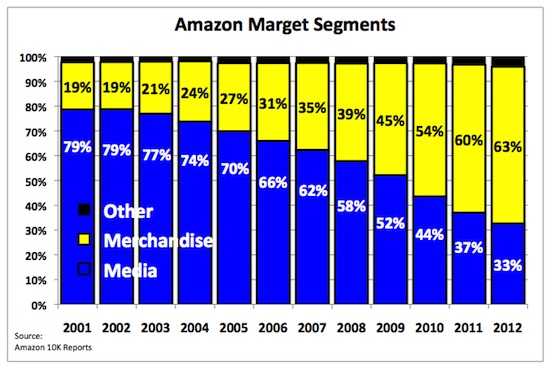 A breakdown of sales in specific non-media markets is not available. However, I presume that Amazon’s non-media sales include those items that are most amendable to on-line sales, namely homogeneous, high value-to-bulk, and non-perishable, low risk items, such as small appliances, accessories, toys, and regular, high-value-to-bulk consumables.

Will Traditional Retailer Continue to “Struggle” with On-Line Sales?

Returning to the message in the article, will traditional retailers, such as Target and WalMart continue to have difficulties growing their on-line sales relative to total sales?

The answer is yes, for two reasons.

First, on-line sales are a channel in which traditional retailers, saddled with bricks-and-mortar-related infrastructure, will always have a competitive disadvantage, as compared with pure-play on-line sellers, such as Amazon. As such, they will continue to have difficulties competing for on-line sales.

Second, profit optimization will continue to push traditional retailers towards those products which are more amenable to in-store sales. That means that products that are amenable to on-line sales will become an increasingly smaller portion of these retailers’ total offerings. This, in turn, will result in ever smaller portions of on-line sales relative to total sales.