Automation of Jobs, Part 3: The Nature of Jobs Has Changed over Time with the Introduction of New Technologies

In order to better asses the nature of changes in specific jobs over time, I collected employment data by occupation from 1940 from the Statistical Abstract of the US (Stat Ab) and compared it with the corresponding data for 2013, provided by the Bureau of Labor Statistics (BLS). I compared the numbers of people employed for almost 600 different detailed occupations in 1940 with the corresponding numbers of people employed in 2013. By using job titles and descriptions provided by the BLS, I examined the numbers and types of jobs that were lost, gained, and changed in nature between 1940 and 2013. Finally, I aggregated the nearly 600 sets of employment data into 126 courser occupation categories. The results of the comparisons are discussed below.

In order to be able to draw any reasonable conclusions from the employment data by occupation, I need to know that these data are relatively complete. To verify that they are, in fact, relatively complete, I compared the total job counts from the two sets of data (1940 and 2013) to other reported employment totals for those two years. Both the original, detailed job counts as well as the aggregate job count totals come from the same sources, Stat Ab and the BLS. However, the itemized data come from a different place (a different cut of the data) than the total jobs counts. Anyone who’s tried to piece together data from different sources – or even from different reports from the same source – knows that the data generally do not match. So what I’m looking for are sets of numbers that are relatively consistent with one another.

The total counts of employment by occupation are also presented in Figure 3, in column [G]. The two sets of totals (highlighted in yellow) are consistent enough to satisfy me that the employment data by occupation are complete enough so as to be able to draw general conclusions from a comparison of the 1940 with the 2013 data.

Job occupations with the largest gains in employment between 1940 and 2013 in terms of (i) percentage growth in number of jobs and (ii) absolute number of jobs gained are displayed, respectively, in Figures 4 and 5. 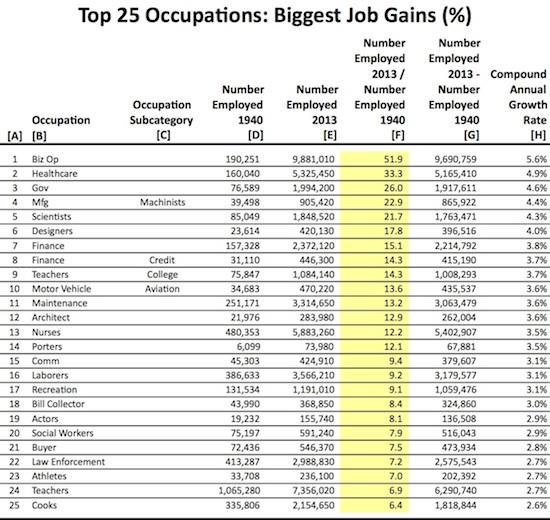 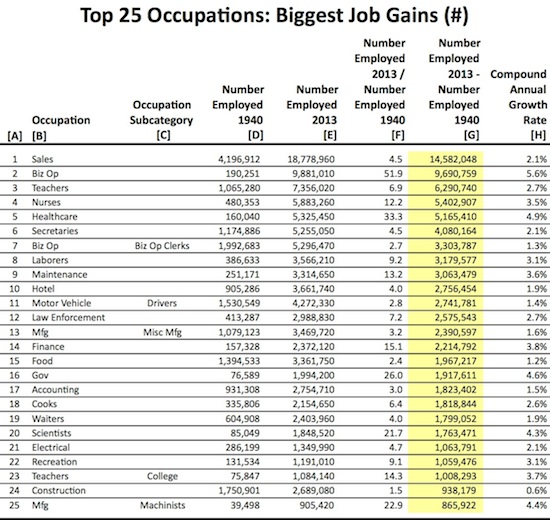 Of all the occupations examined, employment in “Business Operations” (Biz Op) yielded by far the largest percentage gains and the second largest gains in numbers of jobs. The Biz Op category includes, for example, executives, managers, HR and PR personnel, and analysts. This general Biz Op category excludes the more specific categories of “Biz Op Clerks,” “Shipping Clerks,” “Accounting,” and “Sales.” These latter four categories on their own were all high growth occupations as well in terms of number of jobs created. In other words businesses are big job creators.

Another large jobs growth area, ranking second in terms of percentage growth and fifth in terms of job gains, is “Healthcare”. The “Healthcare” category is a relatively narrow definition and excludes Physicians, Nurses, Pharmacists, Optometrists, Chiropractors, and Dentists, each of which comprise their own separate occupations. The Healthcare category does include, for example, physician assistants, lab technicians, emergency personnel, health and nutrition personnel, and other medical support personnel.

Nurses were another very large growth area, while the other health occupations listed above also grew faster than average. So the all-inclusive Healthcare industry is also a large job creator.

The occupation with the largest number of job gains is “Sales.” The Sales category includes, among other job descriptions, “Cashiers,” “Retail Salespersons,” “Fast Food and Counter Workers” “Sales Representatives,” and “Telemarketers.”

As mentioned above, Biz Op is the second largest occupation in terms of number of jobs gained, and Teachers – excluding college level professors – is the occupation with the third largest job gain.

Job occupations with the smallest gains (largest losses) in employment between 1940 and 2013 in terms of (i) percentage growth in number of jobs and (ii) absolute number of jobs gained are displayed, respectively, in Figures 6 and 7.

It’s probably no surprised that the “Farm” category was the big loser in terms of both percentage and number of jobs lost between 1940 and 2013. 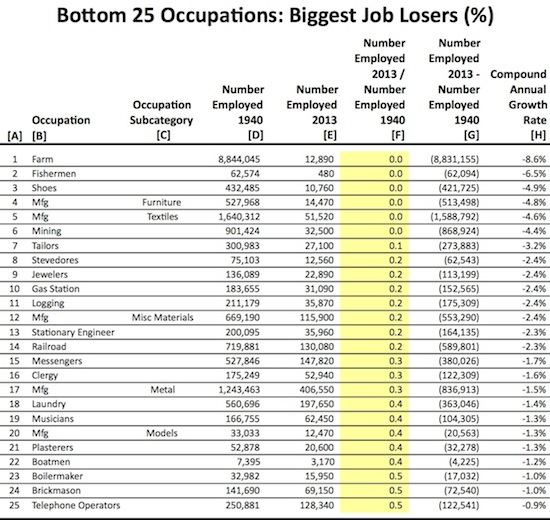 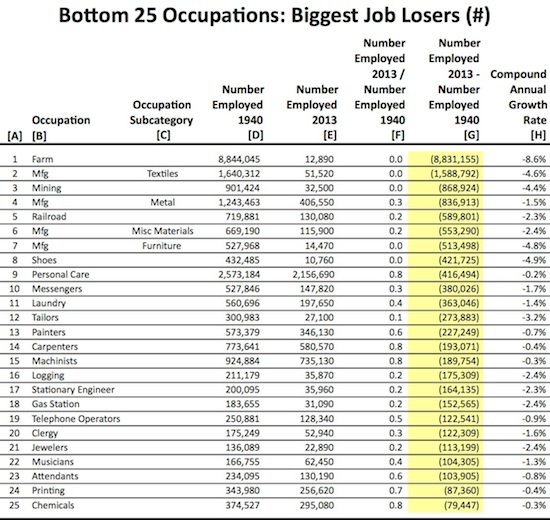 There are several new categories of employment that exist in today’s world that did not exist in 1940, which are presented in Figure 8. Of course, the big new job category is “Computer,” which includes, for example, programmers, engineers, data entry and analysis personnel, and computer maintenance and support personnel.

The second new job category is “Energy,“ which includes oil and gas workers, some of whom are most likely captured somewhere in the 1940 data, but also solar and wind turbine workers who surely did not exist in 1940.

The third new job category is “Animal.” The largest occupation within the Animal category is “Animal Caretakers,” and the category further includes “Animal Control Workers,” “Animal Breeders,” and “Animal Trainers.” “Veterinarians” constitute a separate category, and this category also yielded significant growth in employment between 1940 and 2013. So the pet care industry is one of the new, significant employers since 1940.

The last new category is “Fundraisers” which employs over 50,000 people. And those jobs do not include “Telemarketers,” which are another new, large category mentioned above. I wonder where Spammers are included in the counts. I really wish that category wasn’t nearly as large at it is.

New technologies introduced into the marketplace over the past 75 years did not simply result in job gains or losses in the various occupations. Rather, new technology also changed the nature of many jobs. For some tasks, technology replaced human labor that had been used to perform repetitive or routine tasks, while freeing up workers to perform more complex tasks. In other cases, technology enhanced worker productivity to the extent that prices dropped and goods and services became much more affordable, which ultimately increased the size of the market, and thus the demand for labor.

Another industry with large changes in the nature of jobs is Messengers and Delivery personnel (not classified as Postal Workers). This is an example of a job function for which technology enhanced worker productivity to such an extent that the size of the market increased dramatically. In 2013, the job classifications included “Messengers and Couriers” and “Cargo and Freight Agents.” The job gains are not nearly fully captured in these 2013 job counts, since FedEx and UPS truck drivers are lumped together with other “Driver/Sales Workers and Truck Drivers.” In contrast, in 1940, Messengers and Delivery Personnel were classified as “Messengers, Errand, and Office Boys and Girls,” “Deliverymen,” “Telegraph Messengers,“ and “Exp. Messengers & Ry. Mail Clerks.” People in these occupations performed the same basic function in 1940 and 2013, moving messages and packages from one place to another. However, new technologies introduced during the period massively increased worker productivity to the extent that more people could afford to send tremendously more “messages” and “packages” locally, regionally, nationally, and internationally.

The comparison of changes in employment by occupation between 1940 and 2013 reconfirmed what most people already knew: manufacturing industries tended to experience big job losses, while services industries experienced big job gains.

Many of the job losses in manufacturing were due to off-shoring of jobs, such as those in Textiles and Shoes. Off-shoring has been enabled by the introduction of new technologies that lower the costs of communication and transportation. There were also substantial numbers of production jobs lost to technology domestically, including those in Farming and Mining.

Many of the jobs gains were in whole new areas of the economy that had not previously existed, such as Computers and Pet Care. In fact, job gains in occupations within the Computers category epitomize technology’s creation of new jobs.

Finally, the nature of many job occupations has changed over time, such as that for Secretaries and Messengers/Deliverymen, where the change in nature was caused in no small part by changes in technology. As technology has replaced many of the more mundane job functions of Secretaries, such as dictation, typing and filing, these workers have morphed into Administrative Assistants, freed up to perform more abstract functions such as coordination and communication.

As for messengers and deliverymen, changes in technology have replaced most of the demand for labor associated with transporting information from one relatively localized location to another (Messengers, Errand, and Office Boys and Girls). At the same time, however, technology has created demand for labor associated with transporting objects from both relatively local as well as distant locations to others (FedEx, UPS, Google Express).

A summary of the nature of these changes in occupations is presented in Figure 9.

To summarize, I have thus established that new technologies have:

Go to Automation of Jobs, Part 1: Two Schools of Thought

Go to Automation of Jobs, Part 2: The Current Global Environment Is Unique

Go to Automation of Jobs, Part 5: What Will the Future Hold for Jobs?