Automation of Jobs, Part 5: What Will the Future Hold for Jobs?

The purpose of this series of analyses has been to better understand the extent to which future jobs in the US will be complemented by or substituted for technology and automation.

Summary of Analysis So Far

In Part 1, I established that there are two perspectives on the impact of new technologies on future labor markets:

•  The “This Time Is No Different” view suggests that based on what has always happened in the past, we can expect new technologies in the future to eventually create more jobs than they eliminate.

•  The “This Time Is Different” view suggests that further improvements in technology will further exacerbate the current trend toward a bifurcation of society, eventually resulting in an unskilled lower class and a skilled upper class.

In Part 2, I established that the circumstances that characterize the current global economic environment are unique. To briefly summarize, the current environment is global in nature, currently in the midst of a severe recession as well as a long-term state of transition as society adapts to new technologies, and actions undertaken by players (businesses, policymakers, etc.) will have an impact on other players globally. Since the current economic environment is different from those that existed in the past, any generalizations that attempt to project past experiences into the future must be carefully considered.

In Part 3, I compared jobs counts by detailed occupation categories in 1940 to those in 2013, and I established that new technologies have:

In Part 4, I established that computers can perform any cognitive or manual tasks that can be clearly defined and specified by a set of rules. On the other hand, computers cannot perform tasks for which data inputs and/or outputs are not well-defined or cannot be fully pre-specified. Such tasks involve (i) solving unstructured problems, (ii) working with new Information, or (iii) performing non-routine manual tasks. Alternatively described, computers do not possess the ability to (i) be creative or form new ideas, (ii) recognize large-frame patterns, (iii) engage in or with complex communications, or (iv) perform tasks requiring sensorimotor skills.

The Future of Jobs

I can use Part 3 job comparisons, together with Part 4 restrictions on what automation can and cannot do, to provide some indication as to how new technologies might affect the future of jobs. However, Part 2 suggests that since the current environment is unique, I must be careful about using past experiences to predict the future. To the extent that the predictions about the future gleaned from Parts 3 and 4 suggest This Time Is No Different, do the forces furthering this conclusion transcend the forces causing the current environment to be unique with respect to past environments?

Evolution of Jobs Since 1940

I aggregated the job categories from the data presented in Part 3 into large, broad sectors to see how the economy has changed between 1940 and 2013. The results are presented in Figure 10. 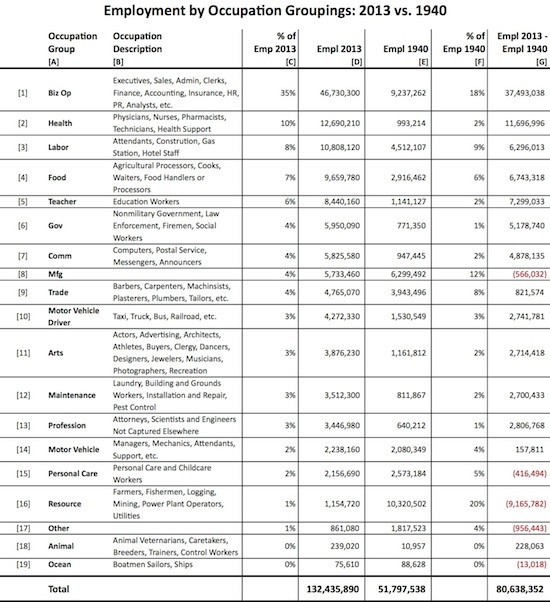 The comparisons show that by far the largest sector of the economy in terms of employment is private (i.e., non-government) industry (Biz Op). When you consider that most of the other categories aside from Biz Op also support private industry, what we see is that private business dominates the economy. Furthermore, since 1940 businesses have created enormous numbers of new jobs for workers with all levels of skills – from clerks, cashiers, attendants, maintenance workers, laborers, etc. at the lower end of the skill spectrum to executives and managers, analysts, scientists and engineers, etc. at the upper end of the skill spectrum – even as new technologies have been introduced and have had vast impacts throughout the economy.

Consider now that the nature of any given job requires a worker to perform a collection of tasks. As discussed in Part 4, Levy and Murnane partitioned workplace tasks into five broad categories, two of which automation can perform – routine manual tasks and routine cognitive tasks – and three of which automation cannot perform – non-routine manual tasks, solving unstructured problems, and working with new information. Brynjolfsson and McAfee provided a complementary list of skills that automation does not possess: creativity, large-frame pattern recognition, complex communications, sensorimotor skills. 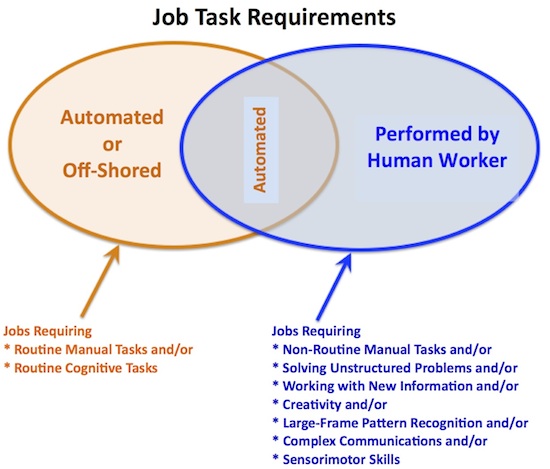 As technology improves, automation will be able to perform more types of tasks and thus start to chip away at (i.e., overtake) some of the tasks that are currently being performed by human workers.

The Evolving Nature of the Global Economy

Let’s step back for a moment and distinguish between jobs (occupations) and tasks or skills. As the economy evolves, new jobs will be created and old jobs will be destroyed. While we cannot be sure of the nature of the new jobs, we can be assured that the tasks or skills involved will comprise those specified by Levy and Murnane and Brynjolfsson and McAfee and illustrated in Figure 11. This is independent of the unique nature of the current global environment.

A second consideration is the nature of the evolution of markets with the evolution of new technologies. As technologies improve, it generally becomes less expensive to perform certain tasks (whether performed by automation or human workers). This has two potential impacts on the economy. The first possibility is that new technologies end up decreasing time requirements to perform certain tasks. In these cases, the new technologies may end up replacing some workers, but, more likely, they end up complementing existing workers. With this first possibility, either businesses end up with higher profits and/or consumers benefit from higher quality and/or lower prices. Regardless, while some workers may end up losing jobs, the standard of living for everyone generally increases. The other possibility is that new technologies end up decreasing costs to such an extent that whole new markets are opened up, thereby creating more jobs for both automation and human workers, both unskilled and skilled. Even as technologies improve, until new technologies are able to master inherently human tasks or skills (the blue tasks and skills in Figure 11), the efficiencies they generate will end up improving opportunities for both skilled and unskilled workers.

A third consideration is that as the developing world – the destination of significant portions of our off-shored jobs and the source of significant downward pressure on US wages – continues to develop, those economies (together with other more developed economies) will continue to create new jobs that will employ their local populations. This on-going development will affect the relative wages – wages in developing countries can only increase – and the other cost considerations that affect US companies’ decisions as to (i) whether or not to off-shore jobs, (ii) whether or not to automate jobs, and (iii) what to pay skilled and unskilled workers at home. More specifically, as developing countries continue to develop, wages of all levels of workers – and unskilled workers in particular – will increase, and so the standards of living will increase and start to approach those of more developed nations. Higher standards of living in developing countries will decrease much of the wage pressures on labor in the US generally – and unskilled labor in particular (though, of course, downward pressure on wages will remain when the threat of automation exists).

So what we have is that the global nature of the world’s economies suggests that competition will continue to increase the pace of new technology development, while prices in existing markets will continue to decrease and whole new markets will continue to appear (this is the premise of Brynjolfsson and McAfee’s The Second Machine Age). The pace of new technology adoption in different markets will certainly be delayed by such factors as consumer resistance or other market frictions (discussed in Part 2). However, technology will eventually prevail. In most cases, experience has shown that new technologies are more likely to complement humans and change the nature of their jobs than it is to replace workers entirely, though in some cases jobs will certainly disappear. This should continue to be true, unless or until new technologies are able to master inherently human tasks or skills. Given the continued discovery of new complexities in the human body – and especially in the brain – artificial intelligence is not expected to be able to master human skills anytime soon.

A combination of improvements in technology and increases in standards of living in developing nations should lead all workers globally, skilled and unskilled alike, to be better off. Mark P. Mills in “In The Future, Will Only Robots Celebrate Labor Day?” sums it all up beautifully:

Since 1890, we have seen profound technology changes; and we have come to take them for granted. It’s easy to forget that 1890 was literally, not figuratively, the horse-and-buggy era.

Such technological progress drove productivity, boosted the economy, and created jobs – and new kinds of jobs. No one in 1914, when half of America lived on farms, imagined the kinds of jobs that would exist by 1964 – for example, those associated with radio and television and electronic media. Similarly, no one in 1964 imagined the companies and jobs that would emerge by 2014 – for example, the $300B software industry employing multitudes. The U.S. Census didn’t even have a job category called “software” in 1964.

In order to ameliorate the inevitable disruption that progress brings, policymakers should get out of the guessing game and let the millions of varied private businesses take primary responsibility for both creating new jobs and re-training employees as needed. The government, for its part, should stick to what is knowable about the drivers of job growth. Job creation happens when economies boom as result of an expanding private sector, and especially with the proliferation of small businesses, start-ups and entrepreneurs. It should go without saying, but it does require saying, that the key thing government can do is to create conditions that accelerate private sector growth and new business formation.