The relationship between specific energy and energy density for various types of batteries are presented in Figure 1, which was taken from Justin Amirault, et. al. “The Electric Vehicle Battery Landscape: Opportunities and Challenges” 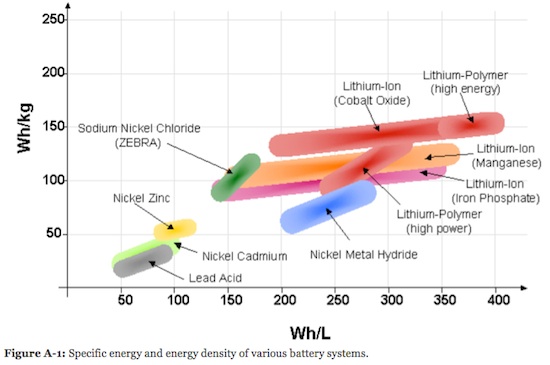 Toyota has this to say about its use of NiMH batteries in its hybrid vehicles:

The energy density of NiMH is more than double that of a lead acid battery but less than lithium ion batteries.

In 1997, Toyota developed a cylindrical NiMH battery that powered the Rav4EV as well as the e-com electric vehicle. Since 1997, Toyota has continually improved its NiMH batteries by reducing size, improving power density, lowering weight, improving the battery pack/case and lowering costs. In fact, the current NiMH battery, which powers the third generation Prius, costs ¼ that of the 1st generation.

Nickel-metal batteries are ideal for mass producing affordable conventional hybrid vehicles due to their low cost, high reliability and high durability. There are first-generation Prius batteries still on the road with over 200,000 miles and counting. That is why NiMH remains the battery of choice for Toyota’s conventional hybrid line up.

So NiMH batteries were used initially to develop hybrids, due to their relatively greater maturity and lower cost. At that time, Li-ion batteries were still in their infancy, they promised potentially greater energy capacity than NiMH, but they also had some serious disadvantages. There were two factors that led to the industry-wide adoption of Li-ion batteries as the battery family of choice for electric vehicles: (i) their potential for greater vehicle range, and (ii) patent access problems to NiMH battery technology.

… General Motors purchased the patent from Ovonics in 1994. Stanford R. Ovshinsky was the one who invented and patented the NiMH battery and founded Ovonic Battery Company in 1982. By the late 1990s, NiMH batteries were being used successfully in many fully electric vehicles…

In October 2000, GM sold the patent to Texaco and a week later Texaco was acquired by Chevron. Chevron’s Cobasys subsidiary that now has the rights to sell the NiMH batteries will in theory only provide these batteries to large OEM orders of 10,000+. Afterwards General Motors shut down production of their electric car production (the EV1) citing lack of battery availability as one of their chief obstacles, which is of course a situation GM created by selling the battery patents to an oil company. Cobasys/Chevron has effectively blocked the use of NiMH batteries by start-up EV manufacturers and has the ability to keep doing so until 2014 when the patents expire.