Now let’s take a look at the characteristics of the current offerings of electric vehicles across manufacturers, which are presented (above in Figure 2 and) in Figures 4 and 5. 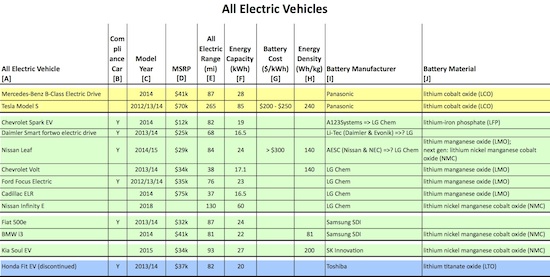 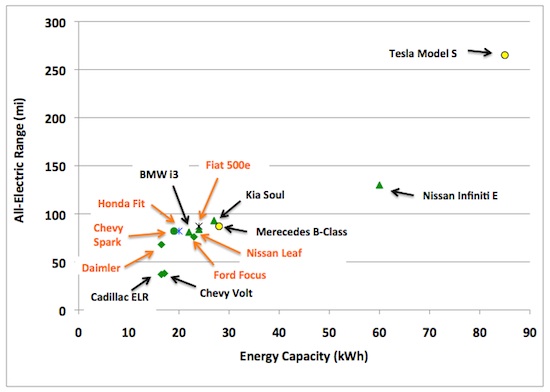 The information on current offerings by manufacture provide three indications in particular:

First, many of the current EV offerings are “compliance cars”.  These are vehicles sold  to comply with state mandates that auto manufacturers make zero-emissions vehicles (ZEV) a certain percentage of their annual sales. The compliance cars are the vehicles that appear in orange font in Figure 5. As Aaron Robinson, in his comparison for Car and Driver of the six compliance cars listed in Figure 4 so elegantly states,

The makers of the cars you see here were dragged kicking, screaming, and, in some cases, litigating into eligibility for this test. If truth were ever told, then these automakers would undoubtedly say that they’d rather not be here at all, thank you very much; that all of their accumulated business acumen and experience rages against the absurdity of a $37,000 Ford Focus with a 64-mile driving range.

Yet, here they are, with six compacts at similarly loony prices, and utility that amounts to, as senior online editor Ron Sessions says, “cars with one-gallon gas tanks that take five hours to fill.” Why do they even exist? Because government simply will not get off the industry’s back.

…most of these cars are available at heavily subsidized lease rates.

Third, the information indicates that the battery manufacturing industry is consolidating around a few key suppliers.

Toyota subsequently contracted with Tesla to have Tesla supply a limited number of batteries for Toyota’s Rav4 EV. When the agreement ended in 2014, Toyota discontinued the Rav4 EV and “In 2015, Toyota is to begin California sales of a hydrogen fuel cell sedan, another type of zero-emission vehicle that fulfills California’s ZEV mandate.”

Then Mercedes contracted with Tesla to have Tesla help Mercedes develop and manufacture parts of its new EV, the Mercedes B-Class.

Ford Focus Electric, Cadillac ELR and Nissan Infinity E all started with LG Chem as their source of battery supply for their EVs.

GM’s first electric vehicle, the Chevy Spark EV, started with A123Systems as its battery supplier. GM tested batteries from both A123Systems and LG Chem for the Chevy Volt and eventually chose the LG Chem battery. In May 2014, Chevy announced that it would be “centralizing  all it battery assembly and standardize on a single lithium-ion cell for its electric cars … the change helps us to better leverage our economies of scale.”

Nissan started out producing its own batteries for the Nissan Leaf but eventually switched to LG Chem to get “cheaper batteries.” Nissan continued to use LG Chem as is supplier for the Nissan Infinity E battery.

Like Nissan, Daimler started out producing its own batteries for the Smart fortwo, but will switch possibly to LG Chem as one of “a number of steps to improve profit margins.”

BMW partnered with Samsung in 2009 to access “state-of-the-art lithium-ion battery technology … [and] environmentally-friendly production and subsequent recovery of materials.”

For the Fiat 500E, “A collaboration between Bosch and Samsung (for the cells) supplies the batteries for the 500e, and Bosch also has a hand in the battery packaging, management software, electric motor, and regenerative braking system.”

Honda produced the Honda Fit EV, using Toshiba as its battery supplier, as a limited run edition to meet ZEV requirements. However Honda is exiting the EV market because it “sees hydrogen fuel cells as the future of personal mobility, and not battery-electric vehicles.”

Kia jointly developed the battery for its Soul EV with SK Innovation, who continues on as its battery supplier.

Go to Part 5: The Costs of Manufacturing Li-ion Batteries