In Part 1 we learned that the essential factors at issue when considering batteries for use in powering electric vehicles include (i) the amount of energy that can be stored, (ii) longevity, (iii) cost, and (iv) safety.

In Part 2 we learned that (i) theearliest EVs (hybrids) used NiMH batteries, due to their greater safety, longer life, and lower cost; and (ii) two factors led to the industry-wide adoption of Li-ion batteries as the battery family of choice for electric vehicles: (a) their potential for greater vehicle range, and (b) patent access problems to NiMH battery technology.

In Part 3 we learned that (i) current EVs use Li-ion batteries because they offer the greatest potential energy capacity and density; (ii) Li-ion batteries include a family of batteries composed of different materials; (iii) the cost of the battery is the largest cost component of electric vehicles; of the battery costs, the most significant contributors are the costs of the raw materials, which vary greatly in price; and (iv) different material constructions of Li-ion batteries generate differences in battery performance, where the ranking of battery potential from least to greatest is (a) LCO (1st gen) and LMO (2nd gen), (b) LFP (3rd gen) and NMC (4th gen), and (c) NCA and LTO.

In Part 4 we learned that information on current EV offerings provide three indications: (i) many of the current EV offerings are “compliance cars”; (ii) the performance of most EVs is clustered around similar levels of energy capacity and range; and (iii) the battery manufacturing industry is consolidating around a few key suppliers.

Putting it all together yields the following insights.

EV technology is generally in its early stages of development.

There have been vast improvements in battery performance over the past few years. However, there is still a ways to go before batteries will achieve levels of performance required for mainstream adoption. In particular, batteries (i) are still too expensive to manufacture, (ii) don’t provide enough range, (iii) suffer from short battery lives, and (iv) provide safety risks.

Most of the EVs currently on the market are compliance cars.

They are there because large-volume auto manufacturers were forced to comply with state mandates requiring the sale of zero-emissions vehicles (ZEVs). The performance of these compliance cars leave a lot to be desired. Yet, they have been adopted by niche buyers due to a combination of (i) heavily subsidized purchase prices, and (ii) a desire by certain consumers (“uber-greens”) to be eco-friendly.

Tesla has managed to outperform other vehicle suppliers by adopting a more mature technology for use in its EV batteries.

Tesla’s EVs employ lithium cobalt batteries, which have been widely used in consumer electronics (laptops, cell phones, cameras, etc.). LCO batteries provide high potential energy capacity and density. And because of their relatively mature state, Tesla has already been able to achieve much (most?) of the high potential. In other words, Tesla’s current state of EV performance with respect to power and range will not be able to be improved upon much.  At the same time, high cobalt prices relative to the prices of metals used in alternative forms of lithium-ion batteries suggest that Tesla’s battery prices will be expensive relative to the prices of other EV suppliers’ batteries. Finally, due to the nature of Lithium-cobalt batteries relative to that of other batteries in the lithium-ion family, Tesla’s batteries will suffer from much shorter battery life. As Battery Expert Sven Bauer says,

…Tesla has a battery that works. But in comparison with this, the battery in the BMW i3 is a quantum leap. BMW has an industrially produced, advanced battery with cells specifically tailored for the job, as opposed to a laptop cell that has been modified for an automotive application. They’re miles apart.

Tesla will have a problem, because customers will hardly be prepared – after only five or six years – to fork out around 20,000 euros for a new battery…

Batteries for electric vehicles will end up being manufactured by a few key suppliers.

The few battery manufacturers that survive will be those who are able to (i) achieve higher production runs (i.e., utilize more factory capacity), (ii) achieve higher manufacturing yields, and (iii) benefit from volume purchases of raw materials.

The materials from which a battery is constructed, together with the packaging of the battery, and the software systems that manage its use, all contribute to the cost, quality, safety, and longevity of the battery’s performance. EV battery systems are still in the early stages of development, and so far, achieved performances have fallen significantly short of their potentials. As such, they have a lot of room for performance improvements. In particular, EV manufacturers still have plenty of room for improvement in battery manufacturing techniques and in battery performance systems.

For example, Justin Amirault, et. al., in “The Electric Vehicle Battery Landscape: Opportunities and Challenges,”offer some avenues for improvement in battery performance:

[S]pecific power depends strongly on factors like electrode thickness and the size of electrode particles, which may be controlled in the manufacturing process. Manufacturers have developed sophisticated proprietary manufacturing techniques, such as coating electrode particles with other materials that are more conductive, in order to increase the power density of their batteries.

Battery Management System(BMS) is a combination of sensors, controller, communication, and computation hardware with software algorithms designed to decide the maximum charge/discharge current and duration from the estimation of SOC and SOH of the battery pack….The safety, durability, and performance of batteries are highly dependent on how they are charged or discharged. Abuse of a battery can significantly reduce its life and can be dangerous. A current BMS includes both charging and discharging control on-board.

Thermal Management System(TMS) is designed to protect the battery pack from overheating and to extend its calendar life. Simple forced-air cooling TMS is adopted for the NiMH battery, while more sophisticated and powerful liquid- cooling is required by most of the Li-ion batteries in EV applications. 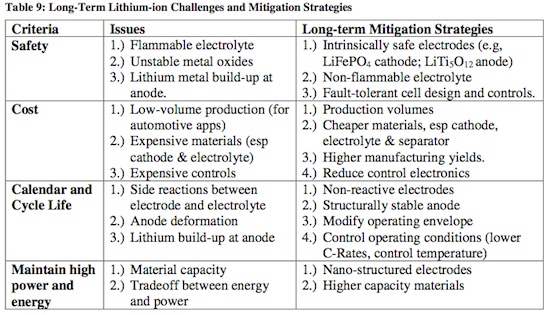 We have established that the technology being used by Tesla (LCO batteries) is relatively mature as compared with the newer technologies being used by the other EV manufacturers (LMO, LFP, and NMC). As such, it is reasonable to assume that the performance of the other manufacturers’ EVs will eventually approach, converge with, and possibly even surpass that of Tesla. In other words, the cluster of EV performance in the lower-left-hand portion of the graph in Figure 5 should shift over time toward the upper-right-hand-corner of the graph near Tesla.

Widespread adoption of EVs will continue to depend on their performance relative to ICE vehicles.

In “Battery Technology Charges Ahead,” Russell Hensley, John Newman, and Matt Rogers provide an excellent illustration of how EV battery prices and the price of gas determine the desirability of EVs relative to ICEs (see Figure 9). 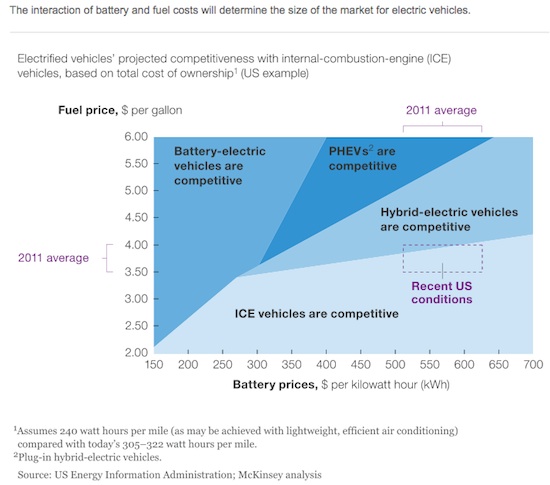 However, as minimum requirements continue to increase in the auto industry, ICE vehicles continue to improve in their gas efficiency (mpg). And as ICE mpg increase, it becomes more difficult for EVs to compete. In terms of Figure 9, as ICE mpg increase, the left hand axis (Fuel Price) shifts down, so that EVs are only competitive with ICEs when gas prices are higher.

The other big barrier to adoption of all-electric vehicles is the lack of charging stations.  Until the infrastructure supporting access to charging stations becomes readily available, adoption of EVs will not pass the early adopters’ stage. As I concluded in an earlier analysis of electric vehicles, (Electric Vehicles and Social Welfare), in the near term, then, those interested in being eco-friendly will most likely continue to adopt hybrids, rather than EVs:

…[T]he adoption of Hybrid Vehicles has gained some momentum, but adoption of Electric Vehicles is still in its infancy.

Society will thus continue to benefit from the reduction in emissions associated with the continued adoption of hybrids without having to invest in any new infrastructure.