How Do You Change the Environment?

Mapping Out a Game

How to Determine Which Choice Will Prevail

The 7 attendees were seated around a large table. Before the talk began, people introduced themselves and gave a short description of their background. The audience included gamers and software and systems people. Several people commented that they were interested in applying game theory to “negotiations” with co-workers, that is to figure out how to better get things done. Others were interested in applying game theory to gaming.

I started my talk with a description of the introduction of the HDTV technology into the market in the 1990s. At that time, when digital technology was introduced, TV programs were being broadcast in analog. The government wanted the transition from analog to digital to proceed quickly, because the government planned to use the analog spectrum for emergency services and other government services.

So what we have is

Users wouldn’t adopt HDTV because there was too little programming available.

Broadcasters wouldn’t make programming available because there were too few users to access it.

This is a classic chicken-and-egg problem that comes up often when new technologies are introduced into the marketplace, and it inhibits timely adoption.

More formally, a game consists of

•  A set of actions available to each of the players:

°  HDTV Manufacturers choose how many HDTVs to manufacture and what price to charge each period;

°  Program Broadcasters choose how much of their programming to switch over to digital each period; and

°  HDTV Viewers: choose if and when to adopt (purchase) HDTVs.

•  A set of payoffs for each player, where each player’s payoff is a function of the actions taken by the other players:

°  HDTV Manufacturers: Profits are increasing in (i) the amount of HDTV programming made available by Broadcasters and (ii) the number of Viewers who have switched over to HDTV;

°  Program Broadcasters: Profits are increasing in (i) the number of Viewers who adopt (purchase) HDTVs each period, which is increasing in (ii) the amount of programming made available in digital broadcast; and

°  Viewers: Viewers switch over to HDTV when (i) the price of HDTVs is low enough and (ii) there is enough digital programming available.

1.  Perspectives Contributing to the Adoption Process

The adoption process is influenced by a combination of factors provided by three distinct sets of perspectives:

•  Marketing: When considering how to motivate players to adopt new technologies sooner rather than later, the marketing perspective considers the price of the new technology, together with the amount and type of advertising as choice variables to use to influence adopters’ decisions.

•  Sociological: When considering if and when players will adopt a new technology, the sociological perspective considers the inter-relationships among people in society; cultural norms, attitudes and beliefs; etc., to determine whether or not the new technology is consistent with people’s beliefs and if so, how to use such beliefs and inter-relationships to influence the pace of adoption.

Direct Network Effects (DNE): A system exhibits DNE when technology users are able to interact or otherwise share resources with other users. For example, telephones and fax machine exhibit DNE because when there are more users with telephones or fax machines, then the technology is more valuable to any given user, because he is able to contact more other users. 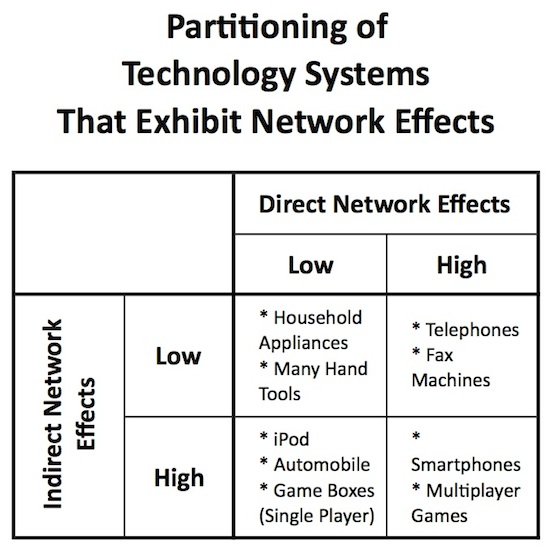 When considering the games formed by technology systems, the strategies associated with each system will be different, depending upon which of the four types of network effects combinations the system exhibits, (Low, Low), (Low, High), (High, Low), (High, High).

How Do You Change the Environment?

Much time was spent emphasizing that if a player doesn’t like the probable outcome that will result from a game being played in particular environment, then it is up to the player, say Player A, to change the environment to better suit him. In other words, Player A has to change the environment so that the actions that other players are led to take in the new environment are precisely those actions that benefit Player A. The only way Player A can do this is if he truly understands what it is that motivates the other players.

As a specific example, a player’s profit or utility function will often look like this:

– Costs of Switching from Old to New Technology

To the extent that New System Suppliers can decrease the switching costs to Users associated with adopting the new system, they will be able to speed the rate of new system adoption by Users.

Mapping Out a Game

One attendee asked how you go about mapping out a game. Do you start with a particular formulation and mold the Game into that formulation?

I used the example of Uber to illustrate how I go about mapping out a game.

Figure 2 is the diagram I used for my analysis of peer-to-peer (P2P) platform systems. 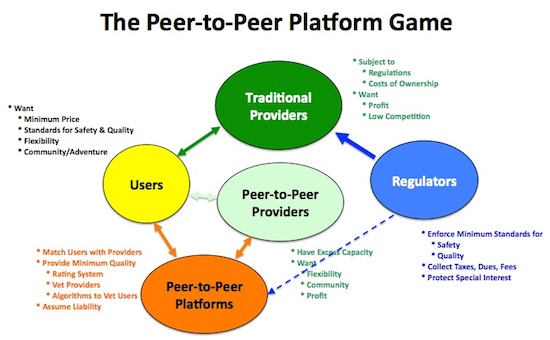 I started with Uber as the P2P Platform (orange node).

Next, I linked in Uber Drivers (light green node) and Users (yellow node).

After that, I linked in Taxi Drivers (dark green node) as the existing competitors.

I finished by adding in the Regulators (blue node), who currently regulate Taxi Drivers.

I also noted that when reading about the industry, I discovered that Uber Users seek a sense of community, that is, they seek a personal connection with Uber Drivers.  Knowing this would enable Uber and/or Uber Drivers to provide (emphasize) such an environment for Users, thereby speeding the rate of adoption of the Uber platform.

How to Determine Which Choice Will Prevail

One attendee was kind enough to demonstrate how he uses his own method to come to an unbiased conclusion as to which choice will prevail, when faced with a number of possibilities. He used my possibilities for my next Meetup location as an example. I have to choose between holding my next Meetup session in either (i) a community center, (ii) a hotel, or (iii) at some local startup office.

Here’s how the attendee explained his algortithm (illustrated in Figure 3):

Start by listing the choice of venues, together with the important attributes of each (see rows and columns of Figure 3).

Second, for each venue, rate the desirability of each of the attributes it has to offer (see numbers in the inner matrix of Figure 3).

Third, weight each attribute in terms of importance (see row of numbers above attributes in Figure 3).

Fourth, weight each venue in terms of desirability (see column of numbers to the left of venues in Figure 3)

Finally, take a weighted total for each of the venues across each of the attributes (see column [F] in Figure 3).

So, an unbiased analsis of the possible venues I have to choose from for my next Meetup, together with their respective attributes, would lead me to choose a community center for my next venue. 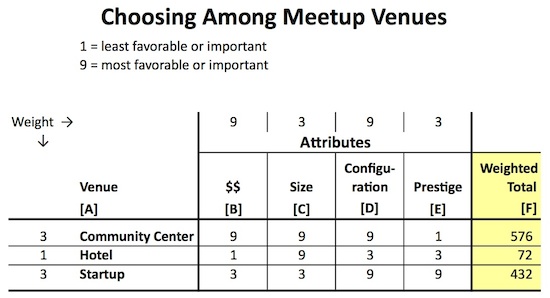