Managing the Global Commons, with a Focus on Outer Space, Part 1

This analysis, Managing the Global Commons, with an Emphasis on Outer Space, has three parts:

* Part 1: Description of the Commons

Part 1: Description of The Commons

Definition of The Commons

Wikipedia defines the commons as

…[T]he cultural and natural resources accessible to all members of a society, including natural materials such as air, water, and a habitable earth. These resources are held in common, not owned privately.

And it defines global commons as (emphasis mine)

…[I]nternational, supranational, and global resource domains in which common-pool resources are found. Global commons include the earth's shared natural resources, such as the deep oceans, the atmosphere, outer space and the Northern and Southern polar regions, the Antarctic in particular. Cyberspace may also meet the definition of a global commons.

Tragedy of the commons is a concept originally described in 1833 by British economist William Forster Lloyd and later popularized in a 1968 Science magazine article with the same title written by ecologist Garret Hardin. Hardin describes the issue in terms of herdsmen who graze their cattle in an open pasture. For each new animal that a herder adds to his herd, he increases his own benefits by the associated proceeds he receives from the sale of that additional cow, while he distributes the associated costs of overgrazing across all herdsmen. Each herder thus enjoys the full benefits of increases to his herd, while sharing the costs will his fellow herdsmen.

Adding together the component partial utilities [benefits and costs associated with the addition of each new cow], the rational herdsman concludes that the only sensible course for him to pursue is to add another animal to his herd. And another; and another … But this is the conclusion reached by each and every rational herdsman sharing a commons. Therein is the tragedy. Each man is locked into a system that compels him to increase his herd without limit – in a world that is limited. Ruin is the destination toward which all men rush, each pursuing his own best interest in a society that believes in the freedom of the commons. Freedom in a commons brings ruin to all.

Graphical Depiction of The Commons

Graphically, the situation of the commons is depicted in Figures 1 and 2. 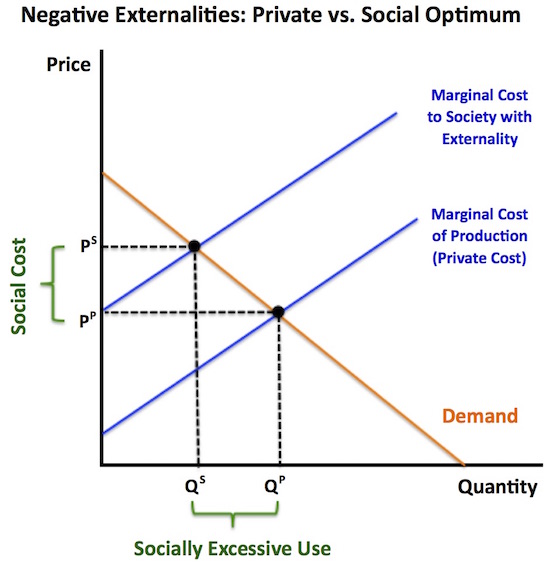 Figure 1 compares the private and social eqilibria in the presence of a negative externality. An individual will fail to consider the social cost associated with his use of the commons, which will lead him to overconsume by an amount equal to QP – QS, incurring a private costs of PP, while imposing an additional cost on society of PS – PP. 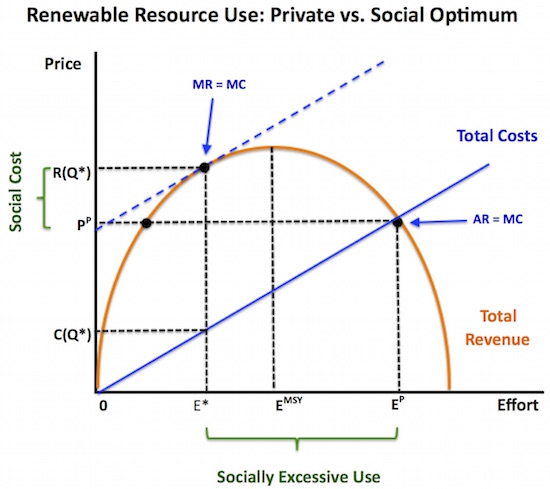 Figure 2 compares the private and social equilibria in the market for a renewable resource. EMSY is the amount of effort associated with the maximum sustainable yield, beyond which the stock of the resource becomes permanently depleted. An individual will fail to consider the social cost associated with his extraction of the renewable resource. This will lead him to take too much effort by an amount equal to EP – E*, incurring a private costs of PP, while imposing an additional cost on society of R(Q*) – PP, thereby leaving the stock of the renewable resource at an unsustainable level.

As Figures 1 and 2 illustrate, in a free market individuals are led to overuse the global commons, subjecting the commons to social costs associated with congestion, pollution, and excessive exploitation. Excessive pollution and exploitation can lead to exhaustion of resources (in the case of natural resources), extinction of species (in the case of flora and fauna), and prevention of continued access (in the case of rivers and oceans, air, and outer space).

In “Design principles for global commons: natural resources and emerging technologies”, Paul C. Stern presents two sets of tensions associated with use of the commons, private versus social and present versus future:

… the two essential conflicts in a commons – between individual and collective well-being and between short-term resource exploitation and long-term sustainability.

The CHM principle was the first codification of a property rights regime that transcended national sovereignty. Instead, the CHM dealt directly with humanity, including its rights and development as a whole. The 1967 Outer Space Treaty (OST), passed shortly after the Cuban Missile Crisis, first enumerated this principle. Resulting from a brief alignment of political interests, this accord curtailed national sovereignty in the name of international peace. The OST ensured that the scientific discoveries of the space age belonged to all of humanity. This, and not regulating private enterprise or ensuring the expansion of territorial sovereignty, was the crux of the OST.

There are five specific tenets associated with the designation of a commons as CHM, as Shackelford specifies

Although no universal definition exists, most conceptions of the CHM [Common Heritage of Mankind] share five primary points.

First, there can be no private or public appropriation of the commons.

Second, representatives from all nations must manage resources since a commons area is considered to belong to everyone.

Third, all nations must actively share in the benefits acquired from exploitation of the resources from the common heritage region.

Fourth, there can be no weaponry or military installations established in commons areas.

Fifth, the commons should be preserved for the benefit of future generations.

Shackelford notes that the specifications of the CHM address the disadvantage that less developed nations face vis-à-vis developed nations with respect to their ability (or, more precisely, their lack thereof) to explore and exploit the global commons:

The CHM principle is a product of a political desire for more equitable resource distribution. This includes assisting nations with inadequate resource endowments to compete effectively.

Shackelford also makes an astute observation by noting that there are few tensions associated with the commons, unless or until technologies become available that enable men to exploit them. The designation of inaccessible commons as CHM serves as a “temporary placeholder” until technology develops to make them accessible:

Communal sovereignty may be seen as a temporary placeholder that exists until technology enables occupation of property making it worthwhile for states to assert national sovereignty.

Go to Part 2: Methods of Managing the Commons