The establishment of the general-purpose credit card system (in the US) is, for all intents and purposes, the basis upon which the mobile payment systems game is based.  The use of credit to pay for purchases of goods and services actually goes way back – nearly 3,000 years ago to ancient Babylon and Egypt. However, the use of general-purpose credit cards (as opposed to particular store credit cards) in the US started in 1950. The players in this initial credit card game included (i) the Banks or Credit Card Companies who issued the cards, (ii) Users who used credit cards issued by the Credit Card Companies to purchase goods and services from Merchants, and (iii) Merchants who accepted credit cards from Users as a form of payment for goods and services.  Over the next 60 years or so, the game between these three sets of players remained essentially unchanged. 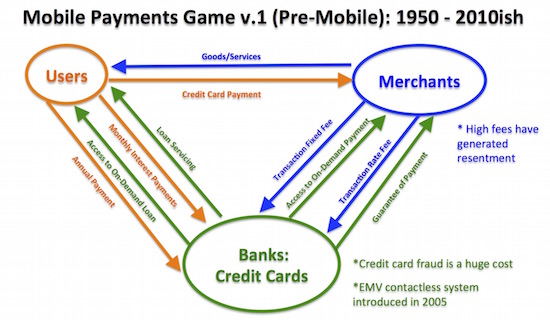 In the initial game (depicted in Figure 1), the banks established the credit card system, which provided Users and Merchants with greater access to the ability to transact in the marketplace. More specifically, the establishment of the credit card system enabled Users to purchase goods and services from Merchants using an on-demand payment system, without the need for Users to carry cash.

The first general purpose credit card – Diner’s Club – was established in 1950, where

The fees that Credit Card Companies collect from Users and Merchants (could be said to) cover the following services:

•  Credit cards enable Users to make on-demand loans from Credit Card Companies. Users enjoy the convenience of being able to pay for goods and services anywhere at any time, without having to carry cash. The annual fees paid by Users cover the on-demand loan service provided by the Credit Card Companies, while the monthly interest rate fees cover the costs of servicing the loans.

•  Credit cards provide greater accessibility to Merchants’ goods and services by enabling Users to purchase those goods and services anywhere at any time, without the need to carry cash. The fixed transaction fees Merchants pay the Credit Card Companies provide Merchants with access to the ability to receive on-demand payments from Users, while the interest rate fees cover the guarantee of payment to Merchants on behalf of Users by the Credit Card Companies.

The game depicted in Figure 1 remained largely unchanged until about 2010, with the exception of a few relatively minor enhancements. In particular, loyalty cards were added to the mix in the 1980s:

Airlines and hotels kicked off modern rewards programs in the early 1980’s. American Airlines introduced the AAdvantage program in 1981 to retain the airline’s most loyal customers. Credit card companies saw the model working in the travel industry and got on board. The AT&T Universal Card was the first credit card to offer rewards, providing credits on every purchase that could be applied to the cardholder’s phone bill.

Debit cards became more popular in the 1990s (essentially replacing much of the use of checks) as a means of avoiding interest payments. However, it is still the same Credit Card Companies operating the debit card system.

Would-be competitors to the major Credit Card Companies (American Express, Visa, MasterCard, and Discover) (e.g., gas cards, department store cards, etc.) have nibbled around the edges of the market, but for all intents and purposes, the major Credit Card Companies have managed to successfully retain the lion’s share of the credit payments portion of the market for consumer goods and services. Credit and debit card purchases currently account for about a third of US consumer spending (see Figure 2), which, in turn, accounts for about 69% of US GDP. 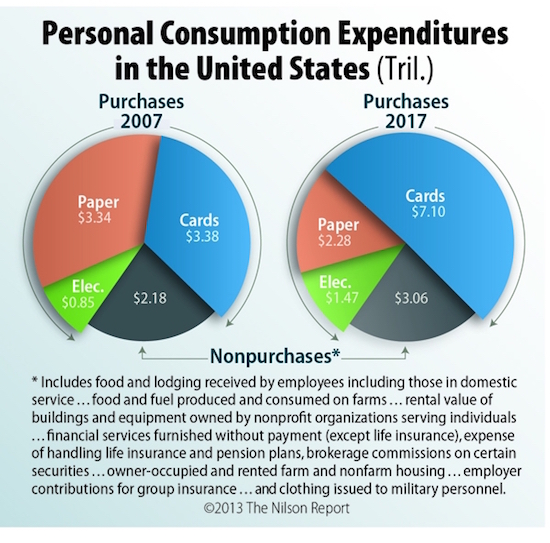 As the volume of credit card transactions has grown, so too has the amount of credit card fraud. The Credit Card Companies learned early on that holding Users liable for fraud committed on their accounts was a sure-fire way of curtailing credit card use by Users. As such, the long-instituted policy by the Credit Card Companies has been to accept essentially all the liability associated with fraud committed on Users accounts, so as to encourage Users to use their credit cards as freely as possible. 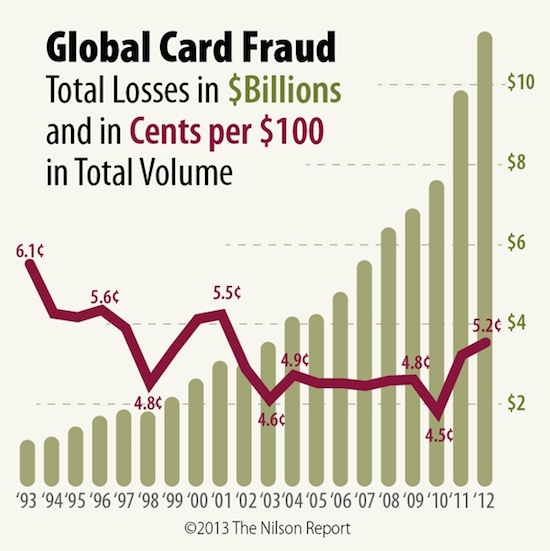 During the mid-late 1990s, the Credit Card Companies developed a new credit card standard, EMV, to replace the traditional magnetic stripe “swipe” technology. This new technology improves upon the previous technology by (i) improving security, and (ii) enabling contactless payments. The EMV system was officially adopted in Europe in 2005, when the Credit Card Companies shifted liability for fraud to any merchant who had not adopted the EMV technology. The US is basically the only country globally that has not yet adopted the EMV system. For a full discussion of why the US has not adopted EMV, see my analysis, “Playing the Visa EMV Game.”

High Fees Have Generated Resentment from Users and Merchants

Since its inception in 1950, the payment system established by Credit Card Companies has grown enormously in size, due to the tremendous convenience and ease of use they provide. With their increasing degree of entrenchment in the economy, so too has grown the power of Credit Card Companies to charge increasingly high rates to Users for servicing loans and to Merchants for guaranteeing Users’ payments.

In 2012, the retail merchants formed their own consortium, MCX, to develop a payment system with the purpose of bypassing the credit card system (more on MCX later). Will Hack, in “MCX defends business model, talks email hack,” describes how it was the “merchants’ antipathy to the card network” that served as the impetus for the retailers to finally try to create a payment system that could circumvent the system established by the Credit Card Companies.

“The purpose of MCX has always been about merchants' antipathy to the card networks," James Wester, research director of global payments for IDC Financial Insights, told Mobile Payments Today in an email. "They have been on a decades-long crusade to lower costs and level the playing field with companies they feel have arbitrary, opaque pricing. That fight has included lawsuits and regulations and has been extremely hard fought by both sides."

The payment system being developed by MCX will be discussed in more detail later in the analysis.