In Part 1 of this analysis on Winner-Take-All (WTA) markets, I described the forces contributing to the increasing incidence of WTA markets that we've been seeing over the past few decades in global economies. More specifically, I described two, distinct phenomena that have been enabling fewer individuals to extract larger portions of wealth from global markets: (i) an intra-market shift in leverage that has been enabling fewer individuals to extract more wealth from certain types of markets; and (ii)  an an inter-market shift causing increases in the size of markets, due to the erosion of barriers that had previously prevented regional markets from consolidating globally.

In this part of the analysis, Part 2, I provide some examples of WTA markets, together with ways of mitigating negative effects in these markets.

In the last part of the analysis, Part 3, I discuss some strategic issues associated with WTA markets.

This section provides some examples of Winner-Take-All markets, together with indications of the specific forces (described in the previous two sections) that have contributed to the formation of WTA phenomena in these markets.

While entertainment markets have generally always been WTA markets at least to some extent, they have become larger now than they were in the past. This is due to a combination of (i) decreases in distribution and communication costs, which have increased the size of markets (shifted them from regional to global), (ii) network economies and positive feedback effects, which have enhanced the ultimate potential of artists in global markets, and (iii) the increasing leverage of superstars, which have enabled them to extract a greater portion of the value that they create.

Figure 3 shows that the vast majority of smartphones run on either Google or Apple operating systems, and Figure 4 shows that a handful of vendors account for the majority of PC sales. 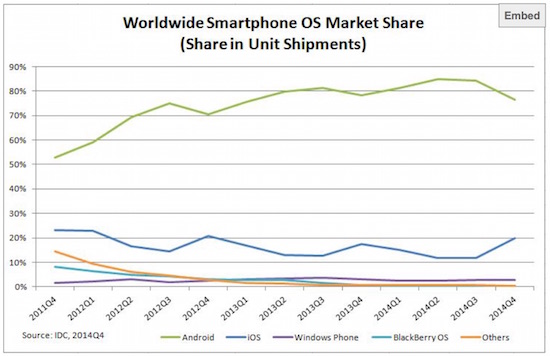 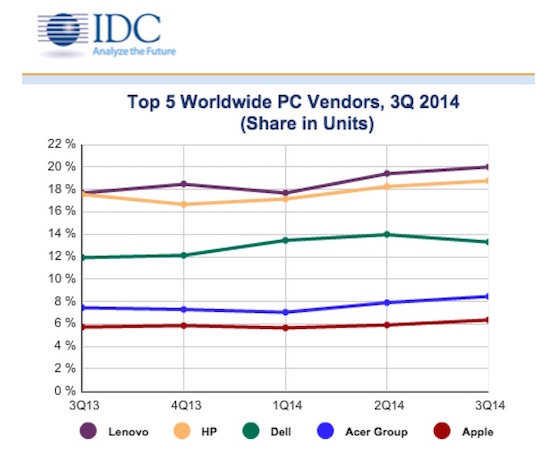 Facebook and YouTube account for over two-thirds of the social media market (see Figure 5). The strong concentration of social media is a reflection of the strong impact of network and feedback effects in these markets. 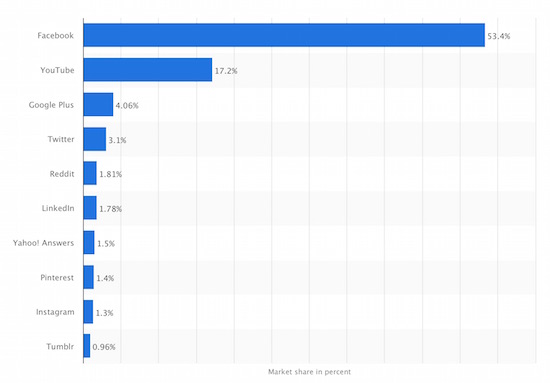 In the US, ecommerce is concentrated among a handful of websites, as seen in Figure 6. As with social media, the concentration of ecommerce is also due to the strong impact that network and feedback effects play, especially in the case of 2-sided (platform) markets (e.g., Amazon, eBay, and Etsy). 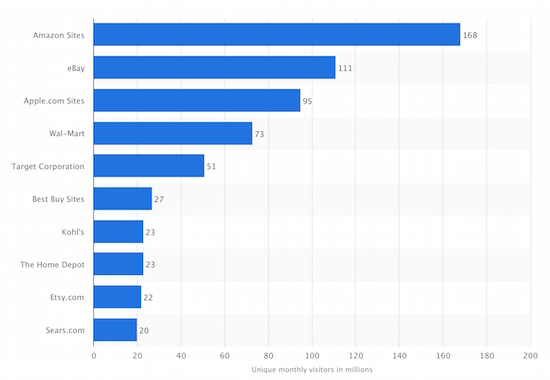 Figure 7 indicates that CEOs have been capturing an increasing portion of the value created by businesses, at the expense of both other employees and shareholders. This phenomenon is due to (i) the shifts in public policy mentioned above; together with (ii) the erosion of inter-industry boundaries, which have enabled CEOs to expand their employment opportunities across industries, rather than being confined to single industries; and (iii) the amplifying effects of benchmarking CEO salaries across companies. 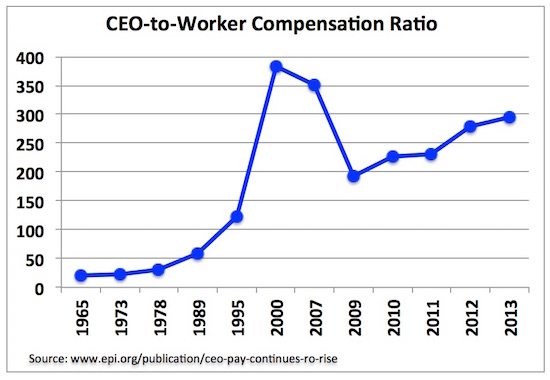 Figures 8A and 8B show that a handful of colleges account for the majority of endowments (column [B]) and the schools with the highest endowments are also the most competitive in terms of acceptance rates (column [C]).

Figure 9 shows that the majority of citations of journal articles (i.e., peer-recognition of significant research contributions) tend to be concentrated among a few researchers, who tend to be professors at the highly ranked universities.

A large part of the strength of WTA effects in education markets is due to positive feedback effects (people from the best schools are subsequently provided with the best opportunities), together with cognitive limits (association with elite schools serves as a signal of high quality). 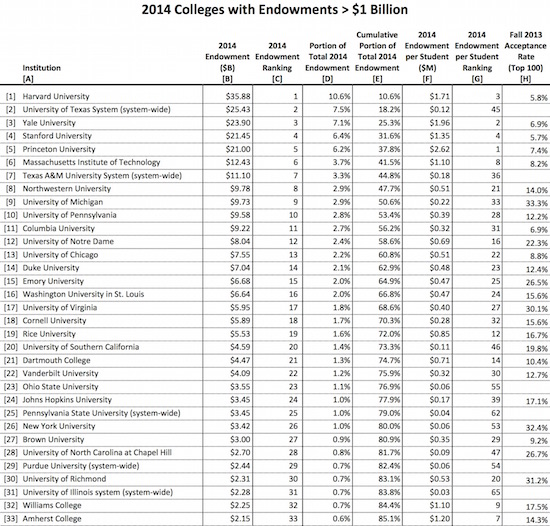 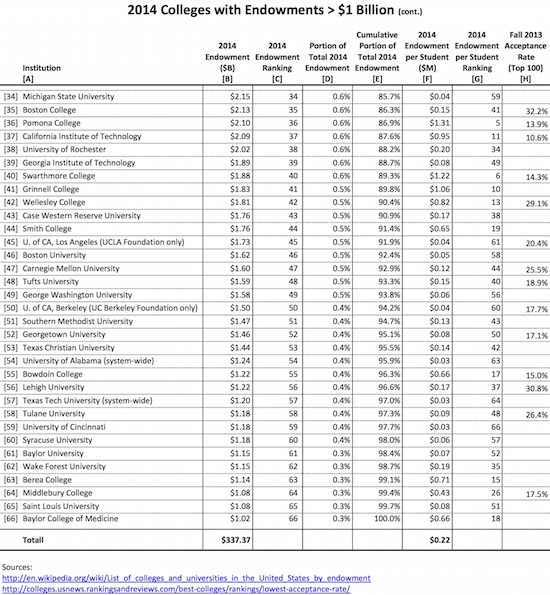 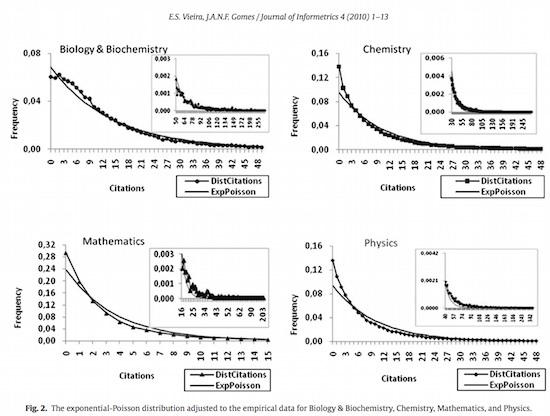 Winner-Take-All markets often lead to wasteful competition (from a social perspective) by market participants who compete for the top prizes. In other words, society would be better served by having some of the resources redirected away from competition for top prizes in WTA markets and into more productive activities in other markets. Frank and Cook refer to this wasteful competition as “Arms Control Races,” and they provide examples of wasteful competition, including:

•  Excess Entry, that is, too many players competing in the market for the top prize;

•  Excess Expenditures of Resources by competitors in attempts to top rivals;

•  Performance Enhancement, which may give an individual a temporary advantage over competitors, but lead to social waste if all rivals respond by adopting those same methods;

•  Sabotage or other Illegal Behavior conducted to gain an edge on competitors;

•  Excess Advertising and Promotion; and

… [A]s competition increases, and profit margins decrease, firms have greater incentive to engage in unethical behavior that improves their costs (relative to competitors). Other firms, given the cost disadvantage, face competitive pressure to follow; such competition collectively leaves the firms and society worse off…

… [A]nother race to the bottom, namely when consumers pressure an intermediary to shade its findings to the consumers’ liking, but society’s overall detriment. As competition increases in the intermediary’s market, more will be willing to distort their findings and reduce accuracy, which may appeal to the individual customers, but harms society overall.

•  Lobbying for regulations that provide one company with a competitive advantage over its competitors.

Status competition has confounded consumers and economists for centuries. John Maynard Keynes, for example, assumed that with greater productivity and higher living standards, people in developed economies would work only fifteen hours per week. He identified two classes of needs—‘those needs which are absolute in the sense that we feel them whatever the situation of our fellow human beings may be, and those which are relative in the sense that we feel them only if their satisfaction lifts us above, makes us feel superior to, our fellows.’ As its economy developed, Keynes predicted, society would deemphasize the importance of relative needs.

So why aren’t many Americans, Europeans, and Asians today working 15 or 20 hours per week? Keynes correctly predicted the rise in productivity and real living standards. But he ‘underestimated the appeal of materialism’.

Mitigation of Effects of “Arms Control Races” in WTA Markets

Protective equipment requirements are another common positional arms control agreement. Economist Thomas Schelling has observed that when hockey players are left to decide for themselves, they generally play without helmets. And yet when given a chance to vote in a secret ballot, most favor a rule that mandates helmet wearing. The apparent contradiction is rooted in the logic of the positional arms race. Going without a helmet creates a marginal competitive advantage—perhaps by enabling players to see and hear a little better, or perhaps by making it easier to intimidate their opponents psychologically. But when all athletes play without helmets, the competitive advantage each seeks is neutralized. One team wins and another loses, whether no players wear helmets or all wear them. Helmets reduce risk of serious injury, and hence the attraction of helmet rules.

In these cases, market members can jointly agree to abide by certain rules that help align individuals’ incentives with those of the collective market. Frank and Cook refer to these types of agreements as “Positional Arms Control Agreements”, or types of “agreements, norms, and rules that have been developed to curtail” inefficient or wasteful competition.

Examples of Positional Arms Control Agreements provided by Frank and Cook include the following.

•  To avoid runaway spending on athletics teams, teams have agreed to limit the number of people allowed on each team.

•  To avoid having the best professional sports teams earn a disproportionate share of the revenues generated from games, teams have agreed to pool gate and TV revenues and divide them up equally among the teams.

•  To avoid unpreferable methods of personal enhancement, teams have agreed to have their players tested for drug use.

•  To avoid preventable injuries, teams have agreed to use protective equipment.

•  To avoid excess competition on certain elements of quality, teams have agreed to eligibility requirements for players.

•  To avoid excess competition, businesses or workers have agreed to production quotas.

•  To avoid excess competition on status through expenditures on clothing, schools have agreed to require students to wear uniforms.

•  To avoid excess spending on legal costs, businesses have imposed requirements on employees to use arbitration, rather than lawsuits, to resolve legal matters.

•  To avoid preventable injuries, businesses are required to abide by OSHA requirements.

•  To avoid having people retire without enough savings to support themselves, the government has established the Social Security system.

•  To avoid excess competition in elections, government has imposed spending caps on campaigns.