One of the biggest issues currently in the media is the subject of online adblocking. Adblocking involves the installation and use by Internet Users of adblocking software on their web browsers, so as to prevent advertisements from appearing on websites. Many are predicting that adblocking software will seriously hamper the provision of content on the Internet by preventing the use of the highly popular, ad-based, Internet business model. For example, recent headlines include:

“AdBlock Plus won’t bring down the web, but the bell is tolling for current business models”

“Should ad blockers be legal?”

A recent announcement by Apple further heightened the controversy over the use of adblocking software. In early June the Company announced that it would provide adblocking software for the next version of its Safari browser for use on mobile devices (see for example Joshua Benton, “A blow for mobile advertising: The next version of Safari will let users block ads on iPhones and iPads”).

What’s even more interesting is that an entire ecosystem is popping up around the use of adblock software, for example as different players introduce new adblocking software for Users and new Service Providers introduce analytics to help Content Providers understand the extent of adblocking use by Users.

Trends in US Online Ad Revenues

This first section describes recent trends in Internet advertising. It’s important to understand what’s been going on in this area, since these activities serve as a backdrop for the analysis of the Adblocking Game.

Figures 1 – 5 were taken from the “IAB/PwC Internet Ad Revenue Report, FY 2014,” which reports advertising statistics for the US through 2014. 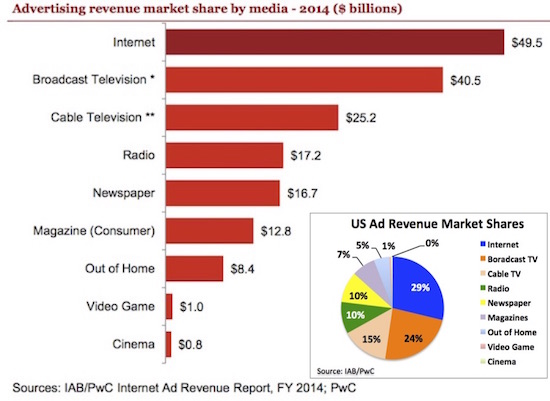 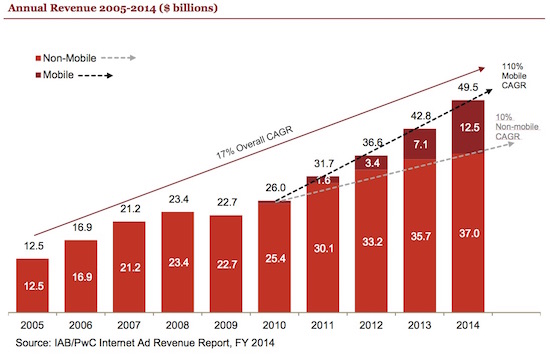 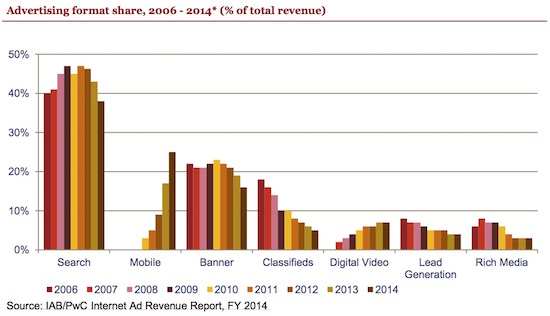 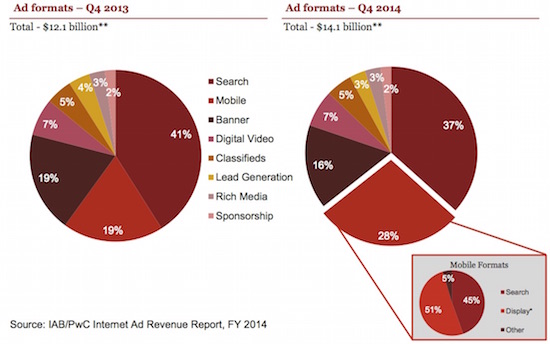 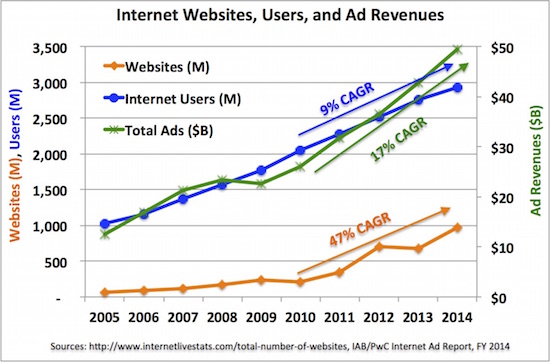 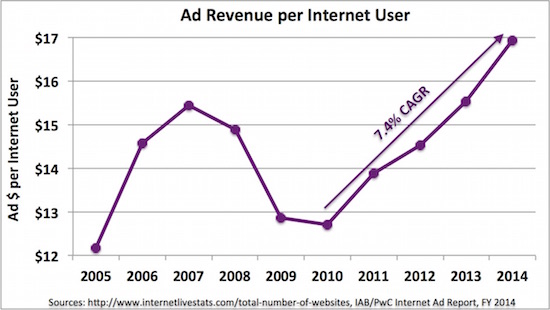 As an aside, it originally occurred to me to also look at trends in advertising revenues per website as an alternative indicator of how Internet advertising has changed over time. Based on the information presented in Figure 5, one can easily deduce that ad revenues per website have been decreasing over time, since growth in the number of websites has far outpaced growth in ad revenues. However, one must also consider that the popularity of websites follows a power law (see, for example, Lada A. Adamic and Bernardo A. Huberman, “Power-Law Distribution of the World Wide Web.”). What this means is that a relatively small number of websites account for the vast majority of visits by users. Presumably, ads will only be placed on websites that attain some minimum level of popularity; otherwise, the ads wouldn’t generate enough views to be cost effective. The trick is then to determine the threshold level of viewers per website that would make ad placement a worthwhile prospect and trying to determine how the number of websites with that minimum level of visitors has changed over time, given the power law distribution of websites. Unfortunately, this would be is no trivial undertaking, so I will take the easy way out by focusing on trends in ad revenues per user.

Trends in US Online Ad Pricing

This section describes recent trends in pricing for Internet advertising. These trends will also serve as a backdrop for the analysis of the Adblocking Game.

In the following sub-sections I first define the different Internet advertising models. I then go on to describe trends over time in (i) prevalence for specific ad models, (ii) pricing and effectiveness of ad models, and (iii) patent activity associated with ad models. I finish the section by collecting together the information on changes in ad model effectiveness and pricing over time and try to make sense of the various trends.

Click-Through Rate (CTR): A ratio showing how often people who see your ad end up clicking it.

Conversion: A conversion happens when someone clicks your ad and then takes an action that you’ve defined as valuable to your business, such as an online purchase or a call to your business from a mobile phone.

Conversion Rate: The average number of conversions per ad click.

Yamaguchi indicates that the various pricing models “are translated into a single metric on the publisher side: eCPM, or effective-cost-per-impression,” where he defines eCPM as:

… [C]onversions are difficult to predict because they happen less often, after more touchpoints, and are dependent on many different factors. Because of this, CPA pricing is more risky for the publisher compared to CPC pricing, which in turn is riskier than CPM.

For non-auction media, the result is an often-seen and rather straightforward order of preference, where a publisher may first sell as much inventory as possible on a CPM (preferably premium) basis, and then any remnant inventory on a CPC basis, and moves on to CPA (affiliate) sales as a last resort.

The end result is that there is a risk and effort vs. scale tradeoff for the advertiser, where low-risk options such as CPA-priced campaigns have limited scalability; whereas, CPM or CPC campaigns can potentially attain the same CPA target at greater scale, but requires greater optimization effort to reach that same level of efficiency.

It comes down to which of these three factors the advertiser is concerned with the most: Effort, Efficiency, and Scale.

• Effort is the time and knowledge required to optimize the performance of an ad campaign.

• Scalability is how much volume you can obtain for the objective.

The overall trade-off between effort, efficiency, and scale for different pricing options is shown in the chart below [Figure 7]. 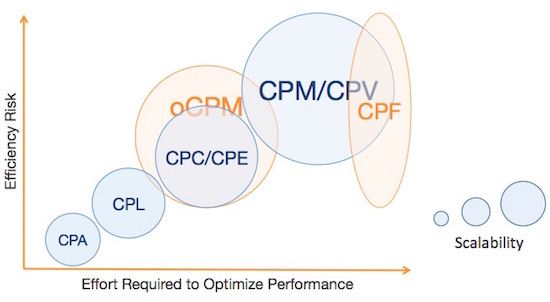 So which pricing models are most prevalent? Figure 8 shows that over time, performance-based ad models (CPC) have become twice as prevalent as impressions-based models (CPM). 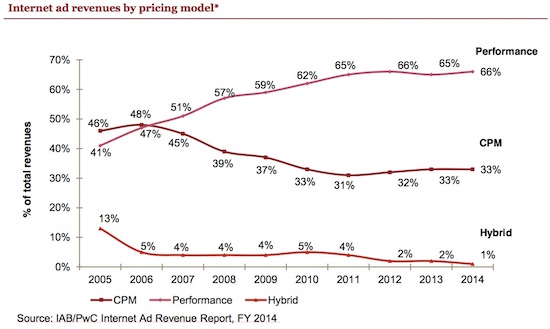 In “The Cost of Pay-per-Click (PPC) Advertising – Trends and Analysis,” Jonathan Hochman provides ad pricing and click-through rates based on “average results for a group of approximately fifty advertisers on the Google AdWords ad network.”

Hochman explains the 2005 through 2007 drop as being due to an increase in Google’s content network. Presumably, a broader network might very well have lower response rates than those in a more concentrated one. 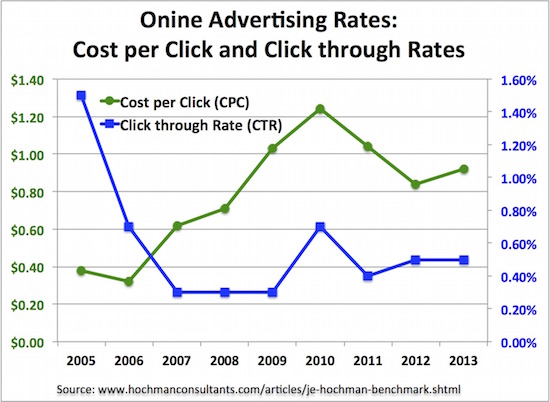 •  Invalid click rates generally increased between 2006 and 2011, and then dropped off somewhat between 2011 and 2012, remaining relatively stable through 2013. 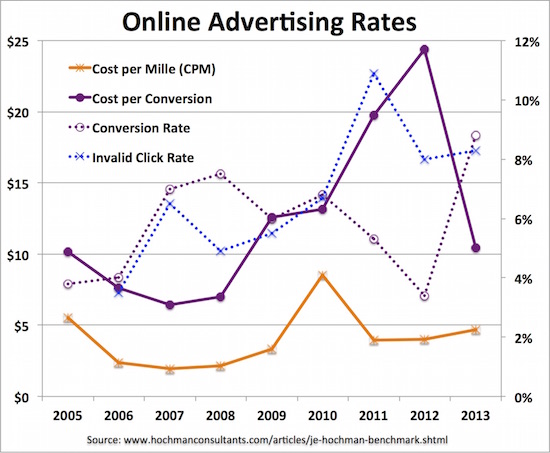 A source of information on changes in ad effectiveness over time is patent activity in the area. In “Web Based Targeted Advertising: A Study Based on Patent Information,” Nishad Deshpandea, Shabib Ahmedb, Alok Khodec analyzed patent activity for “internet based targeted advertising.” Figure 11 illustrates their findings for the total number of patents in the area over time. The study indicates that annual patent activity increased significantly between 2004 and 2010, remained constant between 2010 and 2011 then dropped off significantly through 2013. 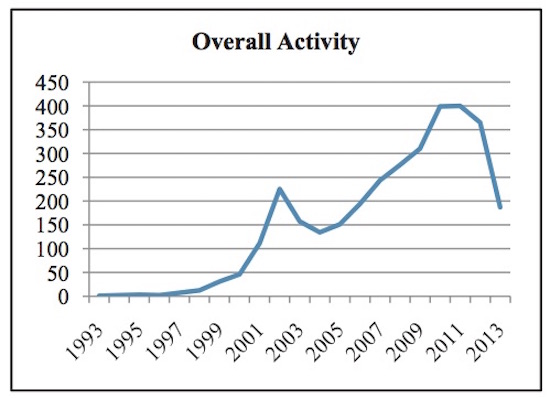 So, what to make of the information presented in Figures 8 - 11?

•  Changes in the supply of ad space by Content Providers relative to the demand for online ad space by Advertisers,

We know from information previously presented that

Given the power law distribution of websites, I presume that [this is the most tenuous of my assumptions]

(ii)  Ad revenue per website that hosts ads has been following a similar pattern to that for ad revenue per user.

(iii)  Impressions are easier to fake than clicks, which means performance-based payments are less susceptible to fraud than impressions-based payments;

(iv)  Increasing amounts of impression fraud (i.e., visits to a website for the sole purpose of increasing the number of website impressions) lead to lower click through rates:

Click through Rate with No impression Fraud = Clicks / Impressions

So now using the seven points above, together with the other information we’ve learned about online advertising, we are left with the following patterns to explain:

Improvements in advertising technologies (i.e., targeted advertising) over time (point (vi)) should increase the efficiency of advertising, leading to higher click through rates and lower costs per click.

At the same time, however, the power law distribution of websites, together with the increasing rates of ad spending (increased demand = higher price) suggest that more popular websites are being increasingly inundated with ads, leading to User saturation (points (i) and (v)). That is, it’s been getting harder to get Users to click on ads, which means that click through rates will be lower and Advertisers will pay more per click.

Conversely, the incidence of ad fraud (click fraud and clickbait) has been increasing (it’s been easier to generate clicks), leading to lower costs per click and higher click through rates (point (iv). To the extent, however, that Advertisers have improved their ability to deter click fraud, its impacts would be attenuated.

•  Trends in Costs per Mille (Impression)

Greater demand for advertising over time (point (i)) would lead to higher costs per impression.

Greater demand for advertising over time (point (i)) would lead to higher costs per conversion.

At the same time, the power law distribution of websites, together with the increasing rates of ad spending (increased demand = higher price) suggest that more popular websites are being increasingly inundated with ads, leading to User saturation (point (v). That is, it’s been getting harder to get Users to respond to ads, which means that conversion rates will be lower and Advertisers will pay more per click.

Greater demand for advertising over time (point (i)) leads to greater benefits associated with ad fraud (i.e., there’s more money to be made), which would increase the incidence of ad fraud in all forms.

Go to Part 2: About Internet Adblocking