Evolution of the Adblocking Game, Part 2

In Part 1 of this analysis I described how advertising dollars have remained relatively constant over time, even as radically new venues for ads have appeared. I then described how it was the advent of ad networks that enabled Advertisers to cost-effectively advertise on the Internet, but that the ensuing dynamics have led to an over-proliferation of ads. I ended Part 1 with a discussion of how the ad situation for mobile Users is exacerbated by the unnecessarily poor quality of mobile web browsers.

In this second part of the analysis, I describe how trends in the way Users have been accessing the Internet have led to decreases the effectiveness of previous modes of advertising.

Three General Trends in Internet Use

The way Users have been accessing the Internet has been changing over time in three different ways: (i) by source of access, from desktop (PC) to mobile device; (ii) by mode of access, from web browsers to apps; and (iii) by destination of use: from fragmented websites to platforms.

1.  Source of Access: Users Moving away from Desktop toward Mobile 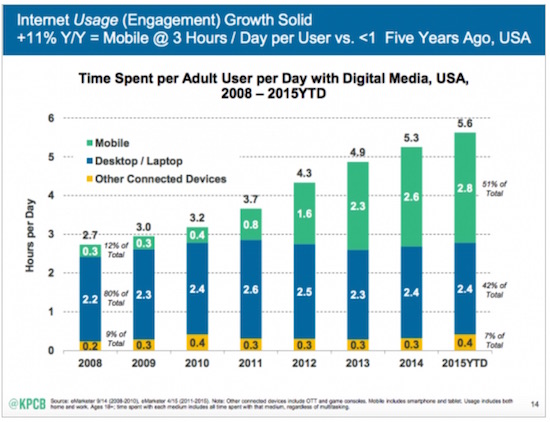 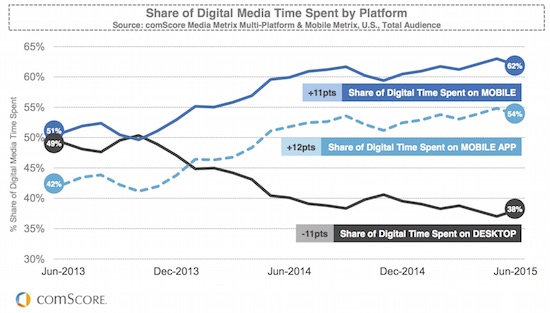 2.  Mode of Access: Users Moving away from Browsers and into Mobile Apps

Since the inception of mobile devices, mobile Users have spent more time accessing digital media from apps than from browsers, given the horrible mobile browser experience, as discussed previously. This trend in mobile app versus mobile browser usage can be inferred from Figure 5, by comparing the dark blue Share of MOBILE line with the light blue Share of MOBILE APP line.

In contrast, Users have never spent much time accessing digital content from apps on their desktops, since browsers have always provided good User experiences.

It follows that as Users transition from accessing the Internet more from desktops to accessing it more from mobile devices, User access of the Internet through apps will increase, while access through browsers will decrease. The data in Figure 5 can be used to illustrate just these trends, as seen in Figure 6. 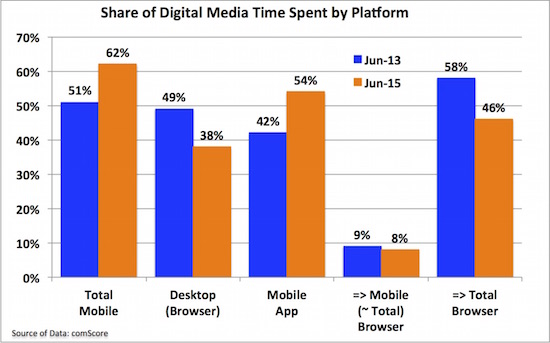 People are spending increasingly more time each day on the Internet, and much of this increase has been accounted for by time spent on social media platforms.  As John Herman in “Mutually Assured Content” puts it,

Twitter and Instagram and Vine and Snapchat and especially Facebook are larger concentrations of people than virtually any conceivable publication, and these people are clicking, tapping, scrolling and sharing more vigorously than people ever did on websites. Platforms! Where the action is; where the actions are.

… [T]he internet is capturing more and more of our time each day – with total hours spent online via PCs, laptops, mobiles and tablets growing from 5.55 in 2012 to 6.15 in 2014. One of the drivers of this is still-increasing levels of engagement with social networks, which have climbed from a daily average of 1.61 to 1.72 hours over the period in question. Micro-blogs have risen too, now typically capturing 0.81 hours per day.

As a share of the time we spend online, these engagement figures mean that social networking now accounts for almost 30% of our daily internet activities, with micro-blogging approaching the 15% mark… we’re actually spending more time on networks now than in the earlier part of the decade – with the rise of the mobile internet, and the ability it affords us to connect to networks at any time and from any location, being a major driver of this. 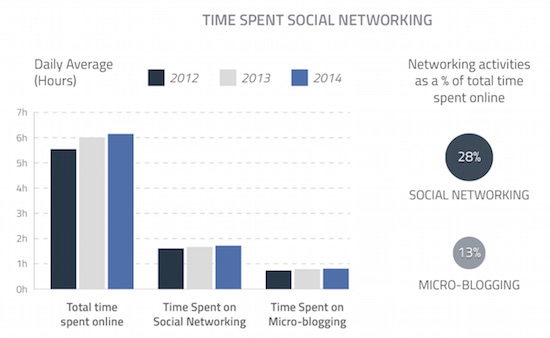 •  People spend much more time accessing the Internet through mobile apps than they do through mobile browsers (the point made in the previous subsection), and

•  A significant portion of the time Users spend on their mobile devices is spent on social media (the point made in this subsection). 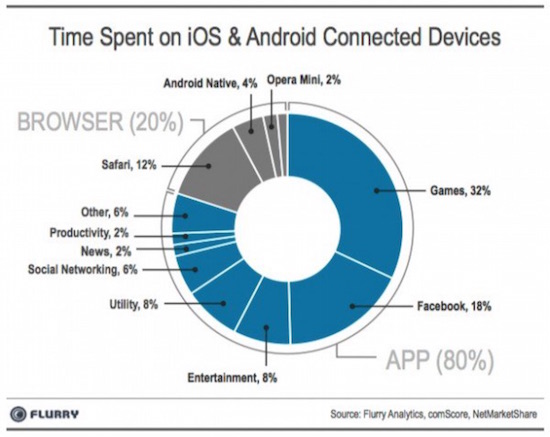 In order to better internalize all this information, I came up with a couple of visual representations for the three sets of trends in Internet access (Figures 9 and 10). Before I get to the figures, however, let me first discuss the information I used to create the visuals.

iAd is a mobile advertising platform developed by Apple Inc. for its iPhone, iPod Touch, and iPad line of mobile devices allowing third-party developers to directly embed advertisements into their applications. Announced on April 8, 2010, iAd is part of Apple's iOS 4... Hosted and sold by Apple, the iAd platform is expected to compete with Google's AdMob mobile advertising service.

Similar to AdMob, iAd facilitates integrating advertisements into applications sold on the iOS App Store. If the user taps on an iAd banner, a full-screen advertisement appears within the application, unlike other ads that send the user into the Safari web browser... Former Apple CEO Steve Jobs initially indicated that Apple would retain 40% of the ad revenue, in line with what he called "industry standard", with the other 60% going to the developers. The amount paid to developers has since been increased to 70%. iAd is expected to benefit free applications as well.

AdMob is a mobile advertising company founded by Omar Hamoui. The name AdMob is a portmanteau for "advertising on mobile". It was incorporated in 2006 … November 2009 it was acquired by Google for $750 million. The acquisition was completed on May 27, 2010... AdMob offers advertising solutions for many mobile platforms, including Android, iOS, webOS, Flash Lite, Windows Phone and all standard mobile web browsers.

A sampling of cases suggests that iAd will come to dominate AdMob, at least on Apple mobile devices.

If the iAd fill rate was closer to 100%, I would remove AdMob ads entirely, but until that happens, AdMob works as a good filler when iAd is unavailable.

*UPDATE* April 2014, my iAD ECPM is dropping to around 0.75 and AdMob is hovering around 0.6. Not sure why, but this is a very interesting development...

Apples response to googles acquisition of admob. Apples advertising platform is definitely the one to beat with great eCpm and impressions you can make a fair amount. Expect around $1 eCpm. iads used ads that are interactive which means more people click them so more revenue for you. Their ads are not intrusive and almost seem like their part of the app. I recommend iAD for a primary advertising platform.

Admob:  Admob used to be great. It was my first ad network and it made me a decent amount of money. When stacked against iAd, it was the dominant revenue generator. A few months ago… maybe around November 2012 or so, this changed dramatically. My eCPMs went from the $1 range falling as low as .02, and this lasted for several months. After months of very sad eCPMs through Admob, I decided that it wasn’t even worth the distraction that it caused my users to display these ads any more. I no longer use Admob. I have read that around that time Admob implemented some change that now requires users to click within a certain area in order for you to get paid for it. This is designed to avoid accidental clicks. Whether or not it does this, I do not know or care. What I do care about is that this is no longer a good source of Ad revenue.

iAd: While I am admittedly a huge fan of Apple and everything they do, I assure you that the fact that iAd has become my main and only banner provider is not due to any favoritism on my part towards Apple. iAd provides good fill rates and averages an eCPM of around $1 for its banner ads, generating me about $80 a week.

A significant portion of Internet content is supported through advertisements. AsPhilip Elmer-DeWitt in “Let the iOS 9 ad block wars begin!” puts it,

Advertisements, in case you haven’t noticed, are what make the World Wide Web go round. Online ads fund everything from Facebook to Fortune.com. Google gets 90% of its revenue from online ads, and the better part of its mobile ad revenue comes directly from iOS.

Browser searches are dominated by Google. Apple has 43% of the US smartphone market, which will come to be dominated by Apple (iAd), rather than Google. From Nathaniel Mott, “Google’s ad penalties are more significant than Apple’s ad blocker”

ComScore says some 64 percent of searches are run through Google. The iPhone, on the other hand, has 43 percent of the American smartphone market.

Now I present Figures 9 and 10, my visual representations of the trends in Internet access by Users. 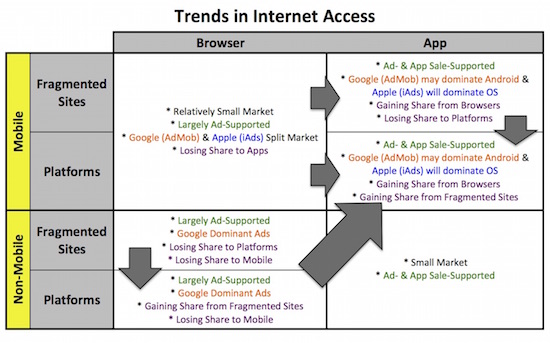 Evolution of Source, Mode, and Destination of Internet Usage 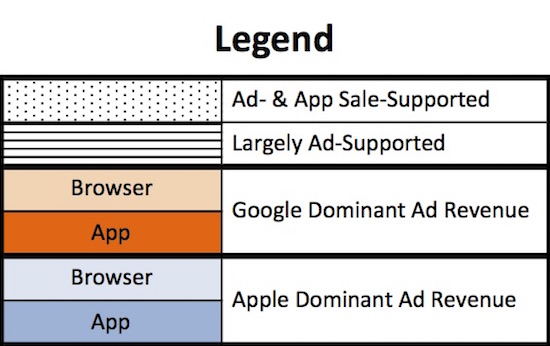 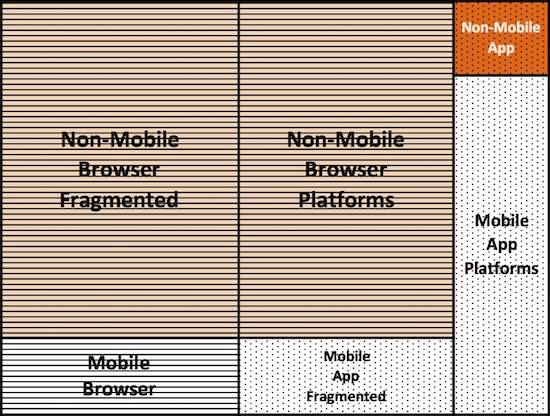 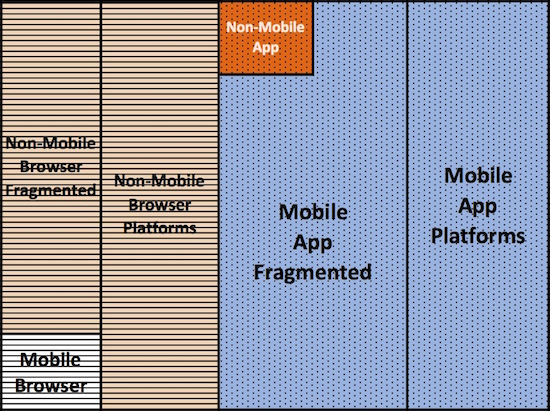 Go to Part 3: Evolution of the Adblocking Game