What Is Game Theory?

Game theory is a tool that’s used to “map out” particular situations and figure out what is likely to happen under various scenarios.

In some cases game theory is employed by means of modeling situations using mathematical equations. In these cases, the equations can be used either to solve for optimal solutions and/or to generate simulations to see how the situation plays out under different scenarios.

However, game theory can also be employed using less rigorous methods. Most situations can be mapped out visually and textually, and then one can use those mappings to better understand situations and draw conclusions.

When Can Game Theory Be Used?

Game theory can be used in situations in which an entity’s payoff (profits, well-being, etc.) is dependent upon actions taken by other entities.

As the world has become globalized and markets have accordingly become more interconnected and complex, game theory has become increasingly applicable to more and more situations. In particular, more situations have become characterized by global ecosystems, in which many players from different countries are involved to different extents and at different levels.

Why Do We Care?

• The use of game theory forces analysts to better understand a situation:

°  What each of the players cares about,

°  Which options (actions) are available to each of the players,

°  How other players’ actions affect each player’s payoffs, and

°  Which actions each of the players are more likely to take under different circumstances.

• The use of game theory also helps analysts understand how they might change the environment so as to encourage more favorable outcomes.

Example of a Game

to Max Value of Company,

To Max Profits from App Sales,

• Price of Apple and Google Smartphones 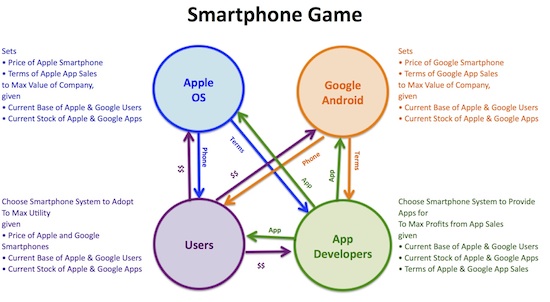 In single-period games, players interact a single time: they choose actions, receive payoffs, and that’s it.

This is the most uninteresting kind of a game. In single-period games, most players will do what’s in their own best self-interest, which generally leads to a degenerate outcome.

The number of times players will face each other in a multi-period game may be (i) known and/or determinate, (ii) indeterminate, or (iii) infinite.

Multi-period games are more interesting than single-period games because they enable players to develop strategies. For example, players can use multi-period interactions either to establish a reputation or to encourage cooperation.

Players can establish a reputation, for example, for being a tough guy or a wimp. Tough guys play aggressively, by forestalling new entry or trying to drive opponents out of the market. Playing aggressively generally entails costs in the short run in exchange for greater potential profits in the long run. Wimps, on the other hand, accommodate other players. Accommodation generally avoids short term costs at the expense of greater potential long term profits.

In multi-market or multi-product games, players interact in several different markets, either simultaneously or sequentially in time.

A case in point is the issue of net neutrality. Proponents of net neutrality allege that owners of internet infrastructure (the pipes) who also provide content to users will favor delivery of their own content over that of their competitors by slowing down the flow the latter.

The Environment Is Constantly Evolving

The environment is constantly changing and evolving because

iii. Players react to actions taken by other players.

As a result of the evolving environment, new players appear, old players disappear, and the natures of players’ relationships with one another change.

More recently, as the world has become increasingly more globalized, and thus more connected, entities are affected by more environmental shocks, players’ actions, and players’ reactions than ever before.

What this means is that the game is constantly changing.

The Environment Is Uncertain

The current and expected future environments are uncertain because:

i. The environment is constantly evolving for the reasons set forth above;

iii. Players generally don’t know all the options available to other players;

iv. More generally, players never really know how other players will react as the environment evolves.

What this means is that players cannot predict with certainty how the game will change.

Network effects exist when the value of being a member of a network increases with the size of the network. There are two different types of network effects, direct and indirect.

Network effects arise in platform-mediated networks (PMNs), which include networks of customers—often called users—who wish to interact with each other, along with one or more intermediaries who provide a platform, encompassing infrastructure and rules to facilitate users’ interactions. PMNs form the heart of the computer, telecommunications, media, and Internet sectors. However, PMNs are not limited to information industries. They can also be found in financial services (e.g., stock exchanges, credit cards, ATMs), health care (e.g., HMOs), energy (e.g., the power grid), transportation (e.g., airlines, container shipping, gasoline stations), and retailing (e.g., shopping malls, barcodes). A diverse array of matchmaking businesses mediate network transactions, including auctioneers, executive recruiters, realtors, and travel agencies. Ranked by market value, sixty of the world’s 100 largest companies earn >50% of their revenue from platform-mediated networks, including American Express, Cisco, Citigroup, Time Warner, UPS, and Vodafone. In short, PMNs are essential features of modern economies.

The ubiquity of network effects in global environments effectively constrains players’ actions. Notably, many games in the tech environment involve one player who is trying to get other players to switch to a new product or technology. To the extent that the technology at issue – both the existing version currently being used in the marketplace, as well as the new technology being introduced by the new player – exhibits network effects, users will be extremely reluctant to switch from the existing to the new versions.