How Do We Conquer Fake News?

“Fake News” has become one of the big afflictions of our times. I just Googled the phrase “fake news,” and it generated 174 million hits. No one seems to know anymore whether or not any reported information is true and/or accurate. This has led people to question the truth of everything, particularly if they don’t like what’s been reported.

Trust in mass media as a whole is declining rapidly across the board. In 1976, 72% of the population had either a great del or a fair amount of trust in mass media. By 2016, that figure had declined to 32%. From Art Swift, “Americans' Trust in Mass Media Sinks to New Low” (and see Figure 1)

Americans' trust and confidence in the mass media "to report the news fully, accurately and fairly" has dropped to its lowest level in Gallup polling history, with 32 saying they have a great deal or fair amount of trust in the media. This is down eight percentage points from last year.

Gallup began asking this question in 1972, and on a yearly basis since 1997. Over the history of the entire trend, Americans' trust and confidence hit its highest point in 1976, at 72 ... 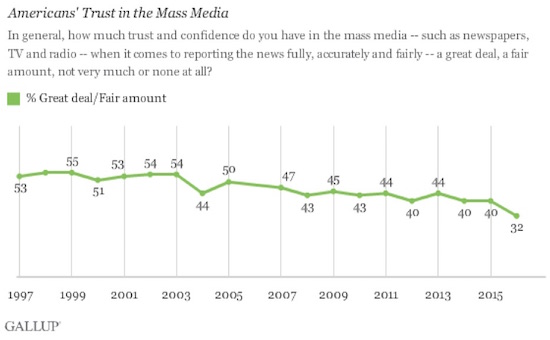 The term “fake news” has been used to characterize several different types of information reports on a variety of subject matters, including:

The inaccurately reported information on these subject matters generally falls into one or more of the following categories:

2.  Sloppy: The information is (unintentionally) inaccurate, due to sloppy reporting, where the reporter doesn’t spend the time or make the effort to check facts or collect all the relevant information. The reporter wants to minimize his effort, but by neglecting to check the facts or do a thorough job, his report ends up being inaccurate and/or incomplete.

4.  Propaganda: The information is intentionally inaccurate, because the reporter is trying to promote an agenda.

5.  Sensationalized: The information is intentionally fake or sensationalized, because the reporter is trying to generate as many views as possible.

Benefits and Costs of Reported Information

Consider the benefits and costs to reporters from reporting accurate versus inaccurate information.

If they report accurate information, then reporters reap the benefits associated with that reporting (e.g., money or recognition), but they also incur the costs (e.g., time and effort) of doing so:

When will reporters find it in their interest to report inaccurate information while passing it off as being accurate? This will happen when

The relationship in (4) has three basic elements:

So the relationship in (4) says that people will do better by passing off inaccurate information as being accurate when the incremental benefits of doing so plus any incremental cost savings exceed the expected costs of being caught reporting bad information.

Generally speaking, relative to the case in which they report accurate information,

This hypothesis is illustrated in Figure 2. 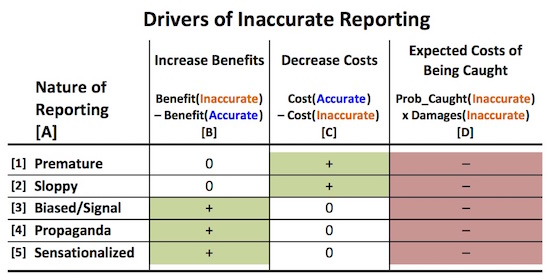 So then we can conclude that people will tend to try to pass of inaccurate information as being accurate in any of the following situations:

Consequences of the Increasing Prevalence of Inaccurate Information

In a different, previous blogpost, A Brief Overview of the Fake News Game, I analyzed the proliferation of fake news by people trying to make money by promoting sensationalized information. In that analysis I came to the following conclusions:

From the analysis above on Drivers of Inaccurate Reporting, it follows that the reporting of accurate information will be promoted by

Recently there have been several different examples of individuals or organizations founded to encourage more accurate and complete reporting of information.

Chris Ciabarra, co-founder and CTO of Authenticated Reality, says the startup’s new browser—one that would require users to prove they are who they say they are—is the right way to mend what’s wrong with the Internet. With his product, “everyone knows who everybody is,” he says. “When you do something, you’re putting your reputation behind it.”

A new online journal is aggregating people’s efforts to replicate the findings of scientific studies. The purpose of the journal is two-fold. First, it will help inform researchers so they don’t “waste time following up on flawed findings.” Second, the journal will provide recognitions to researchers who make the effort to replicate reported results. As Jocelyn Kaiser reports in, “If you fail to reproduce another scientist’s results, this journal wants to know”:

The biotech company Amgen Inc. and prominent biochemist Bruce Alberts have created a new online journal that aims to lift the curtain on often hidden results in biomedicine: failed efforts to confirm other groups’ published papers. Amgen is seeding the publication with reports on its own futile attempts to replicate three studies in diabetes and neurodegenerative disease and hopes other companies will follow suit.

The contradictory results—along with successful confirmations—will be published by F1000Research, an open-access, online-only publisher. Its new “Preclinical Reproducibility and Robustness channel,” launched today, will allow both companies and academic scientists to share their replications so that others will be less likely to waste time following up on flawed findings…

Alberts, a former Science editor-in-chief and National Academy of Sciences president who is at the University of California, San Francisco, says the journal will be a place for data that other journals often aren’t interested in publishing because replication efforts lack novelty. “The whole idea is to lower the energy barrier for people doing this,” Alberts says.

Evaluation of Healthcare Reports for Completeness

Recently, a new organization started evaluating new releases of healthcare information for accuracy and completeness in reporting of relevant information. From the company’s website:

HealthNewsReview.org evaluates health care journalism, advertising, marketing, public relations and other messages that may influence consumers and provides criteria that consumers can use to evaluate these messages themselves.

The company uses the following criteria in its ratings of news releases:

Bounty for Proof of Malfeasance

James O’Keefe, political activist and Founder of Project Veritas, is trying to publicize the malfeasance of the mainstream media (MSM). He’s released tapes of conversations by CNN reporters captured covertly, and he is offering a bounty for further evidence of “media malfeasance.” According to Tyler Durden in, “O'Keefe Drops "Bombshell" Undercover Video Footage From Within CNN,”

…James O'Keefe and his team at Project Veritas just released covertly captured, previously unseen video footage from within the CNN newsroom. But unlike his usual undercover sting operations, this footage was allegedly sourced from a CNN insider who apparently grew frustrated with the biased reporting of the "fake news" media outlet.

Meanwhile, noting that this is just the "beginning of the end for the MSM", O'Keefe also announced that he will pay a $10,000 award to anyone who comes forward with legally obtained audio or video footage exposing media malfeasance.

One company, ProCon.org, was founded to provide “professionally-researched pro, con, and related information on more than 50 controversial issues.” From Procon.org’s website:

ProCon.org, a 501(c)(3) nonprofit nonpartisan public charity, provides professionally-researched pro, con, and related information on more than 50 controversial issues from gun control and death penalty to illegal immigration and alternative energy. Using the fair, FREE, and unbiased resources at ProCon.org, millions of people each year learn new facts, think critically about both sides of important issues, and strengthen their minds and opinions.

Founded on July 12, 2004, our innovative educational website has become the country’s leading source for nonpartisan information and civic education…

We are entirely donor supported.