How Have Retail Sales Changed Over the Last 25 Years?

This brief analysis examines how retail sales have changed over the past 25 years, both in size and distribution. 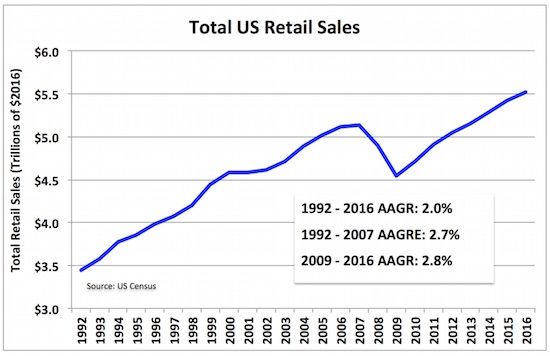 As seen in Figure 2, the top six general categories of retail sales,

The big loser was Food Stores, which decreased its share of total retail sales between 1992 and 2016 by 5.7%. Some of that decrease was offset by an increase in share of Eateries, by 1.9%. However, overall, the food and beverage category has taken a smaller share of retail spending in recent than in previous years.

The big winner was – no surprise – E-Commerce. 6.3% more retail sales have been captured by online vendors over the past 25 years. Of course, some (small?) portion of this is for food, which makes up for a bit of the loss in that category. 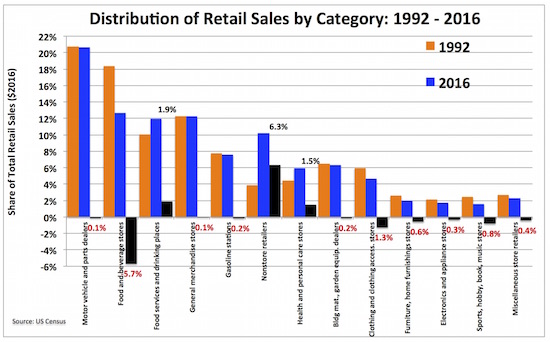 If we take a closer look at the details (see Figure 3), we see that there has been another shift. Within the General Merchandise category, there has been a shift away from Department Stores, whose share decreased by 6.0%, and towards Warehouse Clubs and Supercenters, whose share increased by 6.2%. The increase in share of Warehouse stores surely accounts for a large portion of the drop in sales at Food Stores.

Figure 3 also indicates that there has been an increase in sales at Pharmacies and Drugs Stores, whose share of retail sales increased by 1.1% during the period. 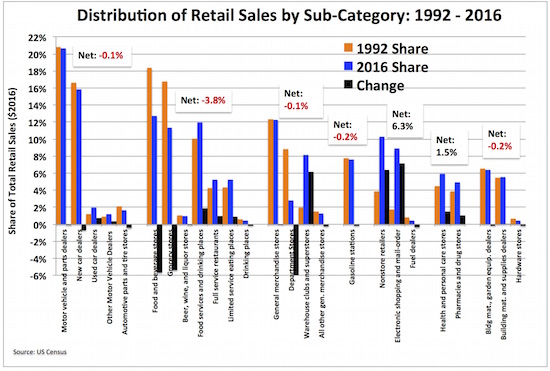 A closer look at the smaller categories of retail sales in Figure 4 shows that Clothing Stores have taken a hit, as have Sports and Hobby Stores. It’s likely that most of these decreases have simply shifted from bricks-and-mortar stores to online purchases. 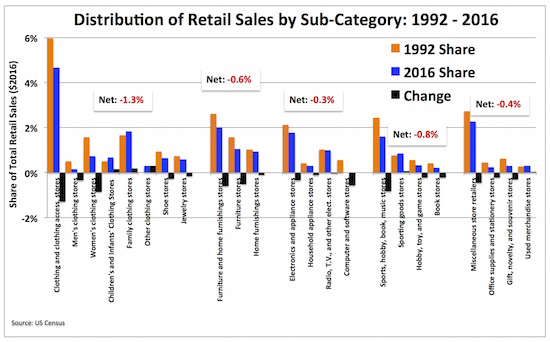 In short, over the past 25 years, we have seen the following trends in retail sales: