This is a presentation I’m preparing for “Tech Startup Conference: Artificial Intelligence” being held on September 26, 2017.

You and I are in a Game if what you do affects what I get. More technically, a Game consists of a set of:

(i) How players are interconnected, that is, how exactly their actions affect the outcomes that other players get;

(ii) What the expected outcome will be under the current environment; and

(iii) How to change the environment to get "better" outcomes for a particular player.

I will discuss what constitutes an “environment” in more detail later (Section 7).

1. OS Developers: The technology that drives the smartphones systems is the operating system, developed by Apple and Google.

2. Software Providers: To create value for Users, smartphones must be used in conjunction with other products and services, namely

Apps provided by Apps Developers, and

3. Users: Smartphone handsets, services, and accessories are purchased by Users, who use them jointly to consume voice and data services.

Note that all the different components must be used together at the same time for Users to be able to generate the user experience provided by the smartphone system. That is, all the Players’ components work together to jointly create value for Users. 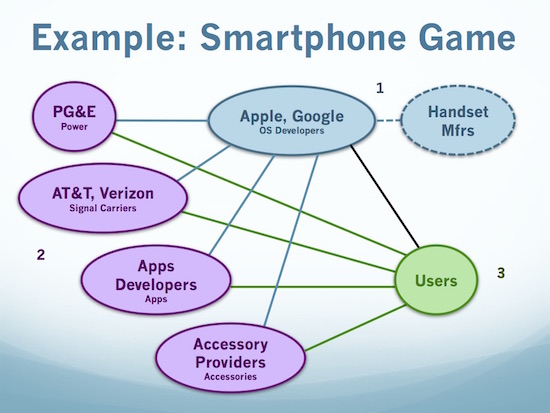 Specific applications include, for example, 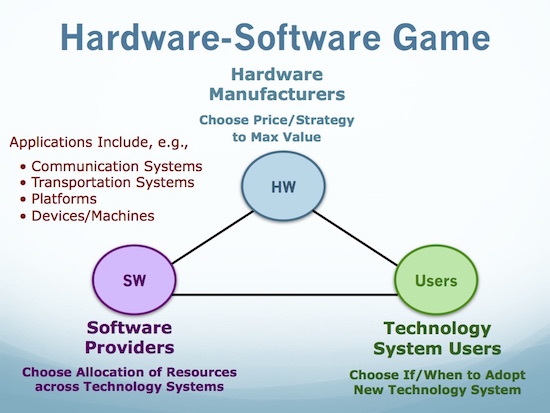 I use the term “Hardware Manufacturer” to refer to an entrepreneur who introduces the primary component of a new technology system. The “new technology system” must be different enough from currently used systems so as to be incompatible with current “software,” as defined below.

Hardware Manufacturers choose a time path of prices and strategies to

(i) optimize the provision of software by Software Providers and

I assume that at the time that the Hardware Manufacturer’s technology is introduced into the marketplace, Software Providers are deploying their resources in other uses, such as generating content for other technology systems.

Software Providers must choose the timing (how long to wait) of redeployment of their resources away from their current activities and towards providing software for the Hardware Manufacturer’s system.

Users are the potential consumers who generate “consumption experiences” from the Hardware Manufacturer’s new technology system.

There are three key issues to note in the Hardware-Software Game.

First, Entrepreneurs’ technologies are part of larger systems that contain multiple components that must be combined for Users to jointly generate value. More specifically, Hardware Manufacturers’ payoffs (profits) are dependent upon the actions of other players, namely Software Providers and Users. This means that the actors who participate in technology systems, together with their actions and payoffs, form a Game.

The second key issue in the Hardware-Software Game is that User adoption requires (i) that a minimum set of components be available in the market to be used to generate a consumption experience, and (ii) that the system components available at the time of User adoption provide sufficient value to users to justify their switch to the new system.

Taken together, these first two requirements generally lead to a chicken-and-egg problem between Software Providers and Users:

In the case of a chicken-and-egg problem, the Hardware Manufacturer must encourage “premature” adoption by convincing

(i) Software Providers to redeploy resources toward the new system earlier than they would otherwise do, and

(ii) Users to adopt the new system earlier than they would otherwise do.

The third key issue is that technology system “success” requires harmony, that is, coordination of actions, across elements of the environment. It is generally up to the Hardware Manufacturer to choreograph pricing and strategies to achieve success, where “success” includes,

(ii) an optimal pattern of system-wide value creation, and

(iii) an optimal pattern of value extraction (by the Hardware Manufacturer).

For example, Amazon, Apple, and Walmart all do tremendous jobs of choreographing the vast multitudes of components that make up their systems. As a result, these systems all create a fantastic amount of value for their owners. In stark contrast, sub-systems within both the healthcare industries (e.g., hospitals, clinics, etc.) and education industries (schools, colleges, etc.) have been cobbled together from the bottom up in completely ad-hoc manners. And as a result, while these systems generate a tremendous amount of activity, it’s wholly uncoordinated and unsynchronized, leading to massive amounts of unproductive activity and downright waste. And as a consequence, these systems fail to achieve anything close to their potential values.

When I defined what Game Theory is in Section 2, I said that I use game theory to understand what the expected outcome will be, given the current environment, and how to change the environment to get "better" outcomes. Well, let’s unpack what the environment consists of. The Social Environment is the collection of Technology Ecosystems and Market, Government, and Cultural Environments – associated with a technology system.

In Section 5, I indicated that system success requires harmony, or coordination of actions, across all the elements of the current environment. I also indicated that it is generally up to the Hardware Manufacturer to achieve this harmony through his pricing and adoption strategies.

Well, in the full Social Environment context, it’s not just the Technology Ecosystem that the Hardware Manufacture must consider, but the Market, Government, and Cultural Environments as well (see Figure 3).

(i) to allocate those resources to producers,

(ii) to generate products and services, and

(iii) to allocate those products and services to customers

(i) to generate taxes, subsidies, laws, regulations, and transfers, and

(ii) to provide for public works, that is, infrastructure, to facilitate the smooth flow of social and market activities in society. 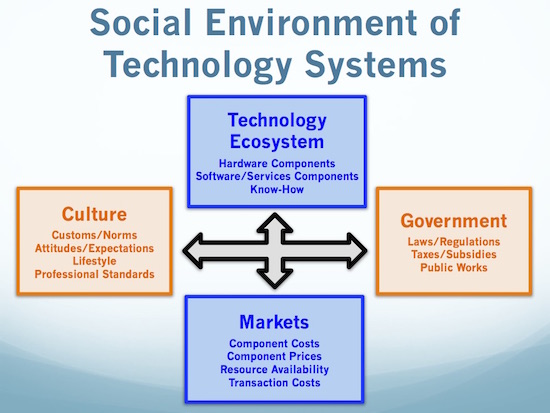 >>  Technologies are systems of interdependent components that combine to jointly provide value to Users.

√  Value created by the system

requires strategic alignment across all elements of the environment, generally required and provided by Hardware Manufacturers in successful systems.

>>  Mapping the game helps you understand the dynamics and how to change them.