The Future of Money

Traditional currency systems are being assailed from several directions. Some propose digitizing national currencies as a means to decrease transaction costs, facilitate tracking, and discourage illicit uses of currency. Some suggest a single, global currency system is inevitable. Others propose creating non-government-backed forms of currency to eliminate the ability of government to control transactions, as well as to decrease transaction costs and enable anonymity.

What does the future hold for currency?

For more information on currencies and Bitcoin, see my previous blog, “Bitcoin: Wave of the Future or Flash in the Pan?”

Needs of a Currency System

Essential Functions of a Currency

Essential Characteristics of a Currency

Other Characteristics of a Currency

Buyers and Sellers often seek other characteristics from a currency:

Why Government Wants Control over Money

Clearly, governments won’t easily give up the fight for control over currency. Why do governments want their own currency systems? In a word, control.

The Future of Money Issues 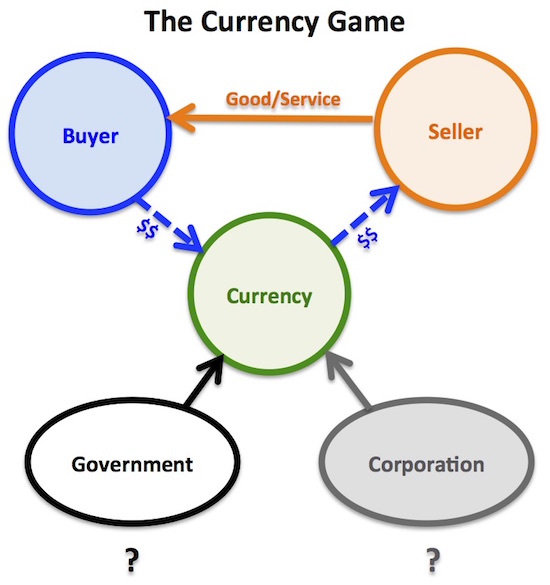 A nation’s economy can be partitioned into three sub-economies (For a more detailed description of these different markets, see my earlier blog “The Increasing Significance of the Shadow Economy”):

Much to governments’ chagrin, the shadow and black markets are never going to disappear. Governments can minimize the size of the shadow economy by making the legitimate economy more hospitable to citizens. But there will always be transactions performed under-the-table.

The stability of the dollar has made it one of the currencies of choice for shadow market and black market activities globally. In particular, the $100 bill has remained an important store of value for people around the world. As Brad Plumer notes in his 2013 article, “$100 bills remain one of America’s leading exports”:

And an estimated two-thirds of those $100 bills are parked overseas. Many are no doubt used for black-market purchases and other illegal transactions. But many are simply held onto as savings, particularly in volatile nations like Cyprus or Greece.

Either way, $100 bills remain one of America's leading exports.

Large global demand for $100 bills is a boon to the US government. It supports the US dollar. Without this demand, interest rates in the US would be higher. As Bruce Bartlett at Economix notes in Brad Plumer’s article cited above,

It’s like borrowing money from foreigners that most likely will never have to be paid back, at zero interest.

As an interesting side note, higher denomination bills used to exist but were discontinued for “lack of use.” From Wikipedia:

Will There Eventually Be Only One Global Currency?

For larger nations, given governments’ strong desire for control, it is unlikely they would cede that control to a “higher” power. Since there will always be taxes, governments can simply insist that citizens pay taxes using national currency. This will always ensure at least a minimal demand for the nation’s currency.

At the same time, government’s ability to control its currency benefits its citizens. Floating currencies enable governments to exercise monetary policy (change interest rates and/or the supply of money) to help keep its economy on track.

What’s happening in the European Union with the euro is a case in point. European countries, such as Greece and Spain are having big problems with their economies. The fact that they don’t have the ability to use monetary policy to improve the competitiveness of their goods and services is a significant contributor to their problems. As Timothy B. Lee describes in “The euro was a big mistake, and Greece is paying the price”:

Basic monetary theory says that when an economy is in a depression as severe as the one in Greece, the solution is aggressive monetary stimulus. So if you wanted to help Greece, you'd want to start printing more money in an effort to lower interest rates, boost demand, and bring down the country's unemployment rate.

The problem is that the ECB [European Central Bank] is responsible for both Greece and Germany — and 17 other countries as well. The right policy for Greece will be a disaster for Germany, and vice versa. Any policy the ECB picks will be either too tight for some European countries or too loose for others.

How would the interests of government and private institutions differ regarding their backing and control of a currency system? The different issues are discussed below and summarized in Figure 2.

Do governments garner greater trust than private organizations? Not necessarily. Wikipedia lists dozens of companies around the world – hotels, breweries, wineries, restaurants -- that have been in existence for hundreds of years. In the US, the oldest family-owned business is the Shirley Plantation in Virginia, which dates backs to 1614. The oldest continuously operating family-owned business in the US is the Tuttle Farm in New Hampshire, which has been operating continuously since 1632. Certainly, these companies have out-lasted most governments. 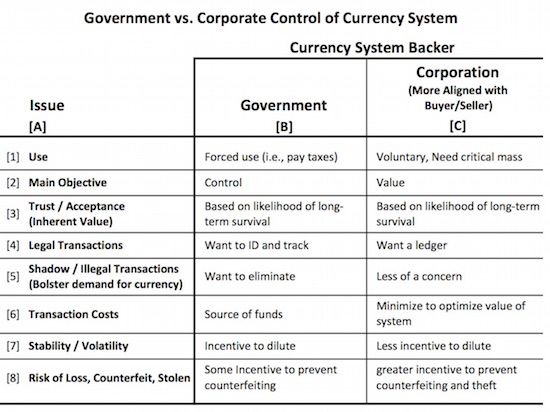 Could Multinationals Support a Currency System?

Could large multinationals, such as Google, support a currency system? In 2012, Google revealed that it almost did, in fact, issue its own peer-to-peer currency, Google Bucks. However, Google decided not to go ahead with the system, due to government concerns that it could be used for black market activity (see, for example, Dylan Love, “'Google Bucks' Were Almost A Real Thing”).

Certainly, multinationals would be as qualified as any private entity to back a currency system. Actually, name-brand recognition and trust would incentivize users to adopt a currency system backed by a well-known multinational sooner than users would adopt a system by an unknown private individual or organization.

How Many Competing Currency Systems Can Coexist?

Wikipedia defines legal tender as “anything which when offered in payment extinguishes the debt.”

According to the US Treasury, US coins and currency are legal tender, but creditors can refuse to accept them as payment. Go figure.

This statute means that all United States money as identified above are a valid and legal offer of payment for debts when tendered to a creditor. There is, however, no Federal statute mandating that a private business, a person or an organization must accept currency or coins as for payment for goods and/or services. Private businesses are free to develop their own policies on whether or not to accept cash unless there is a State law which says otherwise. For example, a bus line may prohibit payment of fares in pennies or dollar bills. In addition, movie theaters, convenience stores and gas stations may refuse to accept large denomination currency (usually notes above $20) as a matter of policy.

According to Nathan Lewis in, “What Is A ‘Legal Tender Law’? And, Is It A Problem?” people in the US can negotiate to use whichever currency system they want.

It sounds like the same holds true for Europe. According to the European Commission,

Within the euro area, only the euro has the status of legal tender... This means that in the absence of an agreement of the means of payment, the creditor is obliged to accept a payment made in euro which subsequently discharges the debtor from his payment obligation.

Yet, during transactions, contractual parties are free to use other official foreign currencies with legal tender status in the state of issuance (e.g. the pound sterling or the US dollar). The same applies to privately issued money like local exchange trading systems (e.g. voucher-based payment systems in certain communities) or virtual currency schemes (e.g. Bitcoin). Although these are not official currencies and have no legal tender status, parties can agree to use them as private money without prejudice to the official currency.

Currency systems exhibit economies of scale, which means that a particular currency system becomes more useful, more valuable, and/or less costly when more people use it. For example, there are transaction costs associated with using different types of currency. In particular, banks and credit card companies both generally charge you a fee — “a change fee” — if you make a purchase using a currency system that’s different from that designated as the “home” currency. The existence of economies of scale will tend to limit the total number of different currencies people will use.

At the same time, different currency systems offer different advantages to buyers and sellers. US dollars (and credit cards) offer convenience, acceptability, and low transaction costs for purchases made in the US. Gold might offer security. Crypto-currencies might offer anonymity.

Generally, there are only a few basic needs that we have, such as convenience, security, or anonymity, that will cover most of the transactions in which we engage. To the extent that different currency systems fulfill different needs, they can coexist. However, due to the existence of economies of scale, many similar currencies are not likely to co-exist among people who use those currencies to meet similar needs.

At the same time, given the desire for different government to want their own currency systems, the total number of currency systems that exist won’t collapse to too few options.