Discussion of the Mapping Apps Game

Mapping apps, such as Waze and Google Maps, have created enormous value for users by helping them get to where they’re going faster. As least initially, when few people were using mapping apps, the apps were particularly helpful for individual users in rerouting them around traffic problems. However, now that a large portion of drivers has adopted mapping apps, we’re seeing problems with side routes becoming congested, as everyone is being rerouted through the same detours. So not only is there congestion on the original route -- from where drivers have been re-routed – but there is now congestion in many more additional locations in society – to where drivers have been re-routed.

It turns out that mapping apps are most beneficial to users for dealing with congestion problems when only a few users have adopted them. But they become less useful to users as more people adopt them. That is, the mapping apps exhibit negative network externalities for users when it comes to congestion. At the same time, as more people adopt mapping apps, other members of the community – those who live on the routes through which mapping app users are being re-routed – also suffer, yet another negative externality.

What we have is a game:

This analysis examines mapping apps and other types of resource allocation games.

At any moment in time, the capacity on the roads is fixed. Drivers compete for space on the roads. Each driver wants to get to where he’s going as quickly and efficiently as possible, and he chooses the route he thinks will achieve this. As roads have become more congested, drivers have continued to use traditional (default) routes: freeways for longer, more direct trips, and local areas for shorter trips.

The nature of the mapping apps is to re-route drivers away from more congested roadways (say, freeways) onto less congested roadways (say, local roads) (see Figure 1). This helps the re-routed driver (i.e., app user), to the benefit of other freeway drivers, and at the expense of other local drivers. So mapping apps create the following benefits for the different groups of players:

The net benefit to society will depend on the relative magnitudes of the gains and losses to each group. 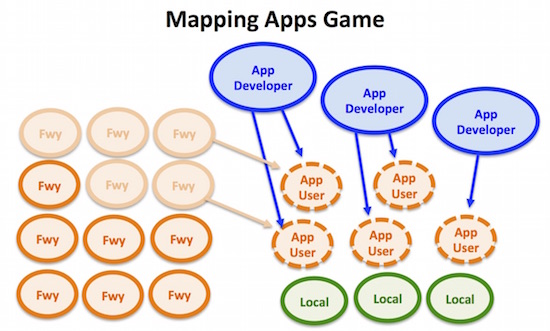 More specifically, the net impact on society of the routing depends on the following factors (see Figure 2). 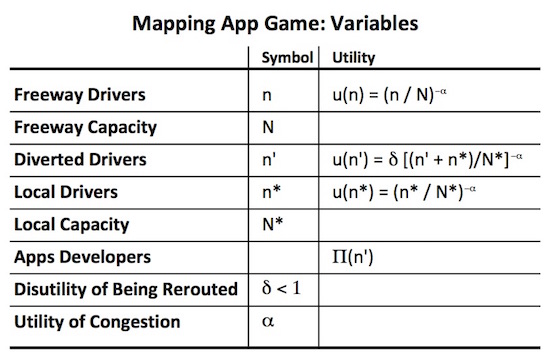 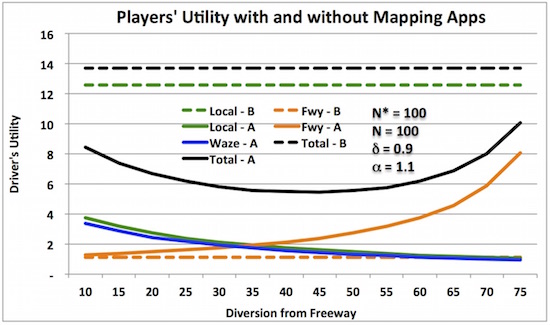 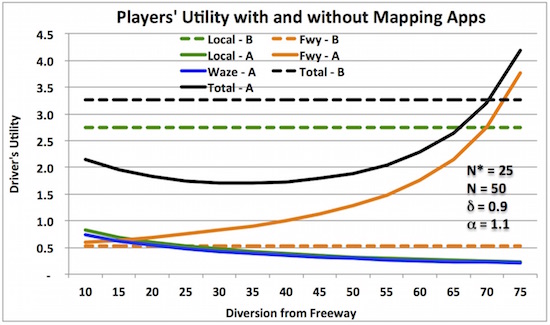 Comparisons of pre- and post-app payoffs indicate the following.

Too Little Road Capacity, High Disutility of Being Re-Rerouted 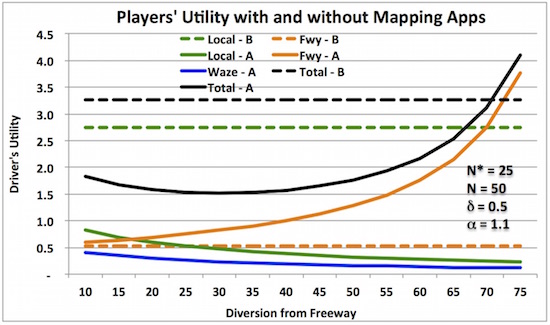 1. Users compete for a scarce resource. The game generally evolves organically, as users adopt heuristics or ad hoc methods for making allocation decisions. For example, drivers may decide to use local roads only when staying in town and freeways only when going out of town. Students do the best they can with the SAT on their own.

3. At some point, ad hoc methods no longer provide optimal actions for every user. Some users might start to adapt to increases in congestion on their own, creating new heuristics. For example, drivers might use local roads to bypass certain freeway entrances during rush hour. Or ticket buyers might queue up in advance of ticket sales. Students may study extra hard for the SAT.

4. Eventually a new player enters the game, offering select users a more systematic (e.g. data-driven) method for determining actions. The new method provides select users an advantage over other users. However, because the resource at issue is scarce, the users who benefit from the new method do so at the expense of other users. For example, mapping apps providers enable freeway users to bypass freeway congestion using local roads. But the diversion of freeway users to local roads increases congestion for local drivers. Ticket scalpers help people with (i) high time costs and/or (ii) high event valuations buy tickets more readily, at the expense of people with lower time costs or lower valuations. SAT coaches help people with lower time costs and or higher ability to pay to spend more time and resources prepping for the SAT, at the expense of students with higher time costs and/or less ability to pay for tutors.

6. Multiple providers for and excessive users of the new method may lead to less coordination and/or more congestion than there would have been without the new method. That is, excessive adoption may lead society to be worse off as a whole.

Players in the Game Have Competing Interests

In zero- and negative-sum games, society generally wants as little adoption as possible.

Currently, there are several different providers of mapping apps. Presumably, each has its own algorithm for routing drivers. Algorithms often reroute drivers in non-organic (unintuitive) ways. As more drivers are re-routed using different algorithms, traffic flows become much more unnatural or unintuitive, which creates chaos for all drivers. With uncoordinated re-routing across different providers, there is thus more chaos in the system than there would be either with a single provider or with no providers at all. Said differently, each provider is creating externalities for other providers by increasing the uncertainty in traffic flows.

Solutions Providers Incorporate Social Costs: The private costs to users of reallocation solutions are less than the social costs. One way to mitigate the problem is for solutions providers to incorporate the social costs into their solutions. In particular, mapping apps providers can design their solutions so that drivers are only re-routed when doing so does not increase congestion (unduly) on alternative roads. Of course, this is not likely to happen in free markets.

Coordination of Solutions: Solutions providers can coordinate their actions to create less chaos in the system. Again, this is not likely to happen in free markets.

Education: Solutions providers and users can be made aware of the costs they’re imposing on society by their actions. Perhaps shaming can be invoked in particularly egregious situations.

Transparency: In many cases, there’s a lot more uncertainty in the system than solutions providers are letting on and/or that users are aware of. If users are made aware of the extent of uncertainty, they may choose not to use re-allocation solutions that may not actually end up helping them, but that will still impose costs on others.

Increase Costs of Diversion: Alternatively, society (or those who stand to lose) can make it more costly for users (diverters) to re-allocate or divert. Ideally, society would like impose costs on users but not on non-users. Unfortunately, that’s difficult to do. Examples of raising the costs of diversion include decreasing speed limits on local roads or putting up stop signs or speed bumps to slow through traffic.