The configuration of our current healthcare system is a product of its history: It has evolved into its current form as a consequence of two primary sets of factors. First, the healthcare system has evolved into its current form due to historical laws and regulations that have generally catered to the interests of healthcare payers and providers. And second, the system has evolved based on self-serving actions taken by payers, providers, and patients in response to those laws and regulations.

On the Patient Side

A victim of the increasing extent of cross-subsidization in the current system is any meaningful relationship between risk and payoff for different sets of participants in the system. The loss of this risk-reward relationship has created massive moral hazard situations for parties in the system. More specifically, people don’t bear the full healthcare costs of their risky – unhealthy – lifestyles. As such, they choose to take on more risks and unhealthy behaviors than they would if they had to pay the full costs of doing so. Our unhealthy populations simply offload their higher associated healthcare costs onto the rest of society. This has created a vicious cycle: As people have become less healthy, healthcare costs have increased. But costlier groups haven’t been able to afford to pay the costs they have incurred, so the degree of cross-subsidization has further increased. In turn, this has further decreased the portion of costs paid for by the unhealthy, which has led them to make even poorer choices.

Figure 1: The Vicious Cycle of Cross-Subsidization 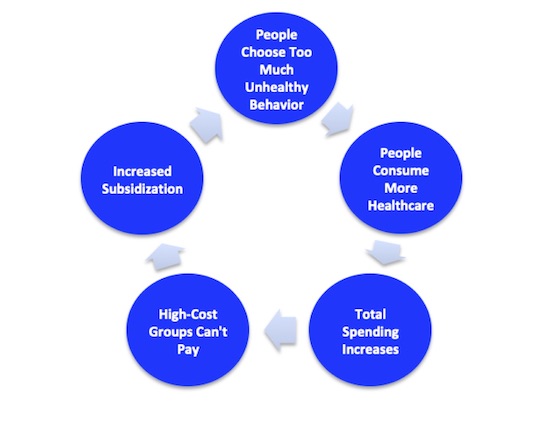 On the Provider Side

As if the lack of risk-reward relationship for patients weren’t enough, there’s another exacerbating factor in the system: The payment system rewards over-provision of services by providers. Our healthcare system utilizes a fee-for-service (FFS) payment model. If patients were responsible for paying the full costs of their care, the FFS model would be fine. However, in our system, it is not individual patients who pay for services, but rather, society as whole (through government and private insurance payers). Significantly, under the current system, there is no responsible party overseeing patient-provider transactions to restrain the prices or quantities of services negotiated. The lack of responsible oversight has led both to excessive prices as well as excessive quantities of services provided.

A Simple Model of Healthcare Costs

Let’s consider a simple model of healthcare costs to illustrate the two sets of distortions: Too much unhealthy care by patients and too many costly services by providers.

◊ Providers may either provide reasonable prices and quantities of services (R) or services that are costly (too many and/or too expensive) (column [F] in Figure 2).

◊ The costs to all providers of providing healthcare services increase with average price of healthcare services. As prices rise, rents and other input costs will rise. So even if providers choose reasonable prices and quantities of services, their prices will still be higher when the prices other providers are higher.

◊ Assume healthcare costs in a costly system are 4 times those in a reasonable cost system (columns [F] and [J] in Figure 2).

◊ Similarly to healthcare spending in today’s society,[1] the majority of spending is concentrated among a few high-cost patients (column [C] in Figure 2).

◊ Total costs of patient care are spread evenly among all patients so that all patients pay the same price for healthcare, regardless of their healthcare need (columns [H] and [L] in Figure 2). 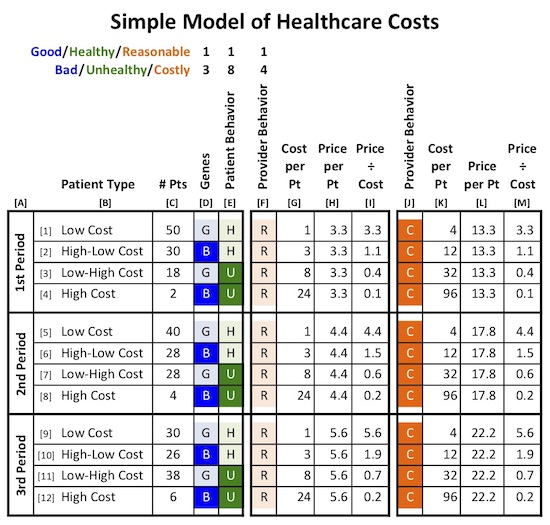 Under these assumptions, if patients with good genes choose:

Over time, the model suggests more patients choose unhealthy lifestyles and off-load their costs of healthcare onto others. Total spending on healthcare rises rapidly (the figures in columns [H] and [L] increase over time), and the extent of cross-subsidization of the costs incurred by unhealthier patients, but paid for by healthier patients, increases (the black and blue bars in Figure 3 increase over time). This is exactly what has been happening in our society over the past decades.

Figure 3: Cross Subsidization of Costs of Care for Unhealthy Patients Increases Over Time 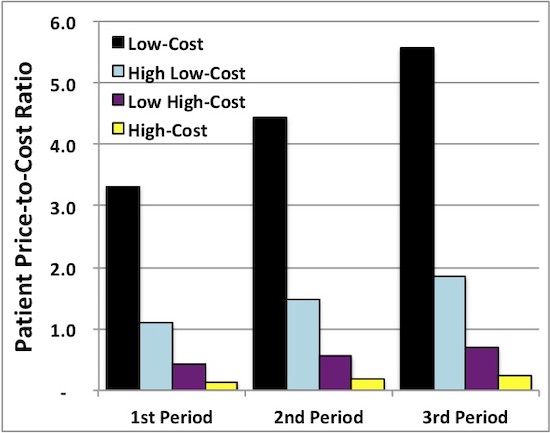 Our healthcare system is becoming increasingly unsustainable and thus ripe for change. As with other industries in the past that have become similarly unsustainable, there arise moments in time when the door to such convoluted industries opens to opportunities for increases in efficiency. These moments generally come when industries are deregulated or when landmark laws are changed. Other moments of opportunity occur simply when such industries become particularly ripe for change or when entrepreneurs present viable alternatives.

Under the traditional insurance model, it is the insurance companies who capture most of the savings generated by patients who choose healthier lifestyles. In contrast, under the cash model, it is the patients themselves who capture the full benefits of any savings in healthcare costs. So unlike the traditional insurance model, a cash-based model provides the proper incentives to patients to choose healthier lifestyles.

Regardless of the nature of the spark, the first thing to happen at these moments of change to historical industry configurations is cream-skimming: New suppliers steal away high-margin customers. Customers who have been paying much more than their fair share in the historical system become attracted to new products tailored to their particular needs. Yet, these high-margin customers are precisely those customers who have been enabling the functioning of the inorganic, or “unnatural,” historic system. Once enough elite customers leave the old system to enter a new system that better addresses their needs, the old system will collapse. At that point, a new system that better addresses the less-profitable (less-viable) part of the industry must be established to replace the old system.

The cash-based models of healthcare we are seeing today are most attractive to younger people who are already living healthier lifestyles. These are the people who incur fewer healthcare costs themselves, but who are being forced to pay exorbitant costs for healthcare in support of poorer and sicker patients. More of the “cream” – young and healthy patients – can be expected to leave the current system as new, cash-based (and other alternative) systems gain traction. Eventually, the traditional system will collapse. The good news is that cash-based systems are paving the way for a return to more affordable care. What new configuration will arise?