In addition to the myriad other laws and regulations, all states essentially have two basic requirements:

There are thus two possible paths to market (see Figure 1):

States’ experiences with the roll-out of cannabis markets have essentially shown that these markets have behaved just as basic economic theory would have predicted.

Market stability is all about balancing Supply and Demand 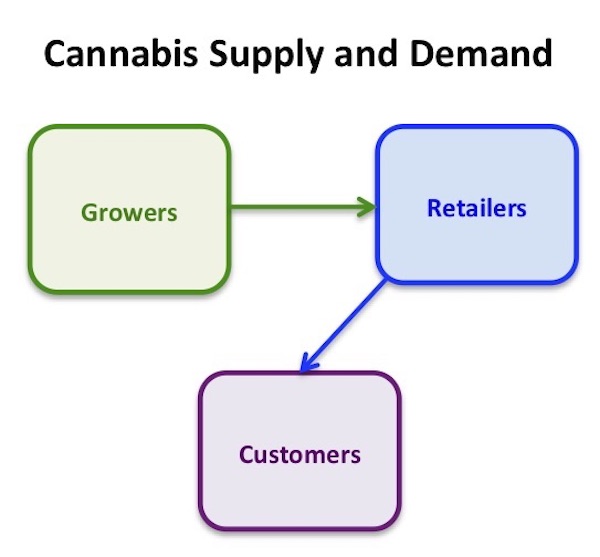 Market stability is all about balancing supply and demand. The essential players in a retail game generally include (i) companies involved in making the product (Growers or Manufacturers), (ii) companies involved in selling the product to customers (Retailers), and (iii) Customers themselves (see Figure 2). The cannabis market is no different. Behind the scenes in cannabis, Processors, Distributors, and Testing Labs also play key roles on the supply side (see Figure 1).

In their rollouts of legalized cannabis markets, states have generally experienced some combination of:

These problems are all due to imbalances in supply and demand. The fact that there have been supply chain imbalances is not surprising. After all, legal cannabis markets have accelerated from 0 to 120 (redlining it in many places) in a short period of time, where every piece in the supply chain has had to be established from scratch, or close to it.

You also have a lot of players in the game who are operating independently of one another. In that case, market mechanisms and incentives have to be well-designed, indeed, to yield coordinated outcomes among the separate players. Not a dance for the feint of heart. And extremely difficult to achieve in regulated markets that feature an abundance of constantly changing license requirements, regulations, and taxes at each segment along the supply chain.

A big problem with market misalignments is that they’re not fixed with surgical precision. Rather, they involve overshooting the target. So rather than having shortages in supply being increased just until supply equals demand, you get overshooting of production. So shortages are followed by gluts, which are then followed by shortages, and so on. Hopefully, the overshooting becomes less and less each period, but it generally takes some time to achieve balance.

New markets with large market potential all tend to follow the same path: A frenzy of suppliers enter the new market, creating a wild west in supply. Massive investments are made. There is a frenzy of activity. Many businesses go bankrupt. The market consolidates, where stronger and/or better-financed players buy up assets from bankrupt companies, generally for pennies on the dollar. Businesses that remain serving as the backbone of the industry are larger, stronger, and more vertically integrated than the original new entrants.

This same pattern has played out in cellular telecom, computer hardware, computer OS, as well as in each segment of internet businesses: social media, search, ecommerce, music, etc. Currently, the same cycle is playing out in autonomous vehicles, electric cars, electronic medical records, blockchain, AI, and IoT, just to name a few.

Type and extent of regulations will determine market structure

In regulated industries, the type and extent of regulations tend to determine market structure. Generally speaking, the greater or more extensive the regulations are, the fewer and more integrated the eventual suppliers will be.

In cannabis, limits on numbers of licenses issued, large licensing fees, high tax rates, and extensive and dynamic regulations make it costly and difficult for suppliers to enter the industry, and they cause imbalances in the supply chain. In these cases, unless restrictions prevent it, suppliers will either horizontally or vertically integrate, so as to either decrease costs and/or ensure stability in supply. 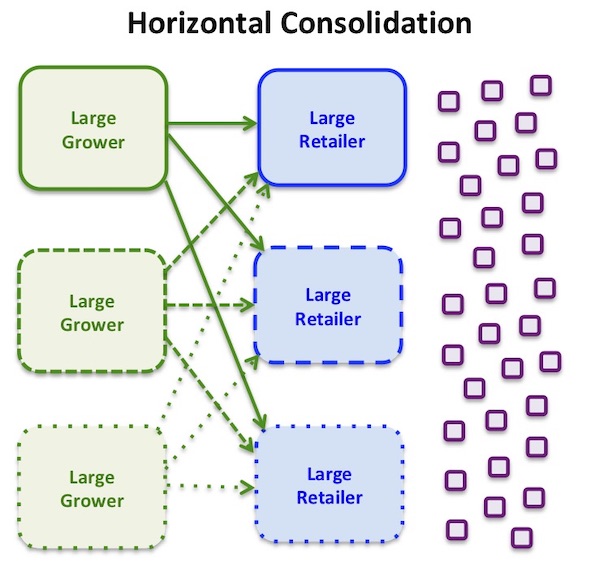 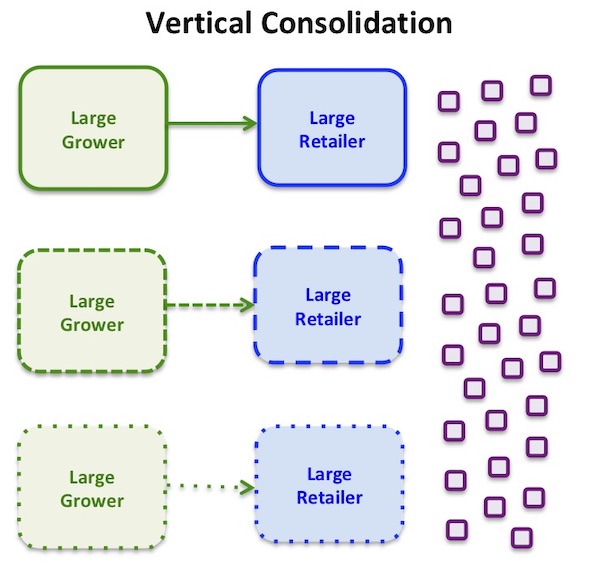 It appears that vertical integration has become the more prevalent short-term solution for managing instabilities in the supply-chain associated with rolling out completely new industries. This makes sense, since the initial priority is getting product to market.

Later however, after markets mature somewhat and supply chains have stabilized, I predict companies will spin off whole divisions and specialize in particular segments of the supply chain. The cannabis supply chain is complex (see Figure 5): there are many different products and processes involved at each stage of the value chain. And each stage of the chain is positively mushrooming with new knowledge and technologies to improve products and processes (for an analysis of cannabis patents, see “Trends in Cannabis Patents over Time”).

For regulated markets to thrive, regulators must either moderate taxes and regulations to ease the burden on legal market players or increase enforcement of black market activity. CA has raised tax rates[2] while also considering lowering them.[3] California and other states, such as Massachusetts, have also made some effort to arrest black market suppliers.[4]

"... an arduous tax burdens cultivators to the tune of $800 per pound of wholesale flower.

This drives some legal companies out of the market, giving illicit businesses a competitive advantage and pushing the need for licensed companies to vertically integrate to succeed."

"However, growers report some significant challenges persist, including:

• Taxes are too high. Flower is taxed at about $150 regardless of the price it fetches on the market, which cuts into profits.

• The illicit market continues to thrive, both in the cultivation and retail sectors."

Until regulators do a better job of minimizing black market competition to help legal market suppliers not just survive, but actually thrive, long-term survival of legal markets in cannabis will remain unstable.