Germany’s proposed cannabis regulations have been in the news recently.[1] They include a THC-based potency tax, that is, higher tax rates for products with higher THC content. These potency taxes differ in form from the excise taxes most commonly seen in the US, price-based excise taxes.

Taxes are an unfortunate part of life, and a much larger part of life in the cannabis industry than in most other industries. Besides being a burden, though, taxes also change consumers’ behavior. This fact leads me to wonder: What are the different tax systems currently being used across cannabis markets, and how will the different systems affect consumer behavior?

All the different forms of taxes – excise taxes, state and local sales taxes, social equity taxes, etc. – increase consumer prices in legal markets, making it difficult for legal businesses to survive,[3], [4] driving many consumers to Black Markets.[5],[6]  This is an unpleasant reality that legislators must understand when establishing cannabis tax structures and regulations.

Jackson Brainerd, Program Principal at National Conference of State Legislatures (NCSL), notes, “While robust revenue collections are typically associated with recreational marijuana sales, there are states that are generating a significant amount of revenue from medical marijuana programs as well.”[9] Since:

I’m simplifying my analysis by focusing on rec states.

All states that have legalized adult use (rec) cannabis have imposed both excise and/or sales taxes on cannabis activity. Most states – 15 of the 20 states that have legalized rec use – have imposed a uniform price-based excise tax. For example, both California and Colorado impose excises taxes on all dispensary sales to consumers of 15% of the product price, in addition to other state and local sales taxes. 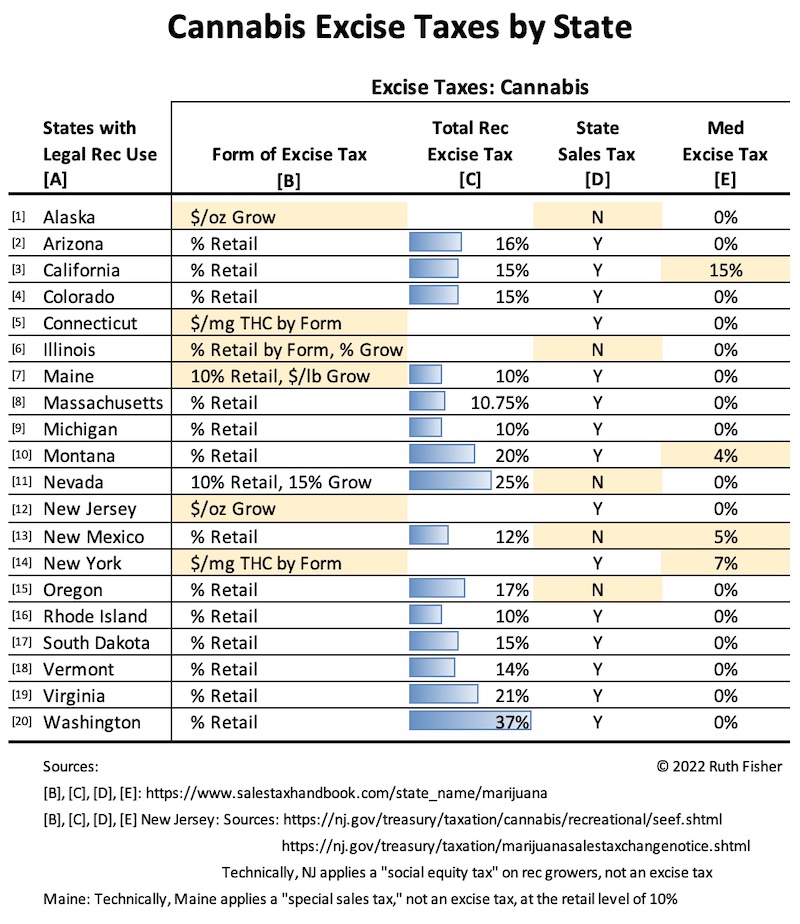 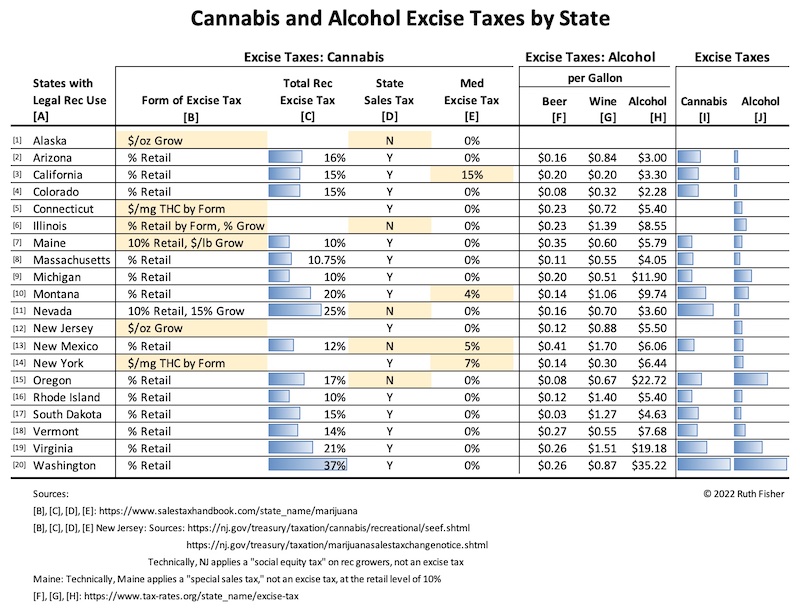 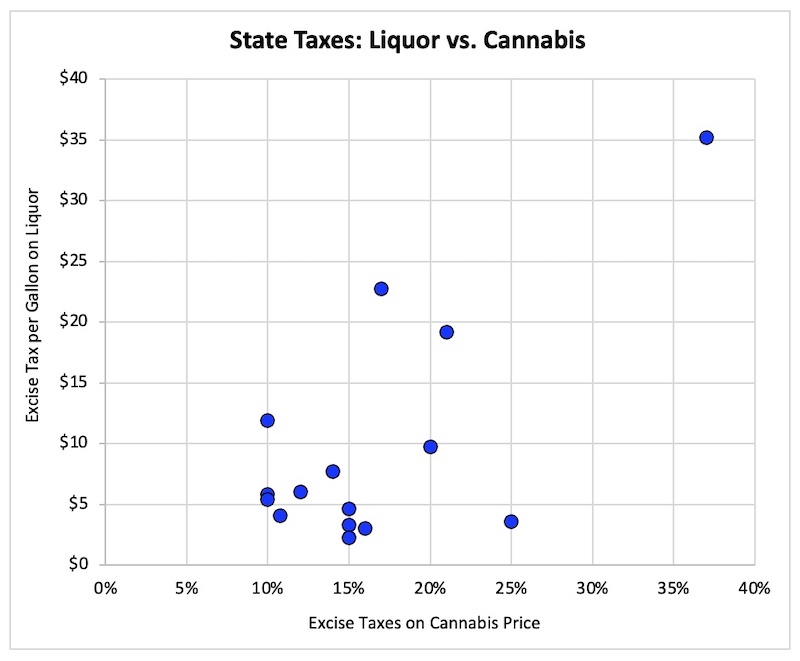 (Washington state has no state income tax. Perhaps the state relies on excise taxes to fund state activities more than other states that do have income taxes. However, a fuller analysis to understand why taxes differ as they do across states is not the focus of this study.)

Five of the states that have legalized rec cannabis activity impose alternative (to price-based) forms of excise taxes.

The three remaining states, Connecticut, Illinois, and New York, have imposed different combinations of excise taxes by potency and form of use (see Figure 4).

Illinois’s potency-based excise taxes are still price-based taxes, so we can compare them to the price-based taxes for the other states in Figure 1. However, the structure of taxes in Connecticut (CT) and New York (NY) makes them difficult to compare. To get better sense of the impact of the CT and NY taxes, I created an example using average 2020 and 2021 prices reported by Headset for Flower, Edibles, and Vape Pens.[12] The results are displayed in Figure 5. 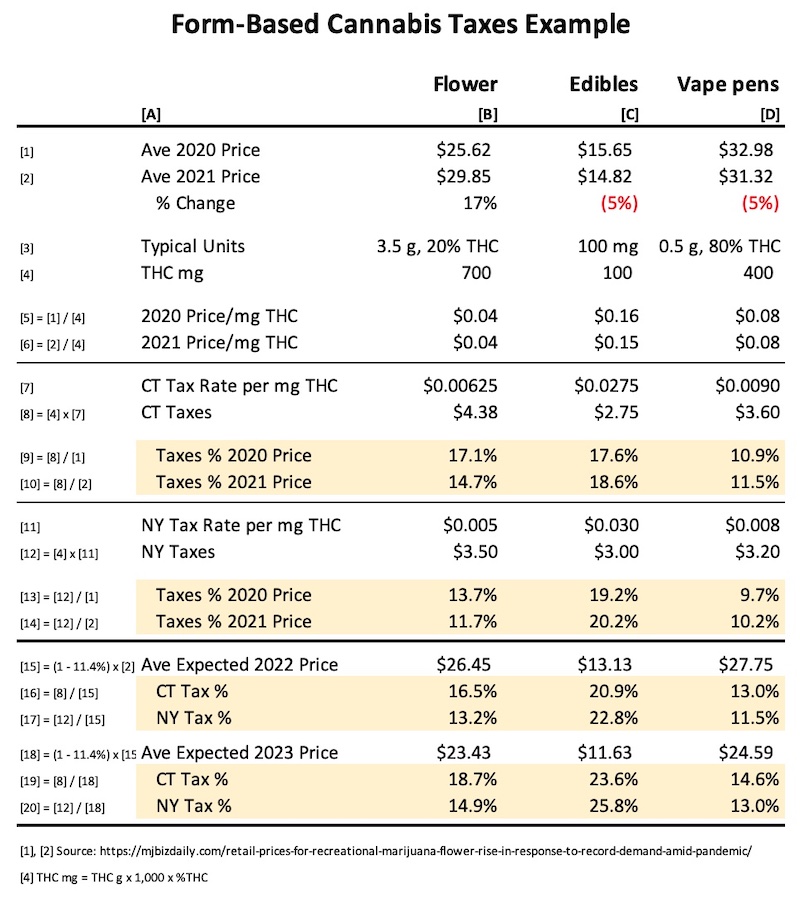 There are a couple of points to note that are illustrated in Figure 5:

Cannabis prices in Western states, which also tend to have older cannabis markets, tend to be lower than prices in Eastern states, which tend to have newer cannabis markets. If prices in CT and NY are, in fact, higher than the average prices reported here, then the tax rates (rows [9], [10], [13], and [14] in Figure 5) will be overstated. On the other hand, the state of CT portal for cannabis indicates, "In total, the tax rate is expected to be approximately 20 percent of the retail price of cannabis, in line with the tax rates in Massachusetts."[13]This is consistent with the excise tax rates calculated in Figure 5.

Now that we have a bit of a flavor for price-based and form-based cannabis taxes, let’s take a more general view to see how all the different tax structures currently implemented compare. A closer look at Figure 1 shows that there are actually five different types of excise tax structures being implemented: medical vs. recreational, price-based, weight-based, THC-content, and form of cannabis use. More detail in terms of how each tax structure works, together with advantages and disadvantages for each relative to other forms of taxation, are presented below and summarized in Figure 9.

In all states except CA, med users benefit from lower cannabis excises taxes than do rec users. In fact, in 16 of the 20 states, med users pay no excise tax on cannabis purchases, though they generally pay state and/or local sales taxes. One could argue that giving medical users a tax break recognizes the more dire circumstances of med users relative to rec users. On the other hand, to qualify for the lower tax rates, med users must:

In this sense, one could argue that giving medical users a tax break simply helps offset the additional cost burdens associated with participating in medical use channels. Otherwise, medical users would have a greater incentive to simply switch to rec and avoid all the extra costs.

More generally, governments often segment industries so as to be able to tax or subsidize segments at different rates. For example, diesel fuel, which is used much more heavily by drivers of commercial trucks than by drivers of passenger cars, is generally taxed at a higher rate than gasoline. The excess fuel taxes paid by commercial drivers can then be used to pay for road repairs, which makes sense, since heavier commercial vehicles cause more wear and tear on the roads.[14]

Of note is the fact that Illinois and Nevada levy price-based excise taxes on growers, in addition to price-based excise taxes at the retail level. Generally speaking, taxing suppliers at multiple points on the value chain is not a good idea, because tax rates compound. This leads to lower levels of supply and higher prices at the retail level than those that could be achieved using a single retail tax. Everyone loses.

Cannabis weight-based taxes impose taxes based on the weight – in ounces or pounds – of cannabis products, so that consumers pay higher taxes for heavier products. Weight-based taxes are independent of product price. This reduces the uncertainty surrounding tax burdens when prices are volatile, but it creates heavier tax burdens when prices drop. At the same time, however, it ensures legislators that product sales will achieve minimum level of tax revenues, even as prices drop.[15]

With weight-based taxes, growers have an incentive to minimize any excess weight of the biomass they sell to customers. The highest-value part of the cannabis plant is the trichomes or resin sacs, which are most densely concentrated on cannabis buds. Cannabis growers will thus maximize profits under a weight-based tax system by growing trichome-rich plants and selling the buds with as little of the other plant biomass as possible.

At the same time, however, in markets where THC is more highly valued than other substances in cannabis resin (e.g., other cannabinoids and terpenes), then weight-based taxes would incentivize growers to focus on high THC cannabis cultivars.

Chris Lindsey, the senior legislative council for the Marijuana Policy Project, who helped draft the IL cannabis legislation, indicated that the idea behind IL’s THC-content-based taxes was to “do something similar to alcohol and tax it at higher rates for those who want to purchase higher amounts.”[16]

Taxes (or package limits) on THC content discourage products with high THC content. On the one hand, this encourages the supply of products with more non-THC cannabis substances, namely CBD and other minor cannabinoids, terpenes, etc. At the same time, trying to sell products with less THC and more other cannabinoids and terpenes might induce sellers to provide more education to consumers about the benefits of all the other non-THC substances in cannabis.[19] This would definitely be a good thing for the industry as a whole.

Potency taxes are highly disputed by the cannabis community. Many disadvantages of such taxes have been noted, including the following.

How much more of the 10% THC sample do you have to smoke to consume, say, 25 mg of THC? The answer is that you have to smoke ½ of the joint instead of 1/6 of the joint. (see Figure 7). In other words, if you want to consume some fixed dose of THC, it’s not that difficult to get there using weak cannabis rather than strong cannabis. A potency tax on cannabis will thus not have a great deterrence effect on people who want to consume moderately high amounts of THC. 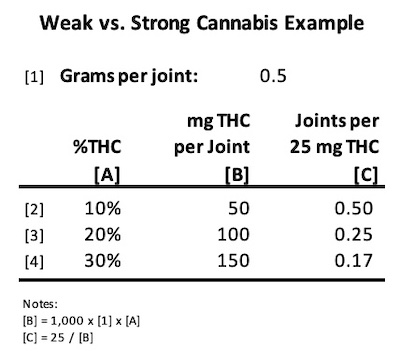 CT defines edibles as products “containing cannabis or cannabis concentrate, combined with other ingredients, that are intended to be ingested”.[26]

NY defines an edible as, “a product containing either Cannabis or concentrated cannabis and other ingredients, intended for use or consumption through ingestion, including sublingual or oral absorption.[27]

NY defines concentrates as “the separated resin, whether crude or purified, obtained from cannabis; or a material, preparation, mixture, compound or other substance which contains more than three percent by weight or by volume of total THC.[28]

In NY concentrates include dabs and vapes, whereas tinctures are considered a form of edible.

At the same time, preferences for specific forms of cannabis use differ by customers’ age/generation (see Figure 8). Form of use taxes will thus discriminate for or against certain generations. 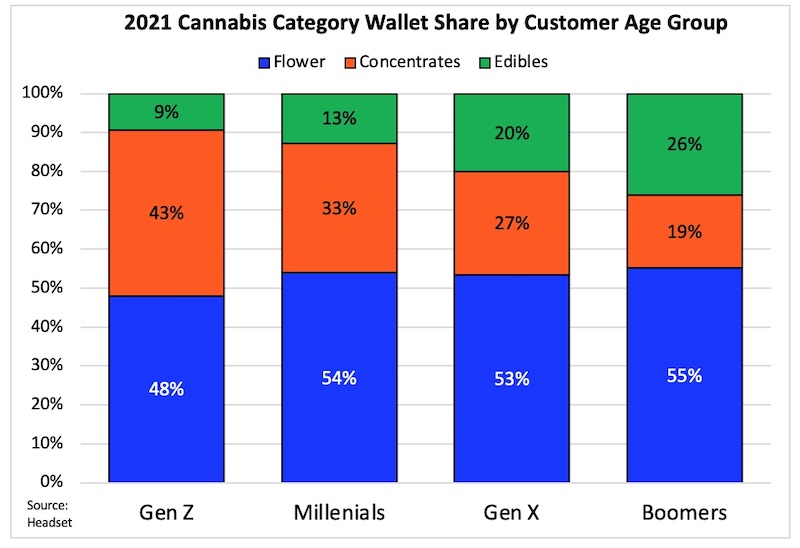 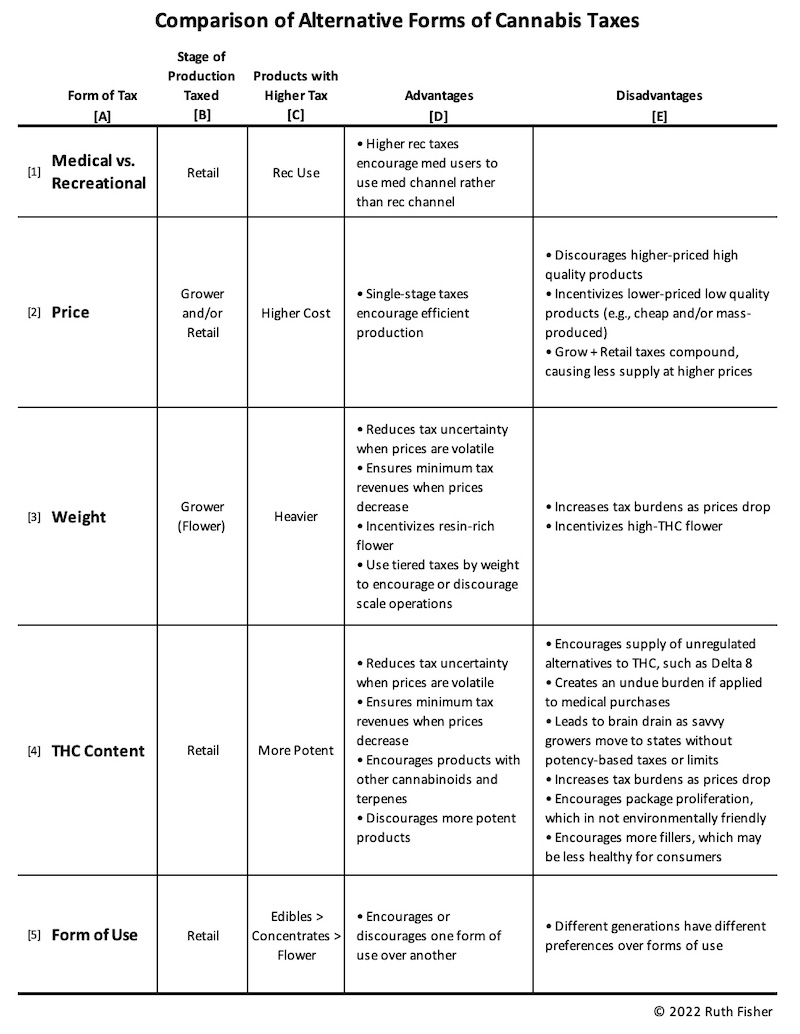 Taking as given that all taxes distort activity, what can be said about the best form of tax for cannabis? Aspects of the cannabis market environment I think are important to consider are:

Generally speaking, it’s more efficient to tax final goods than raw materials because you can achieve the same tax revenues with greater supply at lower prices. Basically, it’s the idea that you can use lower tax rates by spreading the tax burden over a larger tax base. In the discussion at hand, this means it’s generally better to tax retailers than growers.

However, what we’re seeing in cannabis is increasing consolidation of grow operations, where legacy growers are being squeezed out of the market. Consolidation of operations generally leads to more mass-product flower and less variety. I, for one, don’t want cannabis to end up like the US beer market, where two suppliers, Molson Coors and AB InBev, supply 60% of the market.[3] In this case, a tax on growers might better encourage less consolidation of growers, at the expense of slightly higher tax burdens. Obviously, others may disagree.

Tiered, price-based and weight-based grow taxes, with higher tax rates at higher weight tiers, and with separate tax rates for flower and trim seem to achieve most of the goals. Figure 10 provides an example of what this type of excise tax might look like. 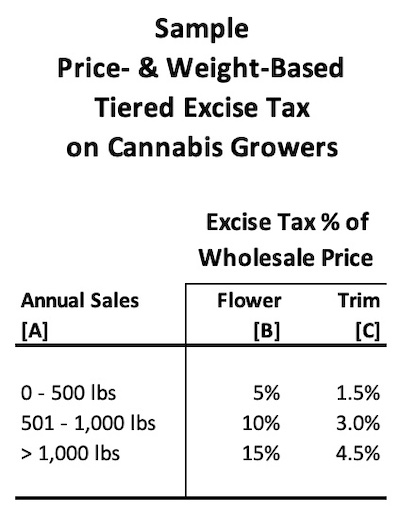 In other words, like income taxes, all growers pay the same rate on the first, say, 500 pounds of flower or trim they grow, they pay a higher rate on the next 500 pounds they grow, and they pay the highest rate on anything they grow above 1,000 pounds each year. This form of tax would achieve the following:

This tax structure does not discourage consolidation of retailers, which might be considered a problem. On the other hand, by encouraging variety in the supply of flower, perhaps encouraged by direct-to-consumer sales by growers, competition among retailers may still force dispensaries to offer decent amounts of product variety to consumers at reasonable prices.

Will the Fed Raise Rates? Will the US Dollar Lose Reserve Status?

Why Is Cannabis Such a Tough Nut to Crack? A Synopsis of Supply and Demand Complexities

Written by Ruth Fisher on Tuesday, 10 May 2022. Posted in Insights Blog

Written by Administrator on Monday, 09 May 2022. Posted in Insights Blog

Arguments For and Against Caps on THC Potency