The information in this post was compiled in an attempt to understand 2 issues:

Hemp for Fiber vs. Seed vs. CBD

The hemp plant has the potential to contribute resources into the production of a profusion of different end products. These end products are generally sourced from one of three parts of the plant: stalk, seeds, or flower (see Figure 1).

Currently, some hemp suppliers cultivate single-use (stalk or seed or CBD) hemp, while others grow dual-use (stalk and seed or seed and CBD) hemp. At the same time, marijuana cultivators also supply the market with CBD (see Figure 2).

Based on the incentives facing different players in the US medical cannabis market, I believe the market will not achieve mainstream adoption unless or until the US overcomes several hurdles: (i) the classification of cannabis as a Schedule I drug, (ii) cannabis’s lack of FDA approval, (iii) the lack of clear information about and trust in cannabis as a safe and medically efficacious product, and (iv) the social disapproval of cannabis use by a significant portion of society.

Players in the Medical Cannabis Game

Let’s start by examining the incentives facing the main participants in the medical cannabis market. 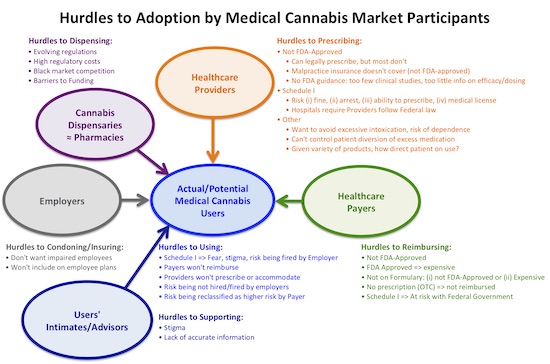 Timeline of US Marijuana Laws

California Is Different from Other Legalized States

Description and Implications of CA Legislation

Key players in the Marijuana Transition Game include:

This analysis examines how the market has evolved to date and how we think the market will continue to evolve in the future.

Why Is Alcohol Accepted While Cannabis Is Not?

Alcohol Use In America

Cannabis Use In America

What Determines an Activity’s Prevalence?

The Role of Common Knowledge

Both alcohol and cannabis have been around for thousands of years, and both have been used for recreational, spiritual, and medical purposes. Both have been a part of life in America since our country’s founding. And to a greater or lesser extent, both have been socially accepted at times, while being prohibited at other times. For the past century, however, there has been a distinct difference in social attitudes between the two: while people tend to accept or reject alcohol, they don’t react to it with fear, a sense of taboo, or disgust, like they do with cannabis. Why is that? This analysis attempts to understand why people tend to accept alcohol but denounce cannabis.

To better understand Americans’ attitudes toward alcohol and cannabis, I first examine the role each has played in America’s history. Next, I examine the nature of social acceptance of alcohol vs. cannabis, and then I propose some explanations as to why alcohol has been accepted, perhaps grudgingly at times, while cannabis has been so adamantly rejected.

I conclude that alcohol has always been used overtly, so everyone can see its effects. Users have validated its use and effects for other users and non-users. However, cannabis has always been used covertly, so people can’t see that it’s safe, enjoyable, and effective for treating medical conditions; that is, users have not been able to validate cannabis use for other users and non-users. The overt vs. covert behavior has created feedback loops encouraging acceptance of alcohol, while enabling the contiued stigmatization of cannabis.

Alcohol Use in America

A Brief History of Alcohol Use in America[1]

Since America’s founding, alcohol has been a part of everyday life.

The colonists brought with them from Europe a high regard for alcoholic beverages. Distilled and fermented liquors were considered important and invigorating foods, whose restorative powers were a natural blessing. People in all regions and of all classes drank heavily.

Drunkenness was considered a “personal indiscretion”:

Drunkenness was condemned and punished, but only as an abuse of a God-given gift. Drink itself was not looked upon as culpable, any more than food deserved blame for the sin of gluttony. Excess was personal indiscretion.

Drunkenness was controlled using a combination of physical sanctions (fines or whippings) and conventional mechanisms for control, including limits on tavern hours, requirements for taverns to provide food and lodging, and limits on who taverns could serve, as well as the activities in which patrons could engage.

During the late 1700s through the mid 1800s, however, society experienced rapidly growing immigration, industrialization, urbanization and social change (see Figure 1). Immigrants flooded cities from rural parts of the US and from foreign countries. Massive dislocations, together with loss of support systems, left many unable to cope. They found solace in taverns.

At the same time, the nature of taverns changed, from one overseen by respectable members of society who maintained social control, to one run by “common folk” seeking to commercially exploit liquor.

These radical social changes created a breakdown in the social norms that had previously discouraged alcohol abuse. Heavy drinking became much more common and caused numerous problems: people were late to work and unable to fulfill their job functions, and drunken men were abusing their wives and children or leaving them without means of support.