Why Do Economists Think Free Trade Is So Wonderful, While Many Others Do Not?

I think the differences in perspectives on free trade between economists and others (dare I say “normal people”?) comes down to the difference between

Economists’ basis for touting the benefits of free trade comes from David Ricardo’s Theory of Comparative Advantage, developed in 1817: Countries can do better by specializing in producing what they do well and trading for goods in which other countries do well. Specialization will lead countries to maximize the size of the global output pie. Then, theoretically, everyone can be made better off by redistributing some of the income from those who gain to compensate those who lose.

Let’s consider an example. Suppose you have two individuals, Jim and Marla, each of whom can produce the necessities, pizza and beer, by themselves. Suppose that with an hour of labor,

If Jim and Marla work on their own and divide their time evenly between production of beer and pizza, devoting one-half hour to each, then

Jim gets less pizza, one-half of a pie, than he might want with his beer, while Marla gets plenty, three whole pizzas.

Now suppose that instead of each eating what he or she produces, Jim and Marla decide to specialize in doing what each does best and then jointly splitting the output. In this case, after an hour of dedicated work

In the case of specialization and trade, Jim is made much better off with three pizzas instead of just one-half a pizza, while Marla is no worse off than she was without trade. 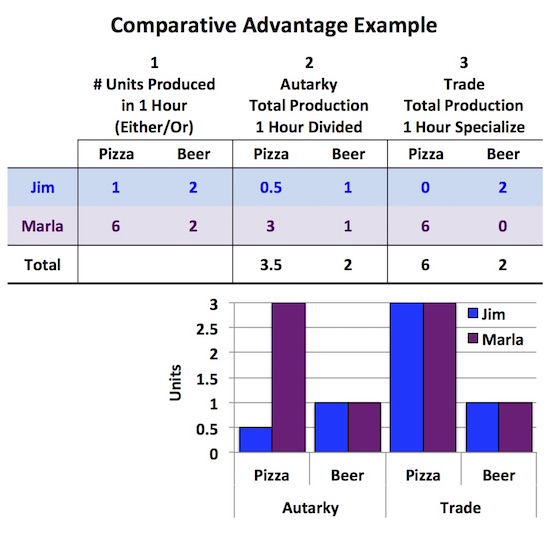 There are four different factors in particular that lead the reality of free trade to not living up to the theory: (i) Lack of sufficient redistributions from winners to losers, (ii) Terms of trade favoring special interests, (iii) Illegal or unfair trade practices, and (iv) Different standards of production.

As indicated above, under the Comparative Advantage Theory of free trade, countries will maximize the size of the global output pie by specializing in what they do well and trading for the rest. Then, everyone can be made better off by redistributing income from those who gain to those who lose.

In reality, the losers from trade have historically not been compensated enough to make them better off with trade than they would have been without it. So while total global wealth might, in fact, be greater with trade, the winners end up with the majority of gains, while the losers are left with the short end of the stick.

The premise that everyone can be made better off from trade depends on the assumption that countries efficiently specialize in what they do best and trade for the rest.

In reality, however, the industries in which a country will end up specializing (exporting) are not necessarily based on comparative advantage, but rather, favored representation in trade negotiations. More specifically, trade deals often grant certain agents special access to foreign markets, for example through export subsidies. Other trade deals create restrictions on imports to limit competition in local markets, for example, though tariff or quotas. These types of trade deals generally reduce global efficiency, rather than promoting it. In particular, they end up enabling unwarranted transfers of wealth to the favorably represented agents from other industry participants (i.e., unrepresented foreign and domestic consumers and producers in the favorably represented agents’ industry).

As exporting industries grow large with increases in trade, the potential for ever more wealth can leader exporters to engage in corrupt or otherwise extreme practices, which may very well leave other domestic and foreign parties worse off. And the large scale of production has the potential to generate high levels of damages to other parties.

As an example, as Chinese manufacturers started exporting their goods to other countries, the profits attracted ever more investments in Chinese productive capacity. This led to excess capacity, which then led some manufacturers to engage in predatory trade practices, such as dumping large quantities of goods in foreign markets. Such activities use excessive resources in the home country (such as causing too much pollution), thereby leaving Chinese citizens worse off. At the same time, the predatory low prices harm the producers in foreign countries who are unable to compete with the dumped goods.

Finally, in some countries a comparative advantage is at least partially due to different (i.e., less costly) regulations or standards of production than those in other countries. For example, Asian countries don’t generally have the same levels of (i) worker protections, (ii) quality standards, or (iii) environmental standards as those in Western countries.

In short, while free trade presents great potential for improving global well-being in theory, the reality of free trade has not quite lived up to the theory. Don't get me wrong — Trade among countries definitely provides benefits. However, as markets have grown to become more global in size, abuses associated with the magnitudes of production in exporting countries have exacerbated the differences between the benefits of free trade in theory and those in reality. So perhaps economists who continue to unequivocally tout free trade are too focused on theory and need to get out into the real world to see how trade is actually working in practice.