What Charles Dickens wrote 150 years ago before and during the French Revolution rings eerily familiar today. The upper classes in the US today have never had it better: health, comfort, and convenience like no other time in history. Yet, at the other end of society lies a rising tide of homelessness, addiction, and mental illness.

What contributes to peoples’ health and well-being, and why are we simultaneously experiencing such highs and lows in society today?

Technology has enabled people to amass wealth like never before. Advances in communication and transportation technologies in particular have given us access to whole new markets that have rained untold wealth on those who have been able to master them.

Yet, technological avenues to amassing wealth require access to resources, information, and expertise that are not accessible to many people in today’s society.

There’s more. Technology is a tool. It can be used either to the benefit or to the detriment of select individuals and, more broadly, of society as a whole. Plenty of technologies have been developed and used to increase social well-being overall. These are positive-sum uses of technology, and they should be applauded. Unfortunately, plenty of other technologies have been developed and used to promote the well-being of some, but at the greater expense of others, leading to losses in social well-being overall. There are zero-sum or negative-sum uses of technology.

Throughout history, the vast majority of society has struggled to earn enough money to meet the basic needs for food, clothing, and shelter. Most people in pre-industrial and industrial societies thus focused almost exclusively on tangibles, namely, producing and consuming food, clothing, and shelter. During these times, growth in social well-being was effectively measured by growth in the value of tangibles: outputs, costs, and profits.

Only in the post-industrial world have most people been able to surpass the basics, to the point of being able to shift their focus away from lives of survival and focus instead on a lives of fulfillment. As post-industrial society as a whole has become wealthier, however, tangibles no longer provide good approximations for measures of well-being. Rather, well-being is increasingly determined by intangibles: our sense of belonging, esteem, and fulfillment in society. Yet, instead of adapting to the shift towards intangibles, society has continued to focus on what’s been traditionally – not to mention easily – measured, tangibles. Yet, measuring and managing tangibles has provided a false sense of prosperity – great monetary wealth by many members of society – when we what we should have been measuring and managing are intangibles – which would have captured increasing marginalization and disconnection by other members of society.

A serious consequence of our misplaced focus on tangibles is our focus on monetary wealth and consumerism as a measure of success, rather than on belonging, esteem, and fulfillment. “He who dies with the most toys wins” has become the mantra in today’s society, as opposed to, say, “he who dies with the greatest sense of happiness wins.”

People achieve well-being by being supported and empowered to fulfill their dreams and desires. The 2019 World Happiness Report (WHR) found that the most important determinants of peoples’ well-being, in decreasing order of importance, are:

The Role of Technology in Increasing Social Well-Being

I’ve been on a long journey, studying individual well-being throughout history, and in particular, the role technology has played in increasing peoples’ well-being. The thesis I’ve developed is this. 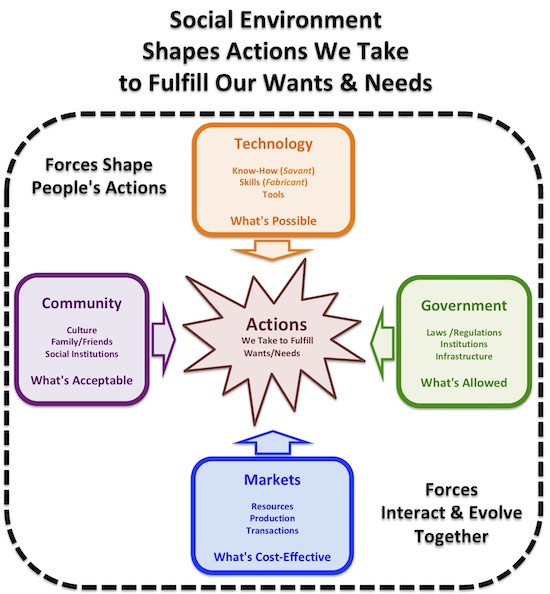 These four sets of forces jointly determine the actions people take at any point in time to meet their wants and needs. Taken as a whole, the collective actions taken by all people in society create outcomes at the social level, namely, the magnitude and growth of social well-being. Noteworthy is the multiplicative, not additive, strength of the combined forces. That is, a society with a “poor” culture can lead to social malaise, even with superb Technology, Markets, and Government. At the same time, a society with “strong” Culture, Technology, Markets, and Government will generate high levels and rates of growth in social well-being.

Next post in series: The Four Social Forces That Shape Our Actions