Electric scooters (“e-scooters”) are one of the latest hot new tech toys on the scene. Several start-ups have unloaded thousands of rentable e-scooters onto the streets of major cities in the US. The scooters offer users a cheap and convenient way to travel short distances across town. These scooters are dockless: users leave them on the anywhere on the street -- no need to find a docking station at a predetermined location. Quite the convenience for users. But quite the hazard and eyesore for local residents, who are finding scooters indiscriminately strewn about the sidewalks.

I realized that two trends have quickly engulfed our cities. First, capitalism has provided ever more modes of transportation – types of vehicles – to move us from one place to another. And second, city and suburban roadways have become much more congested. Together, these two trends are creating a fantastic game between people using different modes of transportation to get to where they want to go, as quickly, conveniently, and cheaply as possible.

The analysis will then move on to examine the broader Public Roadways Game. This game examines the dynamics among all the different users of public roadways, together with other interest groups whose actions affect the use of public roadways.

Smartphone manufacturers, such as Apple and Samsung, have thrived for the past fifteen years using a specific business model that involves

(i) Swiftly releasing next generation products that contain significant advancements over previous generations of products, and

(ii) Selling next generation technologies at a premium. 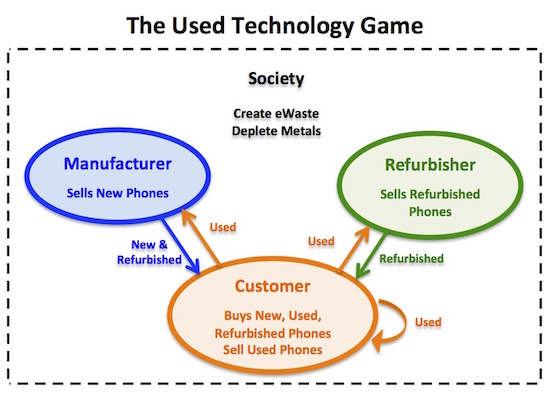 Before we can understand the issues related to 360°, 3D, AR and VR technologies, we have to understand some key concepts.

The goal of 360°, 3D, AR and VR technologies is to immerse users in an environment, so that they feel they have been “teleported” to this new locale and are actually present in this new world. Achieving immersion and presence requires that the brain be fooled by the senses into believing it is somewhere that it really is not.

Here are descriptions of immersion and presence by some other sources:

Total immersion means that the sensory experience feels so real, that we forget it is a virtual-artificial environment and begin to interact with it as we would naturally in the real world.

Virtual reality immersion is the perception of being physically present in a non-physical world. It encompasses the sense of presence, which is the point where the human brain believes that is somewhere it is really not, and is accomplished through purely mental and/or physical means. The state of total immersion exists when enough senses are activated to create the perception of being present in a non-physical world.

a sense of immersion (i.e. convincing the human brain to accept an artificial environment as real).

… presence: “The unmistakable feeling that you’ve been teleported somewhere new.

… presence. That is, the ability to take you somewhere other than where you really are, and trick your mind into believing it.

Jonathan Strickland at How Stuff Works

In a virtual reality environment, a user experiences immersion, or the feeling of being inside and a part of that world.

This post continues the discussion about what society needs in addition to technology to develop. In my previous entry, The Growth and Development Paradox, I established that

Let’s consider the automobile as a case study of what else society needs, in addition to technology alone, to be able to develop.

Most people would agree that the automobile has been one of the most influential technologies of all time. Since its inception in the late 1800s/early 1900s, the automobile has fundamentally shaped American society: it has provided unparalleled mobility to the masses, engendered suburbia, empowered women to take a more active role in society, created numerous jobs, and shaped our leisure activities (cruising and road trips, drive-in movies and restaurants, etc.).[1] In short, the motor vehicle has turbo-charged social development.

Automobiles replaced railroads, horse-drawn carriages, and bicycles as more comfortable, convenient, and efficient means of traveling short and long distances.[1] However, in addition to automobile technology, widespread adoption of the automobile in the US required the majority of Americans to have: (i) disposable income and access to affordable automobiles; (ii) roadways and infrastructure; (iii) widely available sources of fuel and repair services; (iv) public space for parking; and (v) education and licensing programs to teach people how to drive and how to follow the rules of the road.

The malaise that pervades society today has become undeniable. We’re feeling a loss of connection and a loss of purpose in our lives. I believe this problem has been brewing for quite some time, and I believe it’s due to a confluence of factors that have been evolving over time, at least since the post-WWII era especially in the US, but also in the larger developed world. The factors involve changes in the environment in which we live, due to mutual interactions of social norms, technological development, government, and markets.

I have blogged in the past about how these four forces -- social norms, technological development, government, and markets -- interact and drive social evolution. I have also contemplated writing a book on the subject. However, the issue of the social unrest we’re experiencing comes up so often that I decided to briefly summarize what I believe are the major drivers of the problem and to briefly suggest how we approach a solution.

Very briefly, the big factors that have been evolving over time and creating social problems include the following.

The Four Social Forces That Shape Our Actions

Our desire to fulfill our wants and needs motivates us to act.

A lot has been written about what, exactly, constitute our wants and needs as human beings. Examples include: 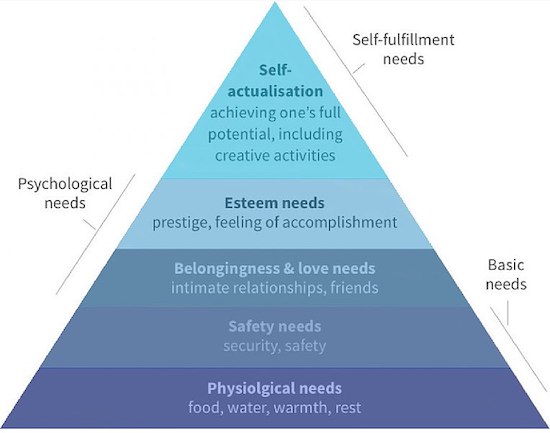 Human wants and needs are internal drives, and they have remained largely unchanged over the millennia. What have changed, though, are our external expressions of those drives, that is, the actions we have taken to fulfill them. Suppose, for example, you’re hungry, and you want to get something to eat. What actions will you have taken in different environments to satisfy that same need for food?

The Growth and Development Paradox

Wheat yields in the UK hovered around ½ tonne per hectare for hundreds of years (see Figure 1). Imagine being able to generate no more wheat per unit of land than your ancestors who had lived 100 generations before you had been able to grow! The introduction of crop rotation was the first major breakthrough, roughly doubling yields. Later, during the Industrial Revolutions, the invention of new farm tools, such as the seed drill, brought still greater yields. Truly momentous gains in productivity, however, didn’t appear until the 20th century: The use of cross-breeding to create more resistant strains, together with the use of fertilizers and pesticides, achieved enormous gains in yields.[1]

Improvements in technology and know-how have increased crop yields. Societies have thus been able to devote fewer resources — land and labor—to generate the food we need to nourish members of society. Freed-up resources have been redirected to fulfill other wants and needs.

Development, on the other hand, is output or per person, a measure of the standard-of-living. Development requires more than just additional people. A society develops when its citizens can produce more output from the same amount of input. Development happens when people become more productive, that is, when they gain know-how or improve technology.

Puzzle Piece #1: It doesn’t take long to realize how important technology has been historically for enabling social development and increasing our standard of living.

What Charles Dickens wrote 150 years ago before and during the French Revolution rings eerily familiar today. The upper classes in the US today have never had it better: health, comfort, and convenience like no other time in history. Yet, at the other end of society lies a rising tide of homelessness, addiction, and mental illness.

What contributes to peoples’ health and well-being, and why are we simultaneously experiencing such highs and lows in society today?

Technology has enabled people to amass wealth like never before. Advances in communication and transportation technologies in particular have given us access to whole new markets that have rained untold wealth on those who have been able to master them.

Yet, technological avenues to amassing wealth require access to resources, information, and expertise that are not accessible to many people in today’s society.

There’s more. Technology is a tool. It can be used either to the benefit or to the detriment of select individuals and, more broadly, of society as a whole. Plenty of technologies have been developed and used to increase social well-being overall. These are positive-sum uses of technology, and they should be applauded. Unfortunately, plenty of other technologies have been developed and used to promote the well-being of some, but at the greater expense of others, leading to losses in social well-being overall. There are zero-sum or negative-sum uses of technology.