The Growth and Development Paradox

Wheat yields in the UK hovered around ½ tonne per hectare for hundreds of years (see Figure 1). Imagine being able to generate no more wheat per unit of land than your ancestors who had lived 100 generations before you had been able to grow! The introduction of crop rotation was the first major breakthrough, roughly doubling yields. Later, during the Industrial Revolutions, the invention of new farm tools, such as the seed drill, brought still greater yields. Truly momentous gains in productivity, however, didn’t appear until the 20th century: The use of cross-breeding to create more resistant strains, together with the use of fertilizers and pesticides, achieved enormous gains in yields.[1]

Improvements in technology and know-how have increased crop yields. Societies have thus been able to devote fewer resources — land and labor—to generate the food we need to nourish members of society. Freed-up resources have been redirected to fulfill other wants and needs.

Development, on the other hand, is output or per person, a measure of the standard-of-living. Development requires more than just additional people. A society develops when its citizens can produce more output from the same amount of input. Development happens when people become more productive, that is, when they gain know-how or improve technology.

Puzzle Piece #1: It doesn’t take long to realize how important technology has been historically for enabling social development and increasing our standard of living.

Now think about how many really important technologies have been around for thousands of years. For example,

Puzzle Piece #2: The forerunners of today’s foundational technologies have been around for thousands of years.

Finally, Figure 2 is a graph using data from on Our World in Data that shows historical per-capita GDP from 1 AD through the present for Great Britain. 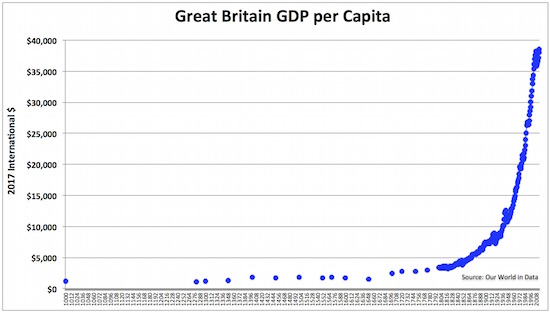 What’s glaringly noticeable about this graph is the fact that average income was roughly constant from as far back in time as we can imagine, up until about 1500 AD. That’s 1500 years of no real increase in the standard of living for the average person – despite the fact that foundational technologies had existed for hundreds, or even thousands, of years!

Puzzle Piece #3: It wasn’t until the First and Second Industrial Revolutions (starting in the late 18th century) that sustainable development occurred.

So putting the pieces together, we see that:

And foundational technologies have existed for thousands of years,

Yet sustainable development didn’t occur until the Industrial Revolution.

Technological development is thus not sufficient for societies to develop. There’s something else — in addition to technology —that’s necessary for society to develop.

What else do we need besides technology for society to develop???

This is the subject of my quest.

The answer will have important implications for the forces in society who think technology alone will be enough to solve our problems...

Previous post in series: The Four Social Forces That Shape Our Actions